The Microsoft UK chief marketing officer is honing its strategy of promoting the parent brand as well as its many products, at the same time as steadying the ship.

For someone five months into a new role, with the task of aligning the marketing of some of the world's biggest technology brands, Philippa Snare seems very relaxed.

What makes the demeanour of Microsoft UK's chief marketing officer all the more remarkable is that her role was the result of a global restructure that led to a marketing shake-up and some high-profile departures from the UK business.

Building on the restructure

The merger last July of Microsoft UK's consumer and online divisions with the central marketing group, forming an enlarged marketing and operations division, left several roles defunct. The first to go was Ashley Highfield, the digital industry figure known for launching the BBC iPlayer, who left Microsoft to join embattled Johnston Press as chief executive, after his role as managing director and vice-president of consumer and online became redundant.

Subsequently, Scott Dodds, who was appointed head of the new marketing and operations division, began the search for a chief marketing officer to steady the ship.

At the time of this turmoil, sources close to Microsoft said the time was right for it to select someone who was a good cultural fit. The October appointment of Snare, who has held various roles in the company over the past 12 years, fitted the bill.

Maybe it is due to her stalwart status, or the fact that she has been through both centralisation and decentralisation at Microsoft before, but Snare plays down the effect of the changes on the business.

'Microsoft reorganises all the time. It's just part of its way of working and how it keeps itself agile,' she explains coolly.

'Within the current economic environment it's a natural thing to look at where you get economies of scale and where you get consistencies. Marketing is one of those areas you can create a centralised service to support the business and get greater impact with the money you spend.'

As chief marketing officer, Snare's remit covers consumer and commercial marketing communications, internal communications, digital platform (search and online), data analytics, customer relationship management and agency management within the marketing and operations division. The creation of the unit is part of a global strategy to ensure brands carry the same message – which, she admits, Microsoft 'can do a lot better'.

Snare points out that it has grown independent business areas, such as games console Xbox or Dynamics, its enterprise software applications, 'very successfully', and created 'strong brands, products and service experiences within those groups'.

While these products have retained their specialist marketing teams, they require consumer and commercial marketing communication services, which Snare's department provides. This is to make sure they align with the 'brand promise', which is about 'trust, innovation, scrutiny and privacy', she says. 'Not all sexy words, but it is what Microsoft delivers and has always delivered,' she adds.

Some commentators have claimed that Xbox's strong brand identity is due to it being widely perceived as separate to Microsoft. Snare disagrees, however.

'Xbox, Office and Windows are brands in their own right and stand for different things. Microsoft, like Procter & Gamble or Unilever, enhances its products when its brand name sits alongside it,' she argues, adding that Microsoft has long held the view that it is a 'house of brands' rather than a 'branded house'.

Nonetheless, Snare admits that Microsoft has 'been through some tough times in terms of perception of competitors being cooler, more agile and overtaking us in some business areas, which has knocked people's confidence in the past few years'.

The strategy to align the brands under the Microsoft umbrella was first seen last December, when a TV ad showed a family in a living room using Windows, Windows Phone, Kinect for Xbox and Office to demonstrate how the brands fit together, and into consumers' lives.

While Microsoft has rolled out single-brand campaigns since, the most recent examples being for Skype and Internet Explorer, Snare says the umbrella approach will apply to future marketing activity, with a 'back to school' multi-product campaign planned for September.

She concedes that having such a broad portfolio of enterprise and consumer products, which has expanded over the decades from desktop PCs into online, mobile, gaming and advertising, can be a 'double-edged sword'. After all, Microsoft is frequently compared with smaller or newer competitors – not least Google and Apple, which was founded one year after Microsoft in 1976.

While it is not enjoying the steep growth of these rivals, Microsoft posted revenues of $17.4bn (£10.8bn) for the quarter ending 31 March, a 6% increase year on year.

Microsoft, which has a market capitalisation of $260.3bn (£161.3bn), has made a series of high-profile and strategic investments during the past 12 months. These include Skype, the internet telephony and video-calling service, for $8.5bn – its biggest acquisition to date. Snare says Skype has 'a lot to offer' Microsoft.

Other major deals include a strategic relationship with Nokia, intended to boost the pair's share of the smartphone market and, more recently, a $300m investment in a new, unnamed, subsidiary of bookseller Barnes & Noble's Nook eReader and tablet business.

With the launch of the Windows 8 operating system on the horizon, Snare says employees are starting to feel 'like it is time for us to show what we are capable of and that Microsoft is still innovative'.

Whipping out her Windows Phone, she cites this as a cause for further excitement around the business.

One of the main criticisms of the platform is that developers are not creating as many apps for it as for Apple's iOS or Google's Android, which, in turn, deters consumers. Snare, however, tries to reframe this apparent weakness with a humorous swipe at Apple: 'We wanted to avoid having the 100 fart apps available on other platforms.'

Microsoft has had its fair share of competition wrangles over the years. Earlier this month it was hit with a public complaint made by Mozilla, maker of the Firefox browser, that some versions of the Windows 8 operating system will restrict web access to Microsoft's Internet Explorer alone.

Snare, however, is more interested in talking about collaboration than competition, and highlights the issues of data security and child safety online as key areas for all industry stakeholders.

'We are all competitors, but for the general good of UK citizens and for the growth of our digital Britain, everyone has to take part to make a difference,' she says.

One of the things Snare is passionate about is the idea that Microsoft provides consumers with the tools to manage their own data online.

'Microsoft doesn't assume you won't mind if we track what you are doing,' she says, but dodges suggestions that this comment is directed at Facebook or Google, both of which have come under fire for their handling of consumers' data. The inference is easy to draw, however.

Citizenship is high on the agenda for Snare, who says that it is part of every Microsoft employee's brief to build it into their day-to-day work, as well as participate in volunteering. While Microsoft may be a US business, she says it 'cares and invests a huge amount of time, energy, expertise and resource' in every market in which it operates.

Snare claims much of this goes unnoticed, at least partly because of the UK business' own reticence. 'I don't know whether it's a British thing, but it's not natural for us to talk about all the great things we do.'

This includes project work for underprivileged children, schools, tech start-ups and the government. Most recently, Snare has been participating in a project aimed at getting people back into work, by helping them assess their skills, develop new ones and access mentors to make them employable in the digital world.

This less-public side of Microsoft appears to be what has kept Snare there for so long, as she describes herself as an 'ethical person'. Initially she wanted to be a journalist, but was dissuaded by her university tutor, who said she was 'not cut-throat enough' and better suited to marketing. Working in a competitive industry does not faze her, however.

In a rapidly changing environment, Microsoft faces significant challenges. However, Snare's deep-rooted positivity, allied with her broad understanding of the industry and the company, makes her seem the right person to keep morale up.

Despite her length of service, Snare shrugs off any suggestion that this is a long time for someone in the digital industry – or that she is by any means a 'Microsoft lifer'.

'I'll move on when I feel the time is right. Like a relationship, there has to be a balance between what I'm giving and getting, and if I'm not learning and stretching [myself], I'll find somewhere else to play.' 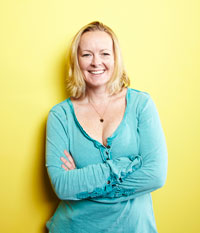 Hobbies Horse-riding, scuba diving and polo. 'I have a horse called Marmite who teaches me a lot.'

Favourite ad The Berocca Boost ad with the donkey.

Favourite media Capital Radio and news feeds. 'News is in real-time, and important news finds you.'

Microsoft launched its biggest campaign to date for its browser Internet Explorer 9 in April, to showcase 'the beauty of the web'. The push, which was created in-house, focused on what the browser can help users do.

$3.4bn - Microsoft's global spend on marketing and sales for the quarter ending 31 March

$5.1bn - Its profit for the same quarter

Nissan and Sony among launch advertisers for Microsoft's 'all new' MSN

Microsoft board 'does not care' about number of Facebook likes