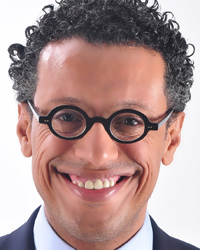 The Middle East is full of potential in terms of creativity, but hampered by a lack of opportunity for creative work that is free from traditions and other barriers. The political and social climate puts pressure on creativity to work within certain frameworks; this reduces the opportunity for showcasing potential. There is a depressing consequence, which is that, in most cases, creative people prefer to migrate to markets offering greater opportunities, such as Europe and the US.

However, consumers generally respond quickly to what is new and different. The problem is that, because most campaigns are very similar, consumers have limited brand desire.

For example, most TV commercials in the Gulf states show a family, always including a husband, wife and two or three children – this demographic typically features for most brands. The inevitable consequence of this is that the new generation of today’s youth in the Middle East ignores TV ads, simply because they fail to deliver any emotional pull for this demographic.

These days the most creative work comes from entrepreneurs or start-ups. For example, in Saudi Arabia there is a creative hub called The Loft Me, started by three women. They recognised that there is an audience for tradition-free, creative work that will appeal to entrepreneurs like themselves, and tap into consumers looking for innovative work. Their unique positioning has given them much exposure, as has the amazing work they have produced.

In terms of consumer influence, however, the family demographic remains most prevalent. Influential purchasing groups in the Gulf states are husband and wife with two kids, up to bigger families, usually self-employed with large businesses. The sectors most active in targeting these groups are banks, real estate and fashion, and all are very aggressive in capturing the Gulf market. However, many of these are from overseas, rather than domestic players, such as UBS in Switzerland, real estate in London, the South of France and Dubai, and fashion from Italy and France. 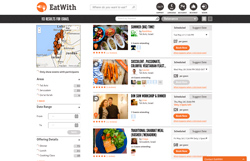 EatWith enables travellers to share a meal with locals

Launched in Tel Aviv in May 2013, EatWith is a site that connects travellers with locals to share a meal in a host’s home. Hosts can set the price they would like to charge per meal, and EatWith charges a 15% fee. All payments are handled via EatWith’s website, and both hosts and guests are covered by the
company’s insurance policy. 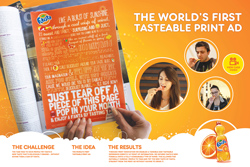 In the first quarter of 2013, Fanta relaunched in the Middle East with an edible ad that was printed on rice paper and infused with Fanta flavouring. The full-page ad appeared in local magazines and publications during the campaign. Fanta also installed sensor-equipped retail displays that emitted the aroma of the beverage, and launched a Facebook app that encouraged fans to record "slurping" soundbites.

In August 2013, the Bedivere Eatery & Tavern in Hamra, Beirut, offered a 10% discount to customers willing to leave their mobile phones "in custody" for the duration of their meal. The promotion was designed to encourage diners to interact with others in the restaurant, and the discount was forfeited if diners attempted to retrieve their mobile phone before completing their meal.

Sainsbury's accused of anti-Semitism over removal of kosher products

Australian creativity at its best is straight-talking, no-nonsense and unashamedly populist