But which is true? For our report into millennials, I used the YouGov Profiles tool to see whether today’s under-35s are special. Profiles is essentially YouGov’s data vault and lets us see inside the minds of 250,000 people and provides around 120,000 variables on their habits, beliefs, and opinions. Brands and agencies use it to plan their campaigns as they can see in granular detail the audiences they should be going for.

Broadly speaking there are three general things about today’s 18-to 34-year-olds: there are things that make millennials unique; they are as you would expect young people to be; and they are not a homogenous mass.

The under-35s love of technology is well-known. They are a distinctive group because they are the first generation to grow up online and, unsurprisingly, the data shows that almost all of them use the internet as their main source of information, something that notably lessens with age.

Similarly they dominate social media use with almost two thirds (72%) using it.

There are three general things about18-to 34-year-olds: there are things that make millennials unique; they are as you would expect young people to be; and they are not a homogenous mass.

This also means they engage with things in a different way to other generations. Profiles finds that due to the way they receive and filter news, a large number are concerned that they are missing out on stories. This is something that older generations are less worried about.

For organisations looking to reach young people through news – from consumer brands to charity appeals – this matters. 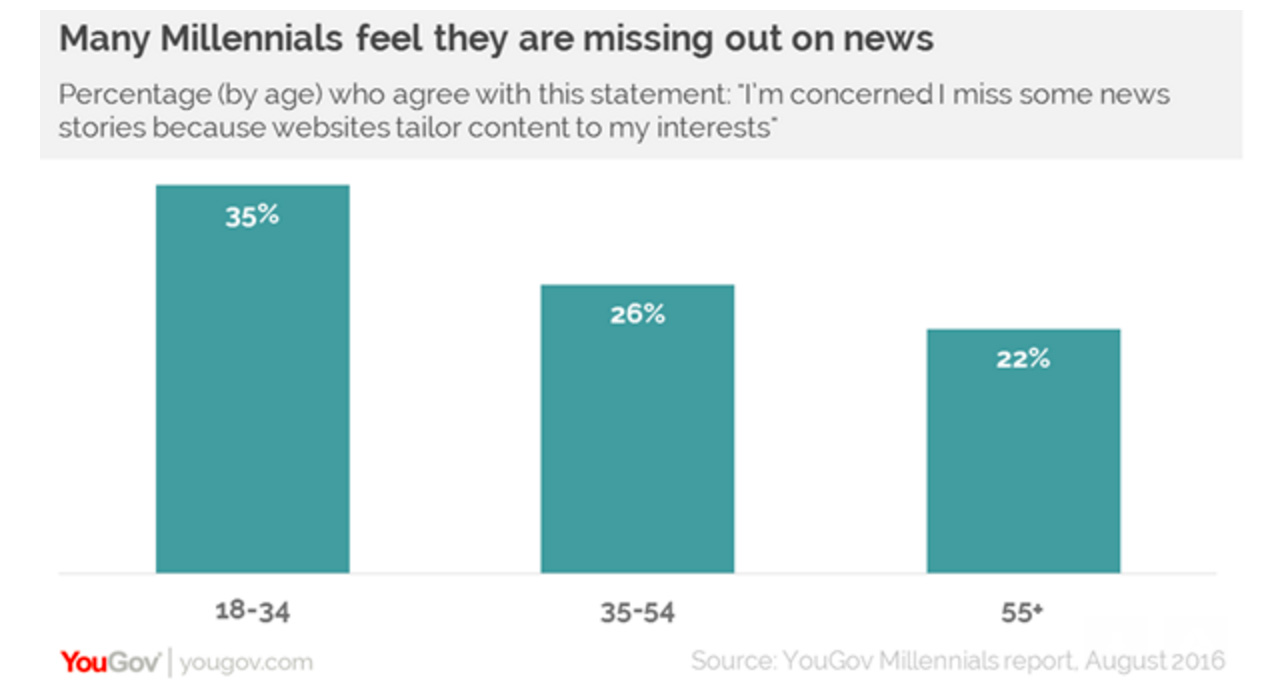 But, the world has also changed in other fundamental ways meaning today’s young people are distinct from their parents’ generation.

A good example of this is coffee brands. Millennials avoid brands such as Nescafe and Kenco because they instead get their caffeine fix when they are out and about from the likes of Starbucks and Café Nero. So, while the Gold Blend couple were right for the 80s and 90s, today they would just look passé.

But this is not just because they don’t tend to drink Nescafe. Having a couple at the centre of an advert also may not ring true with them. Four in ten (39%) under-35s believe the idea of the "nuclear family" is outdated. This is compared to 33% of 35- to 54-year-olds and 24% of the over-55s.

Despite these notable ways they are different to previous generations, our data shows that much of how 18- to 34-year-olds think and act is just young people being young and very much what you would expect.

Out of the more than 2,000 attitudes tracked by Profiles, "having trouble getting out of bed" is in the top ten for millennials along with video games and sex/relationships. Furthermore, it is also not a shock to see more of them preferring to buy from companies they think behave well than is the case with older consumers.

The way they approach life is also shaped – as with previous generations – by the fact they are just starting out. Millennials place a much heavier emphasis on getting on the career ladder and doing what is necessary to achieve it.

Our attitudinal data shows that millennials are willing to sacrifice their free time to get ahead in their careers and are also more motivated by career progression than by money.

More 18- to 34-year-olds prefer to buy from companies they think behave well than is the case with older consumers.

Allied to this, Profiles shows they are by far the most likely age group to describe themselves as being "ruthless" in getting what they want. This is because by the time people reach their mid-30s they are either already getting to where they want to be or have revised their expectations about what they want and expect out of life. 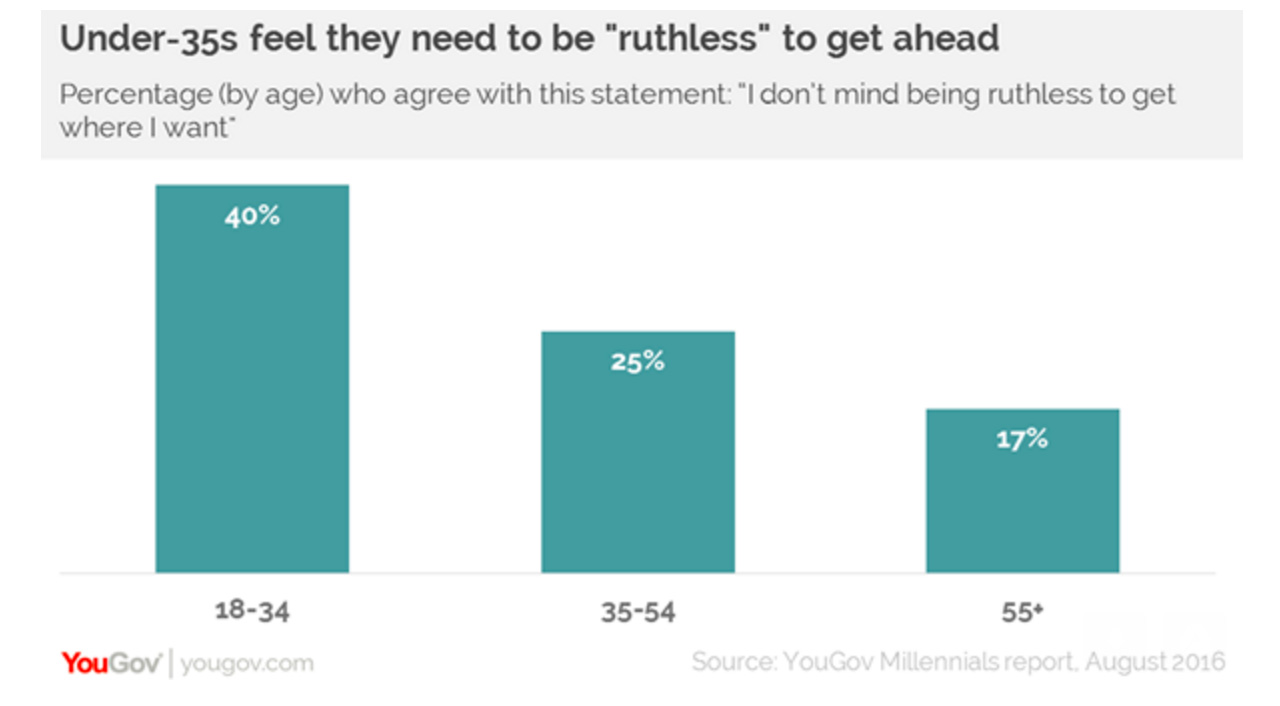 When it comes to eating, the data is clear they favour ease and it’s all about convenience. As a result, Profiles shows that 18- to 34-year-olds want food on the go from brands such as Dominos, Just Eat or McDonalds.

Allied to this, they don’t do big shops (or even visit supermarkets that much) and so don’t really have too much to do with the likes of Aldi or Lidl, neither of which have "local" or "express" stores that are easier to pop in to.

The fault lines within millennials

The data shows clearly that there are as many differences within millennials as there are between them and other age groups. They are not one single entity with clear differences that shaped solely by age. So, while over a third of 18 to 24s think paying for internet access is "outdated" only a fifth of 25- to 34-year-olds agree.

Similarly, double the number of under-25s think that national borders are "outdated" compared to 25- to 34-year-olds – an insight into why so many of them voted "Remain" in the EU referendum. 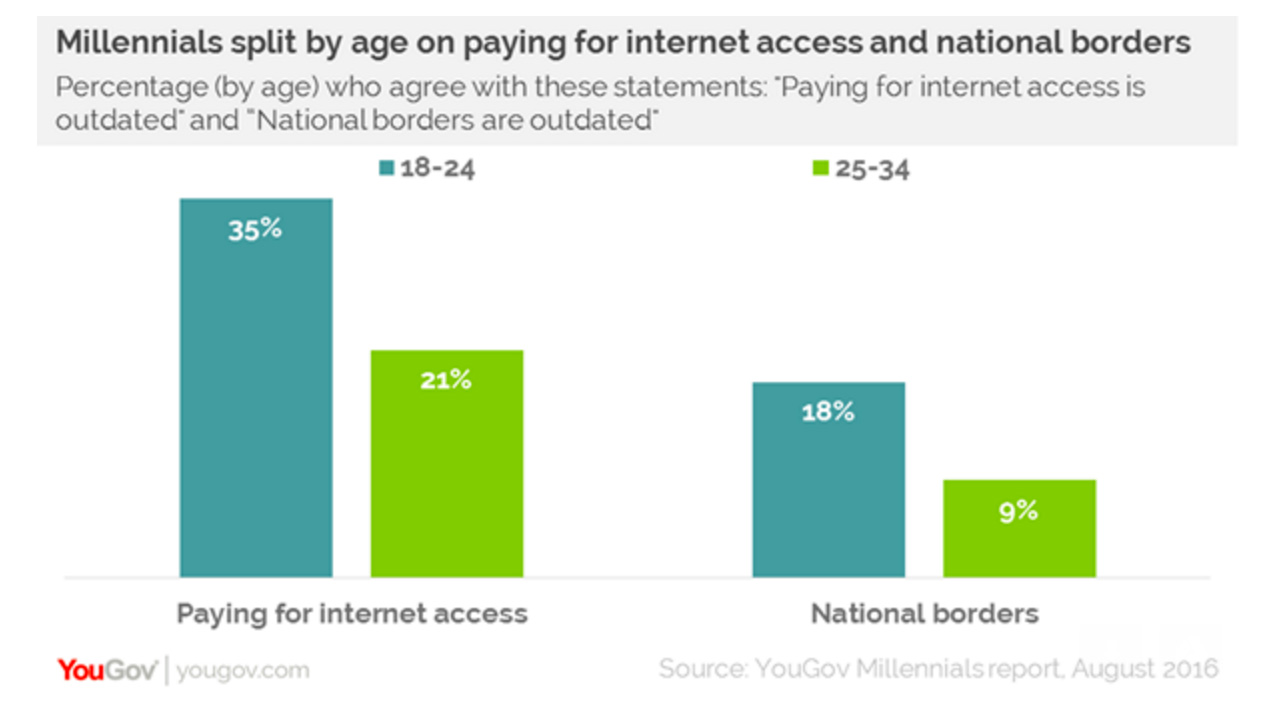 Another notable fault line – and one that will last well beyond their 35th birthdays – is education level. The data shows just how different millennials who left school by the age of 18 are to those who have experienced higher education.

One area is particularly interesting for marketers. Profiles shows that while graduates are less likely to give adverts the time of day, school leavers are more likely to use advertising to help them work out what they want to buy.

The data on Profiles makes it clear that Millennials are both different and not different to previous generations. The reason there is so much debate about the issue is because both sides are right. In terms of reaching them, they are a distinct group. But in terms of much of their day to day lives, they are what you would expect from young people – in this or previous generations. 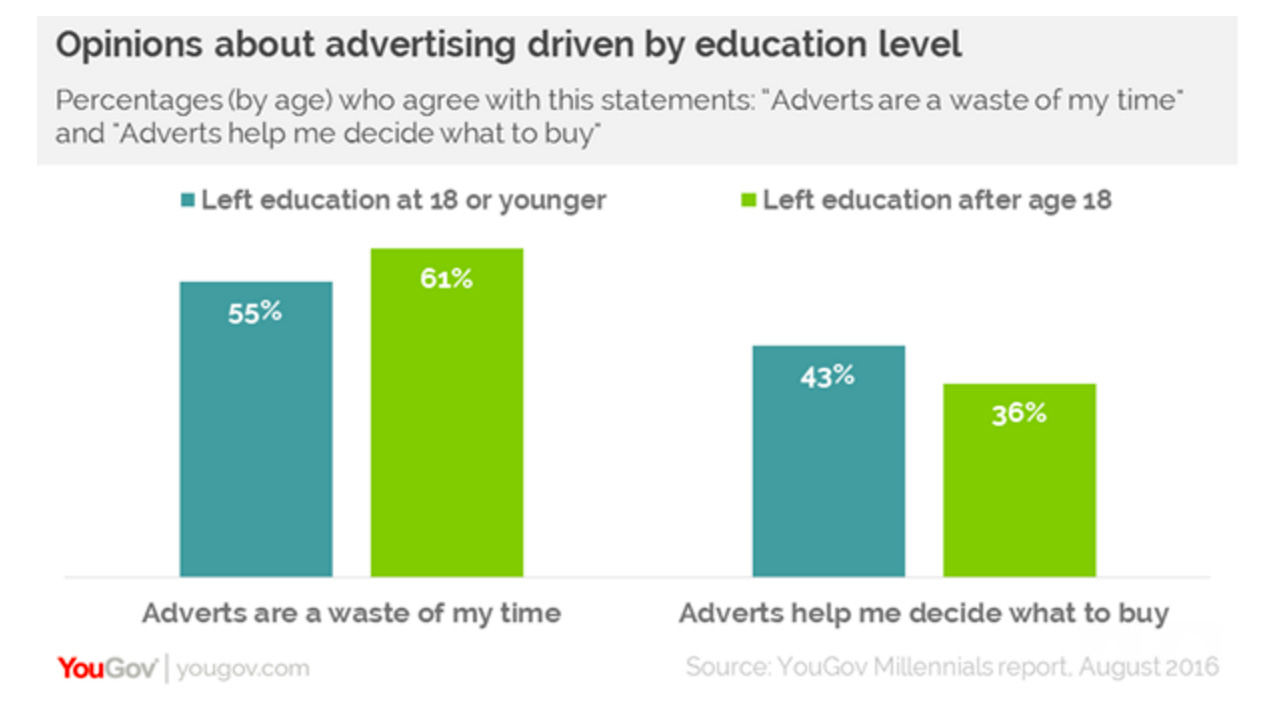 Marketers should beware, though, that either way they are not a homogenous lump and can’t be looked on as a bloc of people who act, think and feel the same. They engage with adverts and technology as individuals. The technology that has united them also shows us how different they all are.

Watch: How do today's creative students consume media and ads?

MailOnline and Metro's nine rules for advertisers to reach millennials

Tom Knox: Why conscious capitalism matters to the ad industry