Women are becoming ever-more disengaged from the often hyper-masculine Punch and Judy performance of British party politics. What does this mean for brands, asks Nicola Kemp.

Women fought and died to be given the vote; yet, at the 2010 general election, 9.1m women did not exercise this hard-won right. Make no mistake: British politicians have system-atically failed to engage with women. In fact, according to research from Cosmopolitan magazine, millennial women are so uninspired by British politics they would rather vote for politicians who are dead than the main parties’ current leaders. 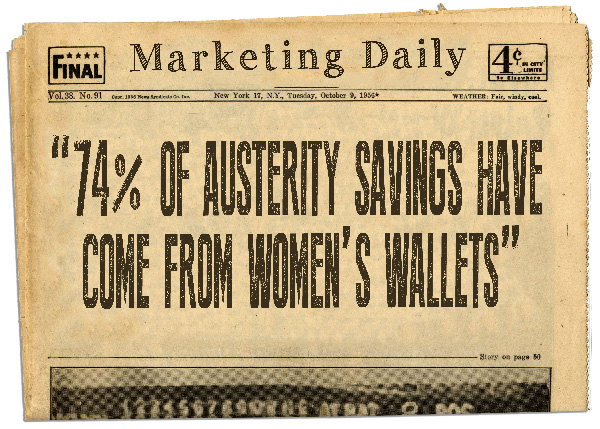 Clearly, political groups across the board face a fundamental problem marketing to women. Not least because it is women who have borne the brunt of the coalition government’s austerity drive. Equality-campaigning organisation The Fawcett Society reports that 74% of austerity savings have come from women’s wallets, while the gender pay gap has increased for the first time in five years.

Philippa Roberts, founder of strategic consultancy Pretty Little Head, believes that the decline in women voting coincides with the end of ‘conviction politics’. "The war in Iraq and the ‘dodgy dossiers’ marked a real watershed. The trust has gone out of politics."

According to Roberts, when it comes to choosing both brands and political allegiances, women respond to the idea of conviction. It follows that the more businesses and politicians become removed from belief and conviction, the harder it will be for them to connect with women. "Everything has become very tit-for-tat, with important issues such as education and the NHS reduced to political footballs. As a result there is very little for women to engage with."

Indeed, several research projects suggest British politicians’ problems reaching women go far beyond the realms of marketing. Justine Roberts, chief executive of parents’ website Mumsnet, believes there’s a fairly strong feeling that none of the major parties is offering a gripping version of what it can do for the country. A joint report by Mumsnet and Ipsos Mori, published last autumn, suggested that levels of satisfaction with all the main party leaders were at an historic low, and a poll of Mumsnet users canvassing views on political culture in Westminster found that, broadly speaking, they thought Parliament was "ruthless, connected, rich and male".

"Women aren’t, in the main, seeing themselves represented by the politicians who want their votes, and it’s problem-atic that Westminster politics often consists of affluent, white, middle-aged men throwing playground insults at each other," she adds.

Of course, wanting something to vote for is not solely a female preserve; the number of men voting is also in decline. However, while research by the House of Commons Library found that in 2010 8m men did not vote, this is still more than 1m fewer than the number of women who chose not to. This ‘turnout gap’ between the sexes is growing. According to the research, the number of women not voting had risen by 79% since 1992.

Labour’s deputy leader, Harriet Harman, who commissioned the research, told The Independent: "It is the women who did not vote last time who hold the balance of power." She went on to disclose that these "missing millions" of women will be the focus of Labour’s campaign and promised that "this election will be a watershed for women in this country".

However, Sophie Maunder-Allan, chief executive of direct agency VCCPme, thinks it is patronising to call these women "missing". She explains: "We haven’t run away from our lives or responsibilities, nor are we wandering around lost and confused.

In fact, doesn’t chasing these apparently wayward extra 1.1m women [from the ‘turnout gap’] rather miss the much more important fact that there’s a whopping 17m women and men who are ‘missing’?" According to Maunder-Allan, this disenfranchisement is down to fact that no one has earned their votes. She adds: "I’d argue it’s the politicians who have gone AWOL."

Women are not a niche group of homogenous views, yet marketing from the major political parties suggests they continue to be viewed as such. Labour’s bid to connect with the disenfranchised women of the UK recently kicked off with the unveiling of its much-derided ‘Woman to Woman’ pink minibus. It will travel the breadth of the UK, visiting 70 constituencies to enable campaigners to talk to women who did not vote in 2010 – and allow marketing professionals to look on in astonishment at the parties’ continued ability to patronise those they need to woo.

Meanwhile, the Conservatives are shooting out press releases inviting journalists to join Chancellor George Osborne to "see the role that women are playing in the economy". When the marketing is so heavy-handed, the issues behind the inevitably derisive headlines won’t even see the light of day.

Trish Halpin, editor of Marie Claire magazine, says one of the problems with the pink bus is that it highlights why women feel they are important to politicians only when there is an election. "The danger is women feel they are wooed for the duration of the election and then forgotten about," she warns. "People are so sophisticated and have so much access to information you can’t afford to rely on tokenism."

The shortcomings of tokenism were brought under the spotlight last year by the Better Together campaign, which made ‘The woman who made up her mind’ – an ad in support of the ‘No’ vote in the Scottish independence referendum. According to Gillian McCormack, managing director of creative communications agency Material, this representation of a Scottish woman, who didn’t know the First Minister’s name or want to engage in "politics-chat", was, in effect, a laughable parody – a horribly misguided attempt to appeal to undecided female voters.

McCormack says the resulting backlash highlights "what can happen when politicians get engagement wrong and treat women like a homogenous group waiting to have their mind made up for them". She adds: "How can we expect politicians and the wider political system to understand what women want when they don’t understand how women live? They don’t understand that there are different groups and individual needs, and when the opportunity arises to find out more, they appear not to listen."

A default position of ‘delete’

The dismal state of political marketing makes it easy for disenfranchised voters to simply dismiss politics and politicians as a waste of time. Ella Dolphin, group commercial director at publisher Hearst Magazines UK, says that in the always-on, digitally driven society, time-pressed women are receiving so many messages that their default is to delete. "What has made women so stressed is attempting to achieve work-life balance, which has placed a greater focus on what is necessary and what is entertainment. The trouble is women’s politics falls between the two."

The stakes of the forthcoming election may well be high and, privately, campaigning groups express frustration at being unable to galvanise great swathes of the population. But there are limits to the time and headspace consumers are willing to invest in any given political party, particularly in an era where it is becoming more difficult to decipher what they actually stand for.

Sarah Baumann, managing director of integrated agency Atelier and chair of VivaWomen! UK, Publicis Groupe’s women’s network, says: "Women, especially mothers, just have too much on their plate to engage unless there’s something really relevant to engage in. If you have less than 30 minutes a day to spare, the chances are you need to spend it on something that keeps you sane and happy, not listening to the same old rhetoric that shows there is minimal understanding of your needs and role in life."

The failure of the UK’s biggest political parties to galvanise female voters is particularly jarring in the face of the resurgence of feminism as a marketing tool. From Always’ genre-defining Like a girl campaign to Sport England’s rousing ‘"This girl can" activity, feminism is in the midst of a marketing resurgence. At the same time, corporate feminism has risen up the business agenda. Despite the fact that the gender-pay gap is increasing and mothers are leaving the workforce in droves, it seems that no conference is complete without an all-female panel debating women on boards, or the lack thereof. Yet, when so many women are struggling to have anything, the debate on ‘having it all’ can quickly move from being empowering to making women feel more isolated.

"The reality of daily life for women in Britain is underestimated by brands and politicians," argues Pretty Little Head’s Roberts. "Two-thirds of low-paid workers are women, three-quarters of carers are women and two-thirds of the public sector workforce are women. Where austerity measures have hit, it is women who are either on the receiving ends of these cuts, or the ones left filling the gap. None of these things is recognised by brands or politicians."

Of course, all too many brands are guilty of relying on the heart-sinking cliché of the time-poor, hard-pressed, multi-tasking mother. Nonetheless, the reality of simultaneously caring for young children and ageing parents is having a dramatic impact on how many women view the political landscape.

Halpin says there is a dire need to tackle their concerns. "It is fundamental to address the issue of childcare, when women are seen as responsible for it, and the financial challenges that come with it are having a huge impact on women’s lives."

Some believe the tendency of politicians to badge education or childcare as "women-friendly" issues underlines the inherent sexism of the political system. "Why are these ‘women-friendly’ policies?" asks Baumann. "As many fathers as mothers are preoccupied with the quality and availability of local schools, and since when did affordability of trustworthy childcare only affect the mother?"

In an era of coalition governments, pink vans, trial by Twitter and mixed messages, it is becoming more difficult for disengaged voters to differentiate between the main political parties. Many believe this lack of clarity is driving women’s political disenfranchisement.

Ogilvy & Mather London chief executive Cheryl Giovannoni urges politicians to adhere to the basics of brand management.
"Successful brands have a clearly differentiated and distinctive positioning that resonates, inspires and creates a following. They also know that strong brands understand what their customers want."

However, Baumann believes there is something far more fundamental at the heart of the problem.

"Politics has become so far removed from real people, so insular, so point-scoring, so self-referential that consumers have become a mere accessory rather than the reason for politicians and political parties to exist," she explains. "Politicians have forgotten the ‘target’ in audience and are treating us like we are merely there to applaud or boo their drama."

We are all too guilty of overestimating the importance of our businesses and brands on our consumers’ lives. Yet, when so much is at stake, the failure of the UK politicians to connect with great swathes of the electorate goes beyond the realms of the typical marketing meltdown.

Rachel Barnes: the time is now to celebrate digital mavericks

P&G's Roisin Donnelly: 'I haven't had a breakfast meeting in 15 years'

Why marketing to mums is broken

Wellness, co-shopping and emotion: the day one trends from marketing to women event

SXSW: there is no such thing as ethics in analytics

#VoteSelfish aims at apathetic youth ahead of General Election

Five ads that get us emotional about motherhood