The bristling excitement among the young masses milling into an East London church as dusk fell was palpable - it had all the hallmarks of a cult, but was in fact a clarion call for advertisers.

Vice’s pitch to adland last Friday in St Luke’s Church offered a revealing glimpse into one of the most dynamic media companies in the world right now.

For those still getting up to speed, Vice is the one-time offbeat lifestyle magazine turned multimedia counterculture behemoth that has struck a strong chord with Generation Y Not.

The star turn was the co-founder and chief executive, Shane Smith, who – at 44 years old, bearded and in tight black shirt and jeans – looked more AC/DC fan than Steve Jobs. During a profanity-riddled, louche address, I found my cynicism ebb away as Smith, right on-brand, kept it clear and simple.

There was no attempt to dress up the move into video – it was born out of a desire to gain a larger share of advertising. Video represents about 70 per cent of revenue, mainly from licensing but also via sponsorships.

Not that money is an immediate concern. Last month, Vice landed $250 million of investment from Technology Crossover Ventures and the same amount from A&E Networks. They join the existing investors 21st Century Fox, WPP and Tom Freston, although Vice is quick to highlight that Smith retains majority control.

Assuring the room that there was "a method to our madness", Smith said the A&E deal will enable expansion in the programmatic and linear TV space, while the partnership with TCV "allows us to go towards our first priority, which is mobile".

The immediate focus for the future is Vice News, which claims to be the world’s fastest-growing news channel. Its immersive, global perspective from reporters on the ground talking in a language they understand has attracted more than one million YouTube subscribers and 150 million video views since launching in March.

Smith says Vice’s success is proof that "the world is fucked": "if everyone was doing their job in the Fourth Estate, then we wouldn’t be doing news".

What we found is you have the right over here which has become op-ed [opinion editorial], talk radio, hate radio, you have the liberal left over here, which essentially has become comedy – pointing fingers at the op-ed on the right. No one’s actually going, pressing record, and telling the fucking story."

The result to-date has been some agenda-setting reports ranging from the conflict in the Ukraine to Africa's fight against Ebola. But the footage that really put Vice News on the global map was undoubtedly the chilling video capturing the rise of the Islamic State in Iraq. It remains the only news organisation to gain first-hand access to this hard-line Sunni jihadist group.

Going forward, Smith says the mission statement is "to be less shitty than everyone else". Which, as elevator pitches go, is fairly compelling. And if last Friday is anything to go by, he is not short of believers. 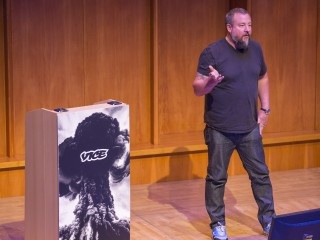 Vice News teams up with Skype