Keeping it real paid dividends for the National Lottery, winner of this month’s Thinkboxes Award for TV ad creativity for its Lotto commercial ‘Calm before the storm’ – part of its ‘Amazing starts here’ campaign, created by Adam & Eve/DDB.

"National Lottery Games are played by almost 60% of the UK adult population, so TV is key to reaching our audience with brand messages and game news. It’s still a key way to reach a lot of people quickly," says Hayley Stringfellow, head of brand strategy and marketing at the lottery’s operator, Camelot.

"We expect to be entertained when we watch TV – whether it’s the programme or the ads. So it forces us to really deliver something interesting for the watcher. When our TV ads are truly entertaining, people do feel differently about our brand."

Work began on the winning ad back in March, when the agency was briefed to come up with an idea that would let the audience know that every day, people are having their lives changed by the National Lottery.

"Keep working on the script, the staging, art direction and dialogue.There's always a chance to make something better"Brad Woolf, art director, Adam&Eve/DBB

Anticipation and excitement
The creative team was informed by research highlighting that one of the most rewarding aspects of playing is the excitement generated among players by the anticipation of winning.

"The most compelling thing for us was realising that there is a contact centre full of people dedicated to answering calls from winners," says Brad Woolf, art director. "It really gives some perspective to the number of people who are winning life-changing sums of money through the National Lottery."

Woolf’s creative partner, copywriter Dan Bailey, adds: "We had several scripts on the table throughout the creative development process but the one that became the final fi lm was always felt to be the strongest, simplest answer to the brief.

"It was the one that was more ‘show’ than ‘tell’." The idea was to show one of the call-centre workers telling a player they had won. Further development of the idea was then shaped by the creative team visiting the contact centre, meeting staff and listening in to winners’ calls.

"We had a good idea about who we wanted to feature fairly early on," says Bailey. "And we knew that using a real call would give us the kind of visceral reaction that would be hard to recreate with an actor." 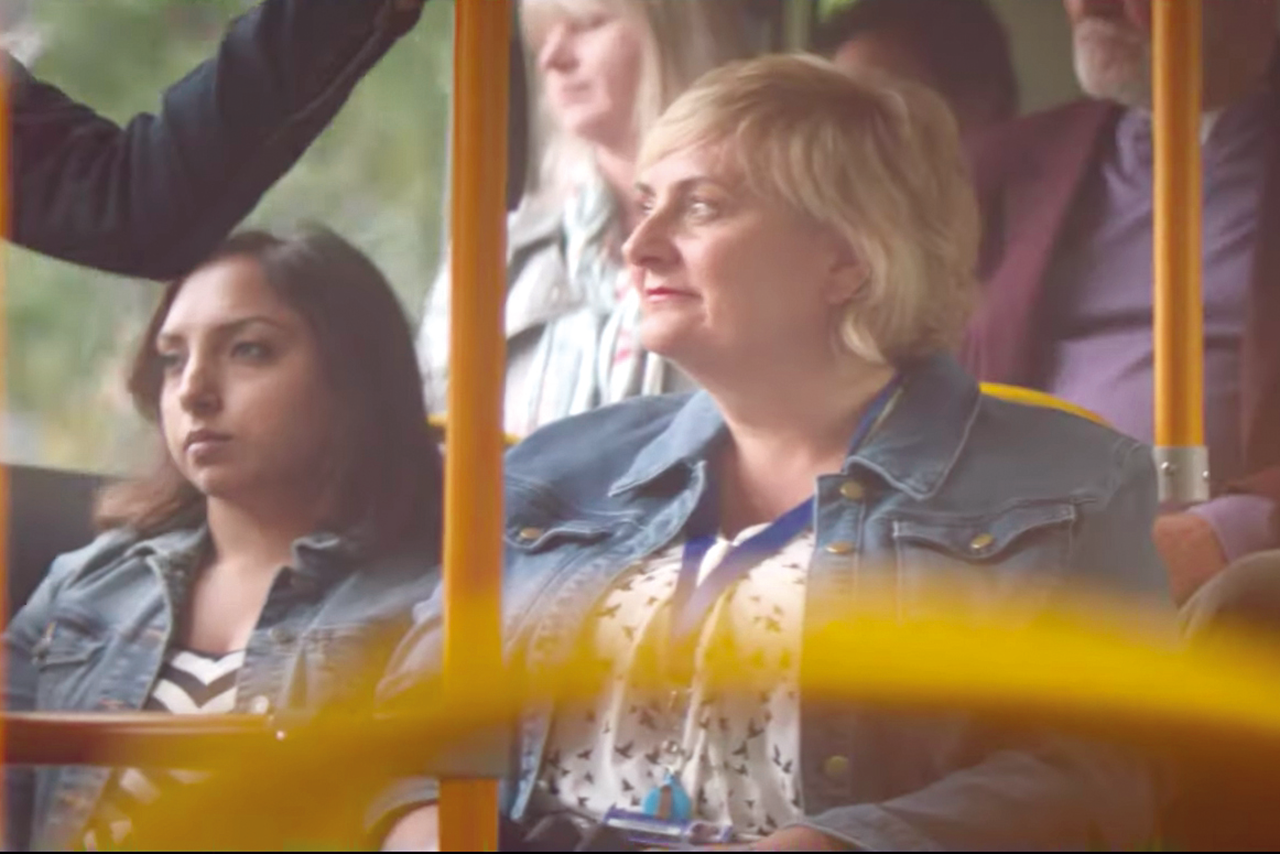 Director Henry-Alex Rubin visited the contact centre, too. "We’d worked with Henry before and knew his attention to detail, collaborative style and storytelling would make him a great match for this spot," adds Woolf. "His choice of ‘Michelle’ as our lead character and his ideas for dramatising what happens in such an everyday environment sealed the deal."

The shoot took place not at the real call centre but in one specially created elsewhere, with care taken to make every detail true to life.

The biggest challenge, however, was to make the non-actors who were involved – actual call-centre staff – feel comfortable on camera. "That was where Henry came into his own, putting everyone completely at ease so that they were able to be themselves," Bailey notes.

The film had a good shape from early on in the development process, so the biggest decision in the edit was how surreal and dramatic to make the change in tone in the seconds before the lottery draw is made.

Focus on authenticity
Woolf explains: "We wanted to capture that heightened sense of anticipation the staff have, but were wary of jeopardising the authenticity of the film, which was absolutely paramount." Camelot’s Stringfellow says all involved were thrilled with the result, which she describes as "a new way in" with a powerful emotional draw. "Michelle is a star! Her natural positivity and energy make the ad, and really draws you into the story," she enthuses.

"The key challenge was making sure that we didn’t compromise authenticity by dramatising our people and winners’ real experience. We didn’t want to get Michelle or the team to act or do or say something they wouldn’t naturally do. This was critical to not falling into the trap of creating an ‘ad-y’ ad," Stringfellow adds.

"We used a real winners’ call. We used our staff for the key roles and the production team was amazing with them. I’m proud we didn’t fake it."

‘Hindsight’ for Taylors of Harrogate, by Lucky Generals, and ‘Be Unlimited’ for Vodafone, by Ogilvy UK, placed second and third, respectively, in the latest Thinkboxes winners’ line-up.

"A simple narrative leaves room for emotional impact, humour, or whatever else it needs to connect with viewers"

‘Differences’ (Adam & Eve/DDB for McCain)
‘Negotiation’ (Leo Burnett London for McDonald’s)
‘Why didn’t we think of them before?’(Hindsight) (Lucky Generals for Taylors of Harrogate)
‘Be Unlimited’ (Ogilvy UK for Vodafone)