All the big issues in adland this month...

There’s a certain poignancy in the departure of Lord [Maurice] Saatchi from the advertising industry – in which he has played such a pivotal role – and not just because of the manner of his leaving.

Having previously worked at Haymarket (publisher of this magazine), his 1970 launch of Saatchi & Saatchi was emblematic of the ascendancy of British advertising. Indeed, in an unprecedented move, Campaign altered its press day to break the story.

The agency’s subsequent international expansion, driven by demand for the quality of ads such as "Manhattan" for British Airways and "Slashed purple" for Silk Cut, also put the UK firmly on the global stage, where it remains. The globalisation of advertising, the centralisation of media and the development of an integrated offering were all mini-revolutions that Saatchi & Saatchi pioneered.

While this year is the 50th anniversary of the launch of their totemic agency, it also marks the 25th of M&C Saatchi – the brothers’ response to their 1994 ousting from the agency that first bore their name. Continuing the spirit of "Nothing is impossible", M&C Saatchi went on to create a micro-network of specialist comms agencies, many of which it either acquired or partnered in launching.

How sad that this strategy, which was designed to foster the entrepreneurialism that drove the Saatchi brothers, seems, in part, to have contributed to the sticky situation in which M&C Saatchi now finds itself. And to Lord Saatchi resigning as a director amid talk of a dispute between him, the non-executive directors and Jeremy Sinclair, Bill Muirhead and David Kershaw, the co-founders with whom he had worked for so long. 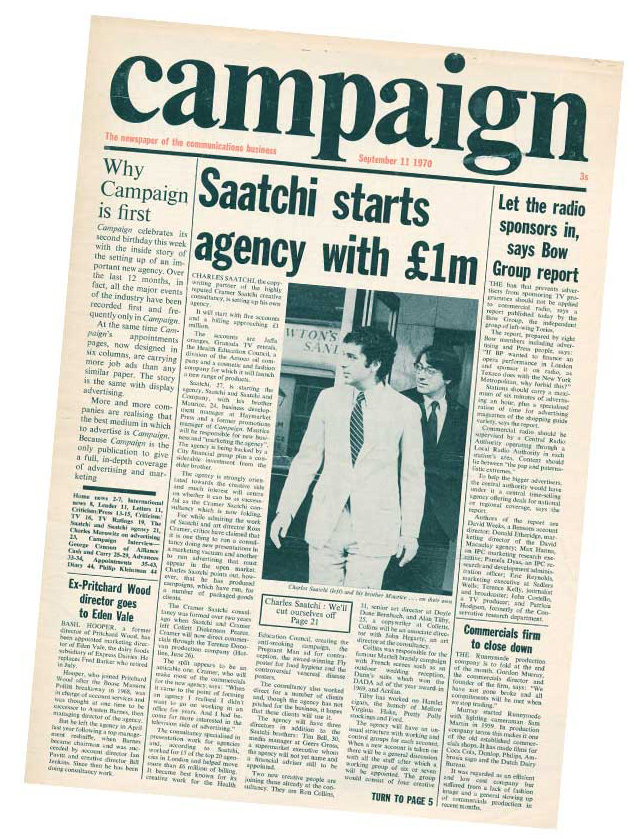 The financial irregularities are not believed to be fraudulent and are restricted to a handful of M&C Saatchi group companies, but the scale of them has caused disquiet in the City and the group’s share price has tumbled. The departure of Lord Saatchi (his brother Charles stepped back years ago) is truly the end of an era that coincides with the end of a decade.

Quite whether M&C Saatchi can navigate itself out of this mess will come down to how the remaining board and the, as yet unappointed, non-execs manage the fallout. With the share price depressed and with many of the group’s top talent paid for by staggered share-based payments, there is the danger that key staff could also quit. Reassuring them and the remaining clients will be a major test of the account-handling skills for which M&C Saatchi was well known. A brutally simple thought.

Sadly all of this is too late for staff at the group’s advertising agency, M&C Saatchi London, for whom voluntary redundancy was offered in the run-up to Christmas after it lost its 20-year place as NatWest’s agency of record to The & Partnership London (a decision unrelated to the financial irregularities). The account is estimated to make up more than 10% of the agency’s billings and a similar percentage of its 178-strong workforce is believed to be affected by the move.

These staff – many of whom will be early in their careers and without the substantial assets, including 4.5% of M&C Saatchi stock, that the 73-year-old Lord Saatchi has built up over the years – represent the collateral damage when a client of this scale decides it wants a new approach. Hopefully they will not be on the market for long if The & Partnership snaps up the brightest and the best.

M&C Saatchi has understandably tried to play down the scale of the financial problems (they are limited to just a few of the 140-odd entities that make up the global group) and its worldwide chief executive, Moray MacLennan, has attempted to rally staff, pointing out that the underlying business is "sound" and that the agency will "emerge stronger" from the drama. However, the days of advertising agencies being run by a small cabal of like-minded individuals (such as Saatchi, Sinclair, Muirhead, Kershaw and the non-execs Michael Dobbs, Sir Michael Peat and Lorna Tilbian) must surely have come to an end. The four directors are all past the age when most people take their pension, while Dobbs (a Tory peer) and Peat (former principal private secretary to the Prince of Wales) allude to a grandness of a different era.

Indeed, it was particularly odd that in its governance report, M&C Saatchi stated: "Other than walking around and talking to people, we have no formal mechanism for engagement with [our] workforce." Such a relaxed attitude probably didn’t cause the situation in which M&C Saatchi finds itself but it didn’t stop it happening, either.

If any good can come out of this sorry tale – and the departure of Saatchi – it will be that the new non-execs enforce a more progressive regime as well as tighter corporate governance.

Lida to disappear as agency merges with M&C Saatchi