While tablets already have lost the Web-browsing battle to smartphones, they have been able to maintain a hold as the media device of choice for video viewing – until now.

According to Adobe Digital Index’s "Q3 Digital Video Benchmark Report," tablet share of video starts declined 7% year over year (YoY), while smartphone share is up 33%. The smartphone has essentially replaced the tablet as the mobile video viewing device of choice, its rise aided by adoption of larger-screen smartphones. 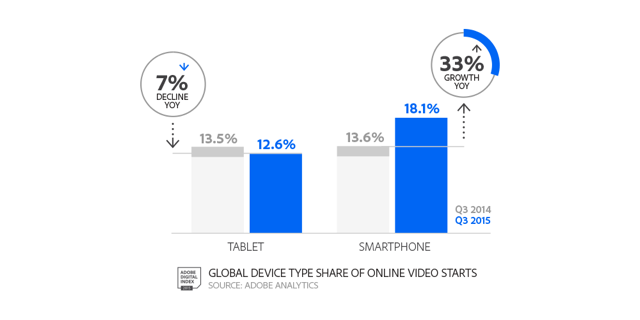 "We had already talked about tablet share declining just about everywhere else, while video viewing for media and entertainment remained the bright spot for content consumption on tablets," explains Tamara Gaffney, principal analyst at ADI. "Between connected TV devices, such as Apple TV and Roku, and then mobile devices, it looks as if video viewing will go in those two directions. Tablet consumption won’t be as important as it once was from the marketer standpoint."

According to ADI, television viewing is returning to the living room via connected TV devices. While this might sound like good news for Apple, it’s coming at a cost. Connected TV device share of TV Everywhere authentications grew 130% YoY (increasing from 10% to 23%) – and now represents nearly a quarter of all authentications. However, iOS share of viewing is down 25% YoY, from 56% share in Q3 2014 to 42% in Q3 2015.

The number of TV Everywhere streams delivered via connected TV devices grew 30%, with Apple and Roku now making up 87% of this device segment.

"Apple TV device growth is happening at the expense of the iPad and the iPhone," Gaffney says. "As a result, Apple stayed pretty level for total share, and that may or may not be good news for the company." 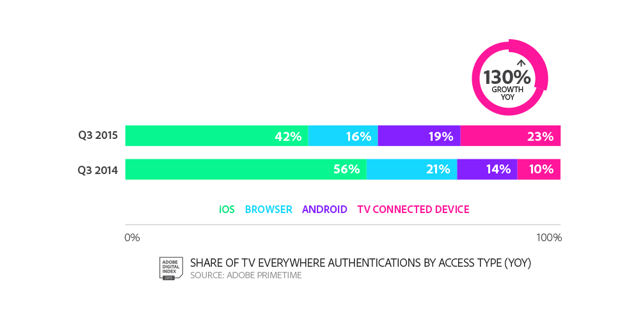 ADI looked at some of the key genres seeing significant growth in TV Everywhere. Movies, Broadcast/Cable, and Teens & Toons content grew the most. While Movies showed the highest growth (at 127%), Teens & Toons accounts for 75% of the total number of plays in Q3.

"Some of the trends we are seeing around Teens & Toons content is really interesting because these youngsters are the future of television viewing," Gaffney says. "Unsurprisingly, this particular genre is the most heavily viewed genre across all access types, and we’re finding it is consumed anywhere and everywhere via mobile."

According to Gaffney, Teens & Toons content is viewed twice as frequently on Android than on iOS devices, most likely because children own relatively inexpensive Android devices rather than pricier iPhones. "This could shape who is winning in the device area sooner than later," Gaffney says. 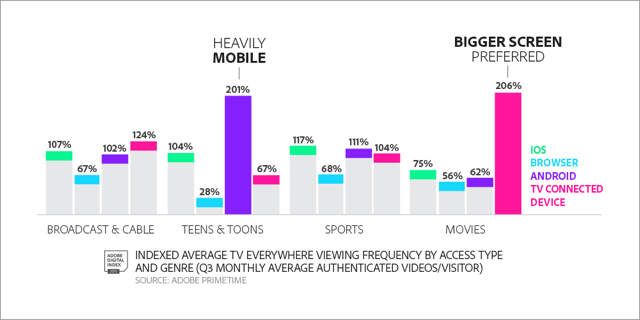 On the other hand, ADI found that when it comes to movies, viewers prefer to watch on a bigger screen, with data pointing to films being twice as likely to be viewed on a connected TV device than on any other access type. 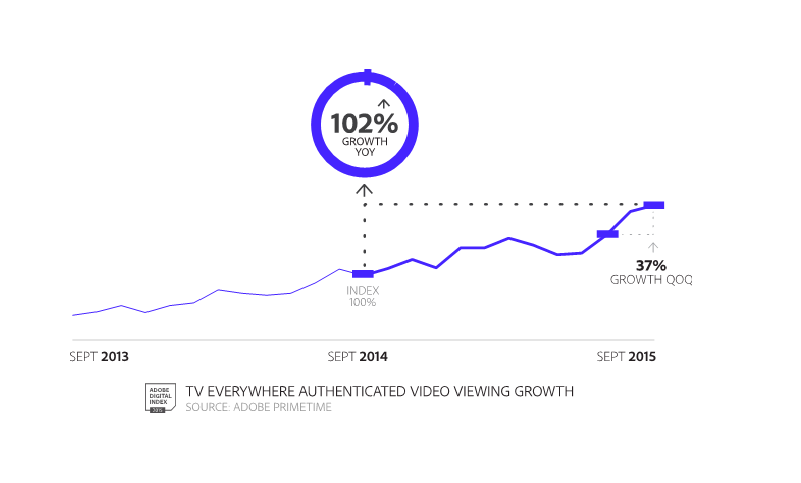 "Content consumption via TV Everywhere is seeing really healthy growth," Gaffney says. "Just look at the trend line [above]. It is partially related to a number of different content options that came online this quarter. We expect to see continued growth of TV Everywhere video viewing."