Movember wanted to increase donations and awareness, and help the public better understand its aims. Where better to take its message than Sky Sports?

Movember has firmly established itself as the month of the moustache. Few charities have managed to land such an iconic campaign, celebrated annually, with a budget of less than 0.2% of the charity sector’s annual spend.

However, in recent years, while awareness of Movember was high, understanding of the charity’s causes was low, having an impact on participation rates and donations.

By 2017, times were challenging – other charities were becoming more creative in campaigning, and different causes had started to capture the national imagination.

The Movember Foundation needed to create a deeper connection with the British public, to make it mean something more than just the moustache, and give Movember its mojo back.

Ready, steady, grow
On the advice of its agencies, Bountiful Cow and The Value Xchange, the Movember Foundation decided to partner with Sky Media and News UK to deliver both scale and relevance to its predominantly male audience. To rally mass participation and multiple platform reach, sporting talent and content were generated to create a unique partnership that really focused on the "why".

The partnership was built around three phases to deliver on their key objectives:
1.  Talk the difference. Getting men to open up and talk about the issues.
2.  See the difference. Showing men the good causes supported by the Foundation.
3.  Be the difference. Encouraging and celebrating participation and donation.

Based on the idea that, although many men fear speaking out about certain health issues, the fear of missing out was much greater – so #FOMO(VEMBER) was born. It was designed as a rallying cry for men across the UK to take part in Movember, to raise awareness of its causes and to start conversations with their friends and family.

Movember needed to mean more than just the moustache

Building Mo-mentum
With more than ten dedicated channels, Sky Sports has established itself as the home of TV sport in the UK. Engaging millions of men across multiple platforms, the Movember partnership was ideal.

Leading the way on screen, rugby and football legends and presenters Paul Merson, Max Rushden, Scott Quinnell, Sean Fitzpatrick and Alex Payne were recruited as "Mo Bros". The united approach from differently shaped balls (rugby and football) was the first of its kind. Specially created content discussing the former players’ defining sporting moments, along with pertinent male issues including Paul Merson’s struggles with mental health, were captured to create an exclusive TVC.

This candid footage created a unique TV moment that would raise awareness, highlight key campaign messages, drive fundraising, and bring home the important message that these types of issues can
affect anyone.

A special edition of The Debate Show aired on Sky Sports in which guests talked openy about mental health; a unique moment landing Movember's message in premium programming

Rocking the ‘Mo’ across screens, a unique red-button takeover was deployed, fashioning a moustache to replace the traditional on-screen button, and a "Find Out Mo" call-to-action message that directed viewers to the dedicated "Bro’s with Mo’s" VoD tile on the Sky TV homepage.

Firmly placing the content in the MO-st premium position, the VoD tile featured 24 box sets and films that showcased lead male actors with moustaches across hero content such as True Detective and Top Gun. The tile could be accessed widely via the red button, Sky Go or Sky+/Sky Q. For part of the month, it had permanent placement on the My Q and Sky Go homepage across millions of Sky households. 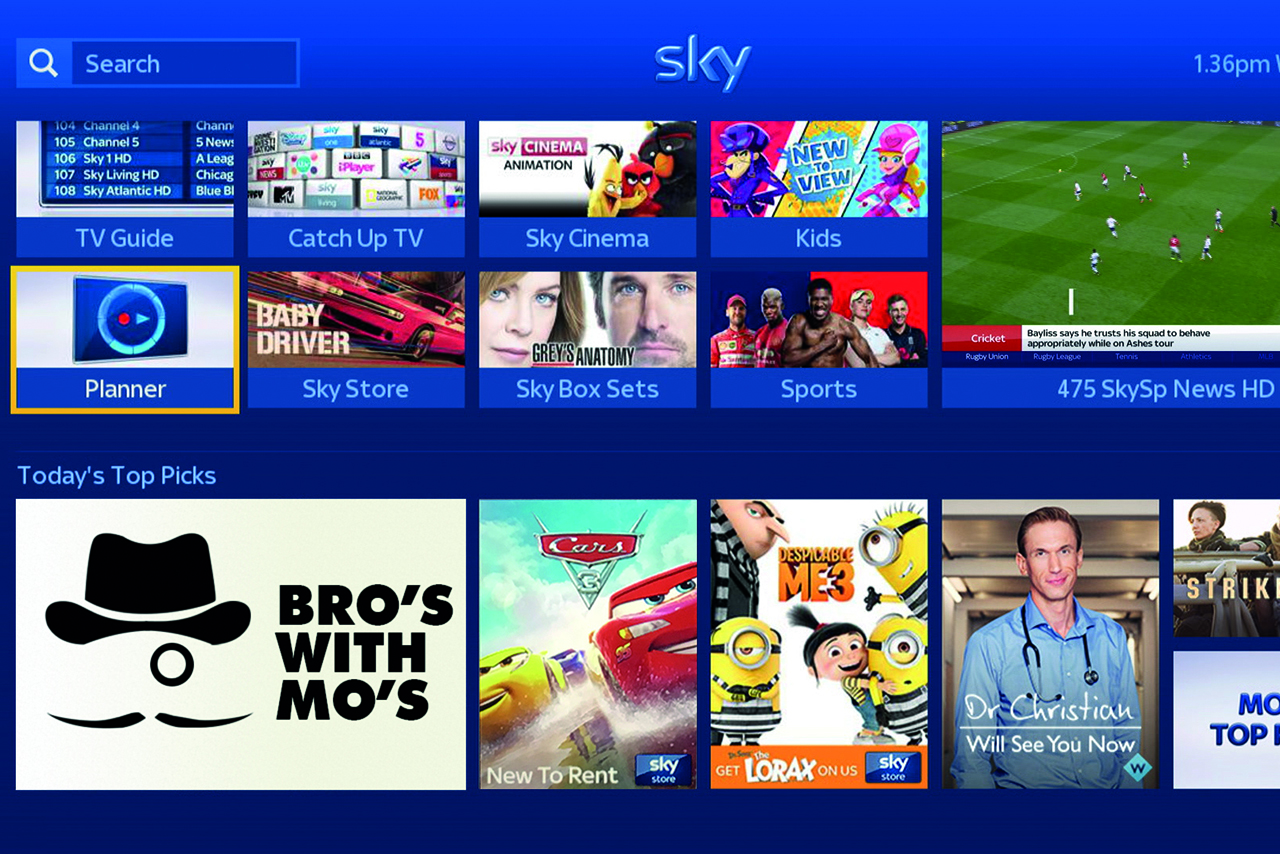 Sprinkling a little bit of magic on the campaign, Sky acquired a three-part series called Man Up that was made in Australia and funded by the Movember Foundation. The show highlighted issues around masculinity, male suicide and people’s unwillingness to talk about these issues. The specially acquired series was broadcast across Sky Sports and was also available to download on demand, driving viewing across multiple platforms and audiences.

Taking the partnership one step further, a special edition of The Debate Show aired on Sky Sports, featuring a segment about Movember and the Foundation’s work in mental health, encouraging men to have more quality conversations. Hosted by Kelly Cates, with special guests Paul Merson, Ian Wright and Chris Kirkland, they talked openly about their personal battles with mental health in a unique, editorially defining, moment, landing Movember’s messaging in premium programming.

To grow the Mo as big as possible, the partnership was amplified via Diagonal View, News UK and talkSPORT. Activity on these channels included social-media promotion, homepage takeovers, specially created radio shows and video content featuring Peter Andre and Shane Ritchie discussing their experiences and commitment to Movember. The Mo’s mojo is well and truly back.

The shavedown
The multi-award-winning campaign delivered MO-mentous results:                  - Fundraising up 16% year on year
- 67% new sign-ups to Movember (highest to date)
- 45% increase in understanding about the causes behind Movember
- Brand awareness increased by 9%
- 7% increase in conversation surrounding Movember
- Positive word of mouth increased by 8%