Following a period of turmoil, MullenLowe London has reached a defining moment. The management is tasked with licking it into shape to make it what it should be - the flagship of a successful global network. 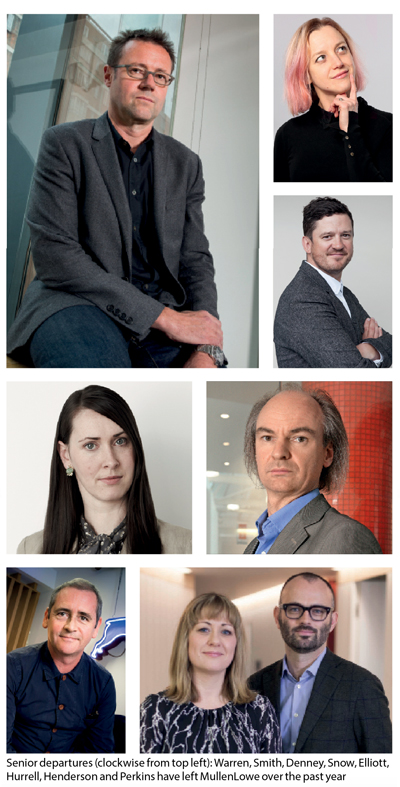 Cajoling adland to meet ambitious diversity targets must, at times, have seemed like pushing water uphill for Tom Knox during his IPA presidency. Some, however, might think it a walk in the park compared with the challenges Knox faces as he returns to his full-time day job as chairman of MullenLowe London.

Two years on from Interpublic’s umpteenth attempt to sort out its Lowe problem child by marrying it to yet another of its subsidiaries, Boston-based Mullen Advertising, the London agency is a way off matching the recent barnstorming performances of Knox’s beloved Tottenham Hotspur.

Much rests on licking the London agency into shape and having it play a significant role in a successful MullenLowe global network. Few doubt that Lowe is drinking in the last-chance saloon and that IPG, its patience almost exhausted, will merge it into another of its operating groups should the Mullen link-up fail.

"The MullenLowe network isn’t the issue," a former group senior manager counters. "It has a diverse offering, a powerful Unilever client to underpin it and is evolving into a credible third-string network for IPG. The problem is the UK operation isn’t matching it, despite everybody’s best efforts."

Knox acknowledges the past three years have been a rollercoaster ride for the London group, which comprises what was DLKW Lowe, Lowe Profero (digital), Lowe Open (shopper and direct marketing) and Mediahub (media planning and buying). But he is equally adamant that it is overcoming the knock-on effect  successfully.

"The network as a whole is in good shape, with a strong US offering to go along with what we already have in Asia and Latin America," Knox says. "The London agency should be the flagship. That’s currently not the case but we’re highly motivated."

That’s just as well, given the internal upheaval that transformation has precipitated. Indeed, the managerial revolving door has almost spun off its axis as a string of senior executives have called it a day.

The departure of Snow, one of Knox’s oldest friends, caused particular dismay. Knox insists it had nothing to do with changes at the agency but was because of Snow’s wish to work as a consultant on his own projects.

Knox insists that "calling us ‘good cop and bad cop’ is too simplistic. We’re different but complementary."

Whether the agency suffered as a result of the amount of time Knox had to devote to the IPA presidency is a moot point although he suggests the shop would have found itself in its current situation with or without his daily presence.

Many believe the agency’s difficulties in becoming a network team player stem from its original incarnation as Lowe Howard-Spink, when it was inspired by its colourful co-founder, Sir Frank Lowe, to produce some of Britain’s most iconic campaigns.

Some date the agency’s downturn back to 2005 when The Red Brick Road, a start-up agency fronted by Frank Lowe, ended its 20-year tenure of Tesco’s £45m account. "It ripped the guts out of the London agency," a senior manager remembers.

In 2010, IPG set about shoring up Lowe London by paying Creston £28m for DLKW, whose management team of Greg Delaney, Knox and Warren took command of the newly named DLKW Lowe. Knox is the only member of that team, which completed its earn-outs last year, still in place.

"It sort of worked," an insider says. However, the reverse takeover failed to have a galvanising effect similar to the one sparked at DDB by the arrival of the Adam & Eve senior team in 2012.

"The DLKW people were a good new-business team and they were available," a senior Lowe manager from the time remembers. "But I think they found it difficult to generate the necessary fire."

The subsequent loss in 2016 of the £70m Morrisons business, which had replaced Tesco nine years earlier, was described by one insider as "a huge blow", although the agency chose not to repitch for it.

By this time, IPG had opted to switch Lowe’s centre of gravity from the UK to the US, home of the most lucrative multinational clients. The fact that Mullen wanted to replicate its domestic success on the global stage made the merger argument compelling, along with the appointment of Mullen’s Alex Leikikh as leader of the merged operation.

At the same time, the merger exacerbated the tensions in London that had resulted from the 2014 acquisition by Lowe and Partners of digital network Profero to create Lowe Profero.

Dale Gall, who ran the Profero operation in London, continued reporting directly to Wayne Arnold, Profero’s co-founder, much to the chagrin of some of the Lowe UK group managers. "Profero was our poison pill," one says. "There was disfunction between us because we had our own digital capacity. What’s more, it ran counter to Mullen’s ‘hyper- bundling’ proposition in the US."

Warren, named MullenLowe Group’s UK chief executive in June 2015, resigned after less than a year in the job. His departure was said to be connected with what he saw as an unsatisfactory reporting system.

Others, however, say Lowe’s digital offering was no more than nascent compared with that of Profero. Moreover, Knox insists the issue is now fully resolved, with Profero under the same group roof and part of a single P&L.

Leikikh’s decision to have Gall succeed Warren has proved controversial and his so-called "punchy" management style is said to be a factor in the managerial exits. The no-nonsense Australian has been described as a "combative leader" who admits: "I have an open and honest style that’s not for everybody."

Questions have been asked about whether Gall has the experience to run something the size of MullenLowe London, despite a career that has included spells at WCRS and VCCP. But there’s a belief that the full-time return of Knox will provide a welcome counterbalance.

Knox insists that "calling us ‘good cop and bad cop’ is too simplistic. We’re different but complementary."

For his part, Gall is adamant there can be no gain without pain, that the agency had become bloated and non-challenging, and that recent new- business successes have been a case of running to stand still. And he suggests the staff exits may not be over, but denies Knox could be one of them.

"It’s tough being perceived as a bit of a bastard," he concedes. "I’m direct but I don’t shout and I don’t think I’m rude. But the fact is that we were in a climate where we weren’t changing and had slowed down. You can’t bring so many disciplines together and expect everybody to have a seat at the top table." New faces include 23red’s Jo Arden, whom Gall hired to replace Snow as chief strategy officer, and the7stars’ Dino Myers-Lamptey, who will run Mediahub as managing director.

"Lowe is an important brand in many parts of the world. In London, the agency is still Lowe to lots of people" Tom Knox

Meanwhile, the group has to overcome what many see as the unresolved issue of creative leadership. Last month, it appointed the Colombian José Miguel Sokoloff, global president of the network’s creative council, to the additional post of UK chief creative officer.

Although described by an agency manager who knows Sokoloff as "very dedicated, very smart and talented without being temperamental", another warns: "He’s a Club World man. It remains to be seen how he’ll cope with life in the trenches dealing with day-to-day creative issues."

But Knox says: "José is focused on making London successful and I don’t see any problem with him also leading the creative council, which is really a forum within the network and won’t take up a great deal of his time."

Whether sunnier times lie ahead for MullenLowe in London, now settled into a converted carpet factory in Shoreditch, is hard to say. Gall says a consistent new-business performance – with retail at the top the agenda – will determine whether any turnaround has succeeded. Knox believes its Unilever creative work, exemplified by "Dirt is good" for Persil, is a good calling card. Meanwhile, newly arrived worldwide account for underwear brand Sloggi will be run out of London, as will the global business from Dulux owner AkzoNobel Decorative Paints. They complement a new brief from Mars that has come via Lowe Open.

Could progress be accelerated through acquisition? IPG certainly will have noted the rejuvenating effect on its DraftFCB operation in the UK after the 2013 acquisition of Inferno to form FCB Inferno.

"I have sold two businesses and I have an entrepreneurial view: you can do things a fast way or a slow way," Gall says. "If there is an augmentation to our services that will deliver our vision of the future then, yes, let’s do it. IPG will back us on that."

What’s clear is that MullenLowe London has reached a future-defining moment. At worst, it risks becoming no more than an outpost of a US- centric network servicing Unilever and any other multinational business the network can snag.

Could one solution be that the London agency abandons its famous Lowe heritage to fully embrace the Mullen culture? "It’s not my decision but I don’t see that happening," Knox predicts. "Lowe is an important brand in many parts of the world. In London, the agency is still Lowe to lots of people. That will always be the case."

Was this a bad week for short men?