Brands are increasingly turning to 'street art' as a way to cut through outdoor clutter and make a greater visual and social impact. If done well, it can prove to be a successful marriage.

In a world where technology is dramatically changing city landscapes, with interactive, connected and dynamic screens replacing poster sites, it seems counterintuitive that some brands are turning to hand-painted advertising murals in order to communicate their messages. But according to two of the big players in the UK market, High Rise Murals and Global Street Art Agency, these marriages of street art and branding are on the rise.

What was often seen as a social nuisance has increasingly become a professionalised art form and is attracting fine artists to its urban canvases.

"We have tried to change people’s images of kids running around with spray cans tagging trains, and more into the reality of street art," Gray says. "We have a network of fine artists, many of whom do oil paintings, sculptures and exhibitions, who design murals as part of their creative talent. We’ve also worked hard to move it away from a male world – many of our artists are women."

Gray was one of the co-founders of Anomaly London, and also used to work at Naked, before moving into the business six years ago.

Meanwhile, Lee Bofkin, co-founder of Global Street Art Agency, used to be a breakdancer before he was injured and became interested in graffiti. He used his maths PHD training to take and categorise pictures of 60,000 graffiti works across 25 countries before setting up his agency with a mission to live in painted cities. Only half of its work is commercial. The rest of its time is spent promoting street art, organising murals to brighten up housing estates (Art For Estates), helping artists find legal walls to paint and running artist events. Leftover paint from commercial projects is given to its artists to use.

The art of making a mural

So how do brand partnerships work? Like most outdoor media campaigns, the murals tend to run for between two to four weeks. After this, the agencies will return the wall to its original state. Each agency has a network of walls it can use, as well as regularly scouting for new locations depending on the project. They offer a range of services from painting finished designs to producing new creative ideas. Most of the commissions tend to come through out-of-home specialist agencies such as Talon Outdoor, Rapport or Kinetic. But creative agencies and marketers also go direct.

As Talon Outdoor's creative solutions director Jay Young says: "In 2018, the demand for hand painted ads rocketed. Thus far this year, we’ve seen no sign of this slowing down. While the majority of clients sit within the fashion, beauty or music sectors, we’ve had bookings from HSBC, Virgin Atlantic and Sony Pictures – the kinds of clients you wouldn’t traditionally expect to sit on these formats."

It typically takes three to five days to paint a mural. The agencies have various artists on their books to design the murals, and a team of specialist artists to paint the walls. All the artists have health and safety training, licences and insurance. Success is measured in the same way as a billboard – opportunities to see – but online impact is also considered. The agencies are also constantly evolving what is possible with a mural.

For example, High Rise Murals has spent time testing reflective and heat-activated paint so it can better advise clients. "Heat-based paint works under heat guns, but not under the British sunlight," Gray says.

What’s in it for brands?

The key question for brands, increasingly under financial pressure, is why go to the expense and effort of making a mural? Both agencies argue the human element and the sheer craft make them more impactful than other out-of-home activity.

"A mural looks 10 times better than a poster. You can achieve vivid chromatics that you can’t in print and it’s human-powered. When it is finished you can appreciate the craft. It also tends to be bigger than 48-sheet posters, so the size and scale is impressive and that increases dwell time. It prompts people to consider how it was done, and that breeds stronger engagement," Bofkin says.

Young agrees that increased consumer engagement is the real payoff for this type of work. "If you stand outside Shoreditch High Street station on a Saturday morning, you’ll see people queuing to pose for a photo in front of the latest Ebor Street mural. You might see similar behaviour at Piccadilly Lights but there aren’t many other out of home locations with the same pull."

Increased engagement often means more noise on social media. The agencies will record timelapse videos of the murals being painted that can be used on social channels, and passers-by will often spontaneously take pictures of the ad in a way they wouldn’t with a billboard. It can also act as a good backdrop for media interviews if brands have celebrities involved in campaigns.

In a world where some question whether billboards are just visual clutter, these murals are created to fit into the area in which they are painted. "Out-of-home has always trodden a fine line – is it an intrusion into the city? To a degree, that gets worse when you turn poster sites into screens because of the additional light pollution. Our work is much more integrated into the city," Gray says.

Indeed as Young points out, the challenge is finding the right walls to paint, "The biggest challenge is the scalability outside of London. There are some fantastic sites in Birmingham and Manchester but it’s not easy sourcing walls in smaller cities. As demand grows, we have to work extra hard to open opportunities with our partners in new locations," she says.

Gray believes there has been a shift in the public and the industry’s perception of street art in the past few years: "This isn’t a guerilla marketing technique. It isn’t something that you do when you have a little marketing budget. It’s something you do to prove the craft behind your communications. It’s not an easy replicable thing by small brands to have a team of five artists spend a week putting up a piece of art for you. It’s a demonstration of human talent that people can watch. Much like a well-shot brand TV ad, this is a demonstration of scale, craft and belief in the brand." 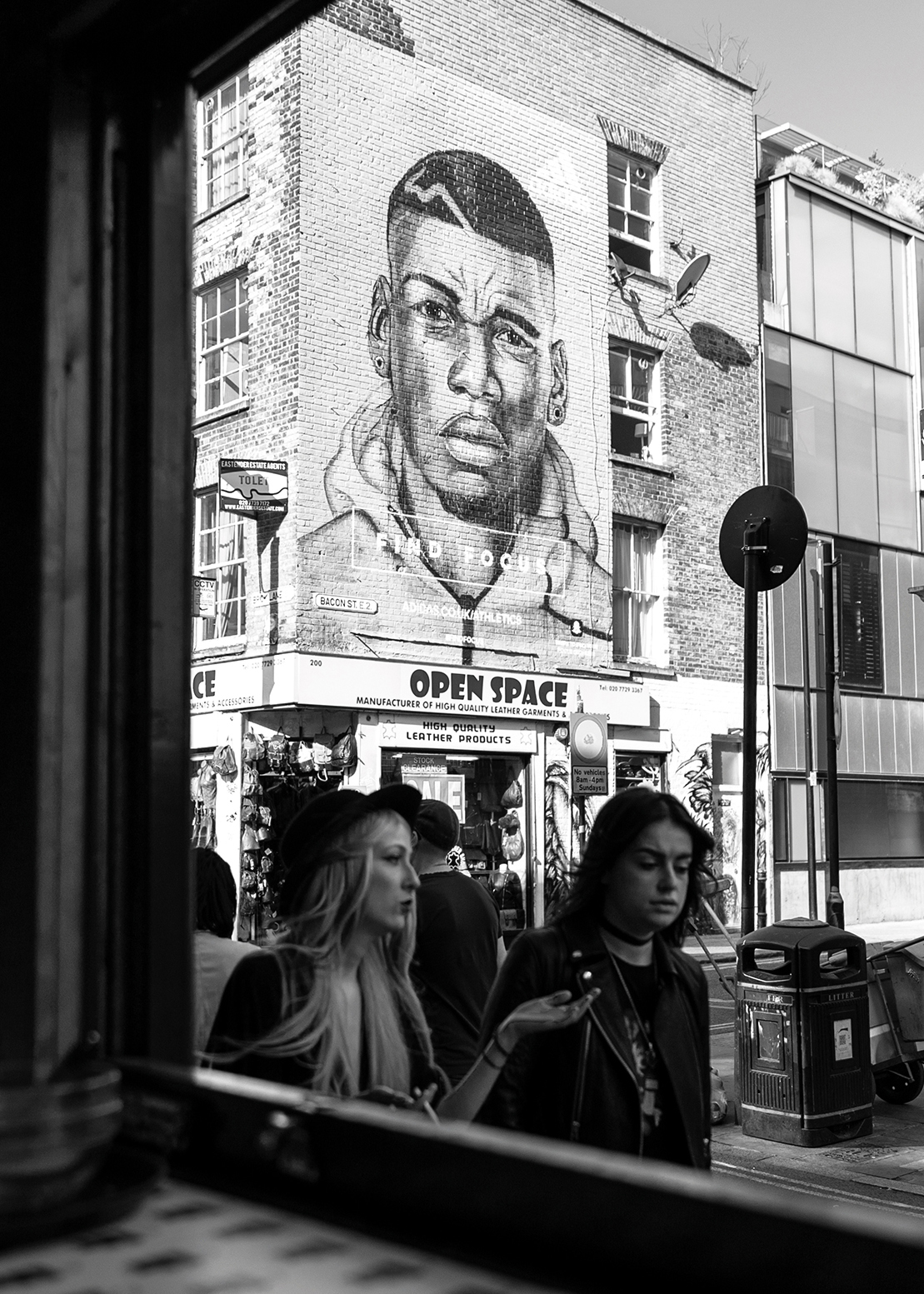 High Rise Murals has worked with Adidas for several years. In 2015, to launch the sports brand’s Find Focus apparel range, it recreated Ben Slow’s portrait of Paul Pogba on Brick Lane and Jimmy C’s (James Cochran) portrait of Gareth Bale in Shepherd’s Bush (main image). It was the first time the wall in Brick Lane was used for a mural. The close-up of the footballers’ faces was to show what it was like to be in the mind of a focused athlete.

Since then, the company has created more than 40 campaigns for the sports brand. Recently, it removed its latest work for Adidas, which was part of its Nite Jogger trainer campaign. High Rise Murals was approached by Kinetic for this campaign. As the trainer has reflective material, the company worked with Russell Signs, which added reflective strips to the mural. It ran for two weeks in Shoreditch. 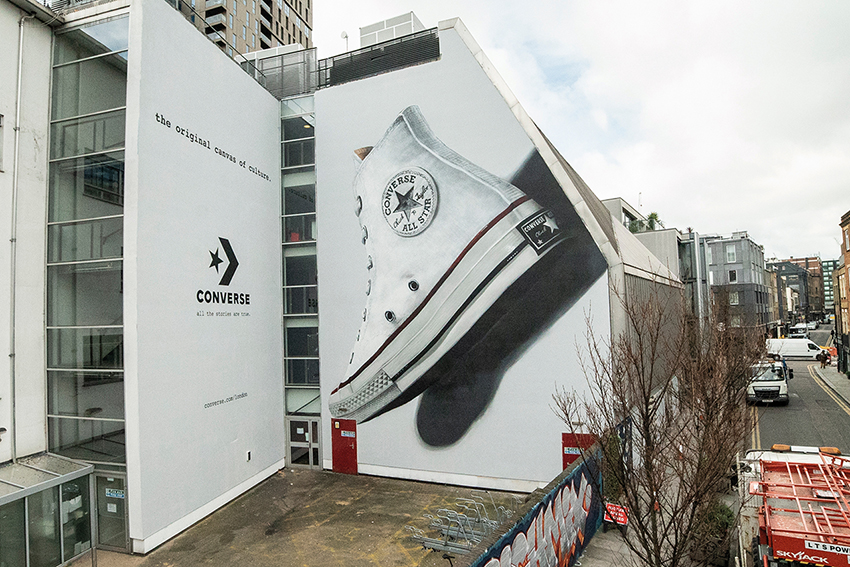 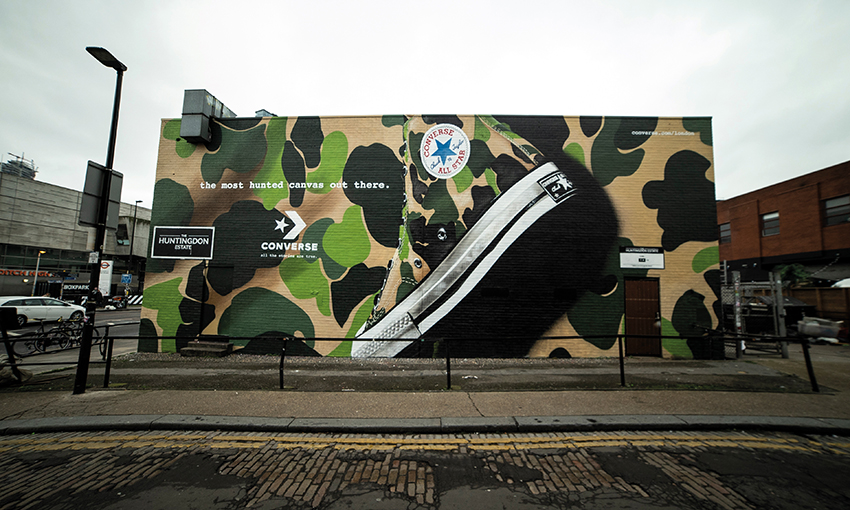 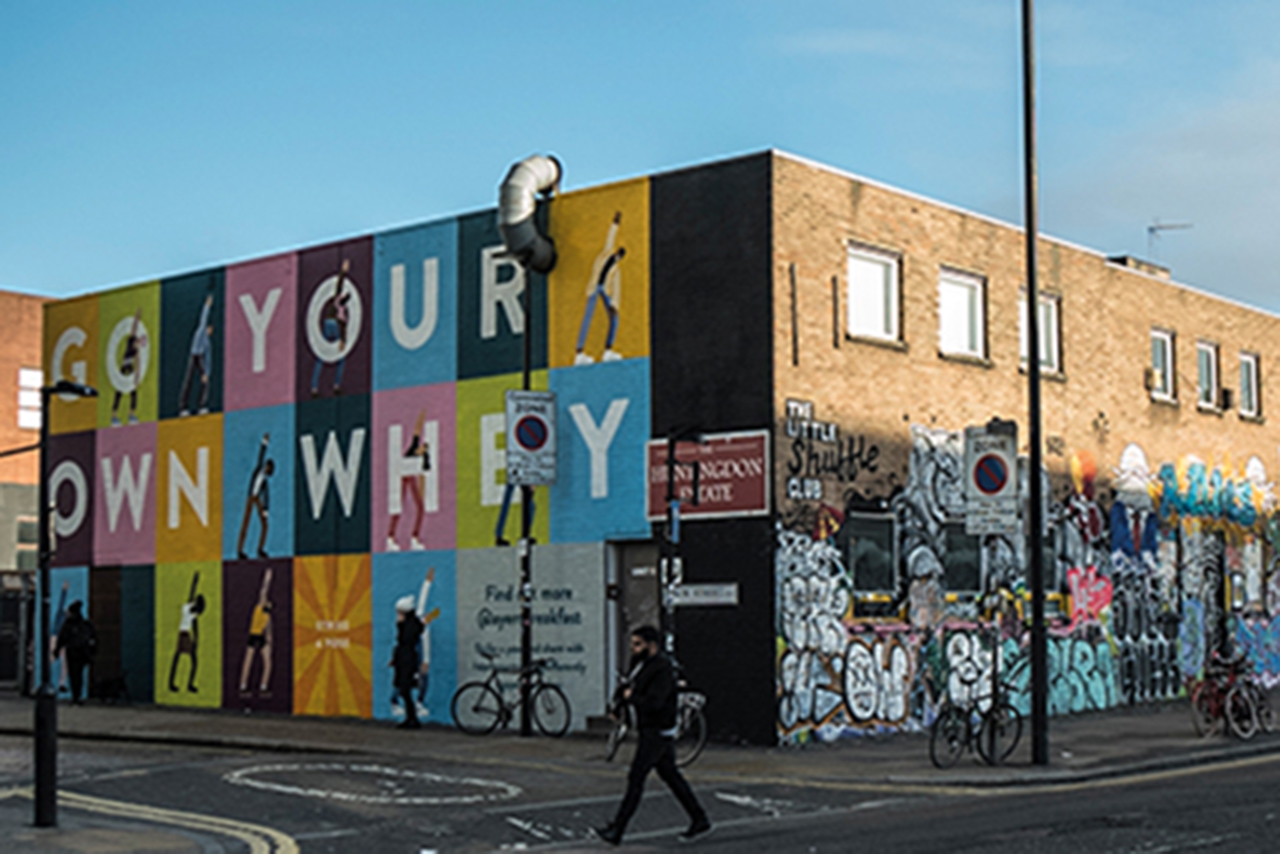 A large mural for breakfast brand Ayem was painted on Ebor Street in Shoreditch, encouraging people to "strike a pose" in front of the wall and upload it to social media. Global Street Art Agency worked with Talon Outdoor for this project. 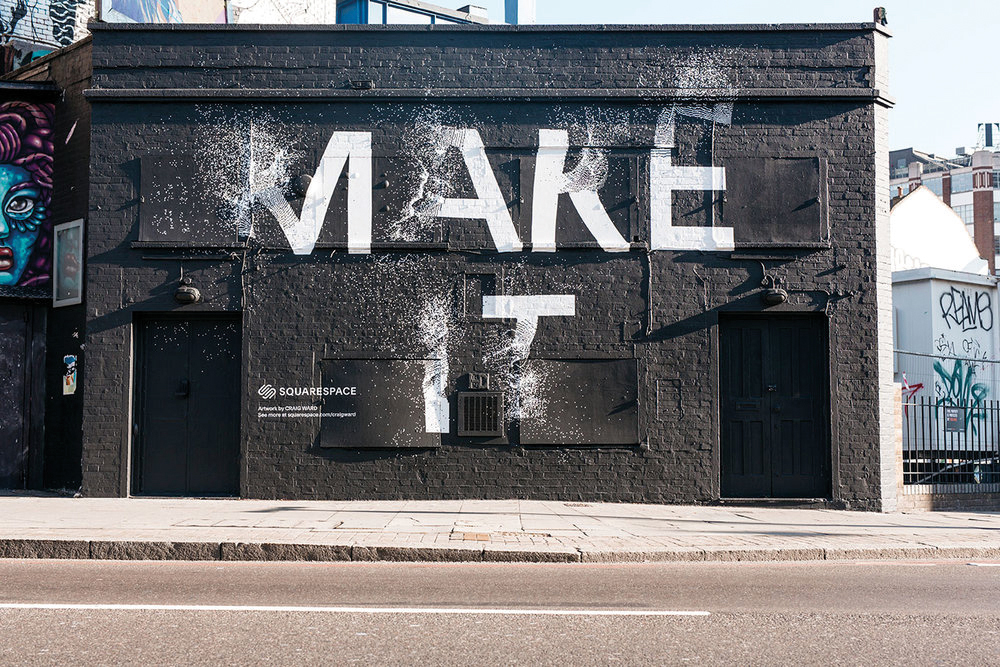 The company worked with typographer Craig Ward to create a 3D mural for Squarespace to communicate its "Make it" message in Ebor Street in Shoreditch. 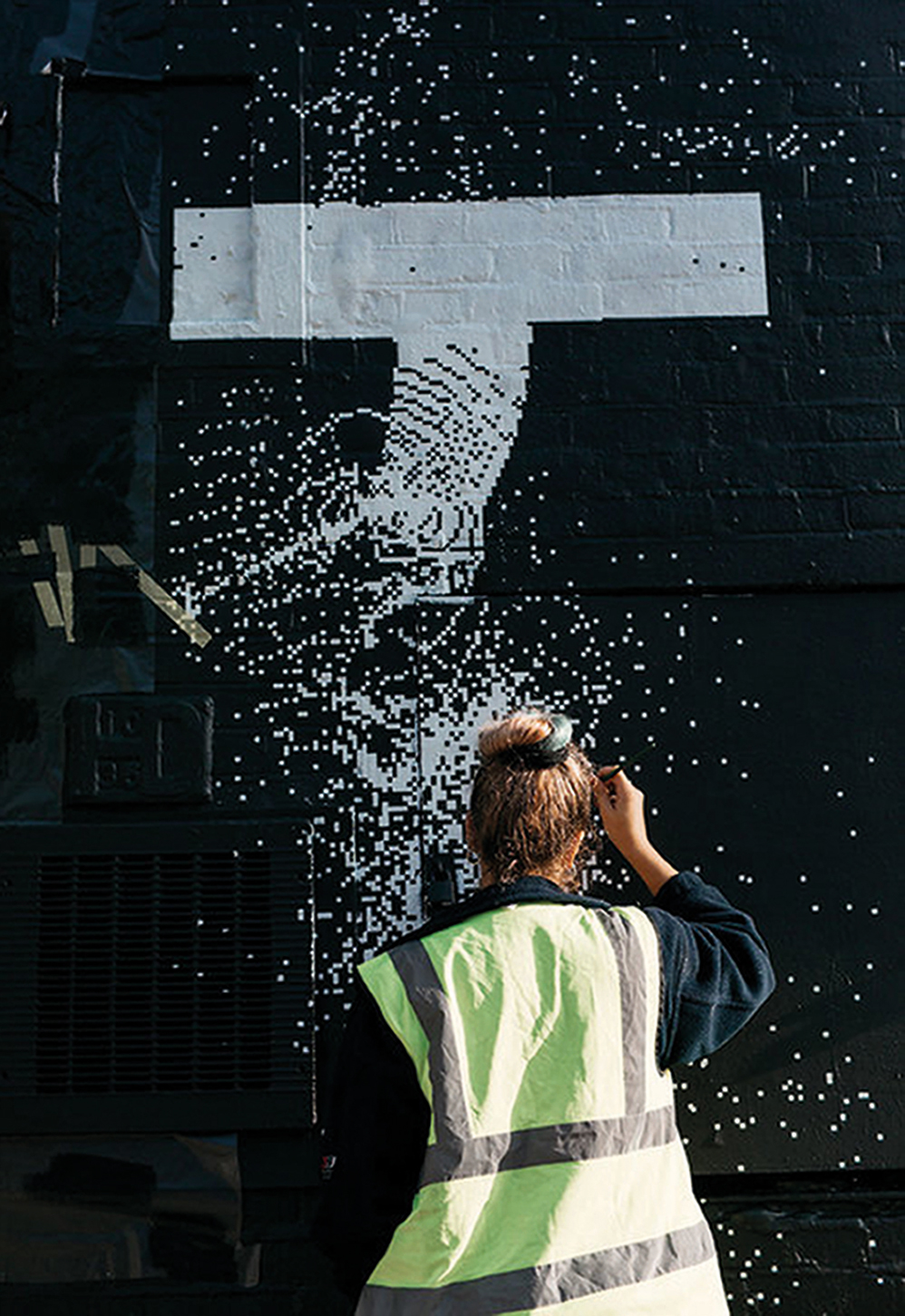 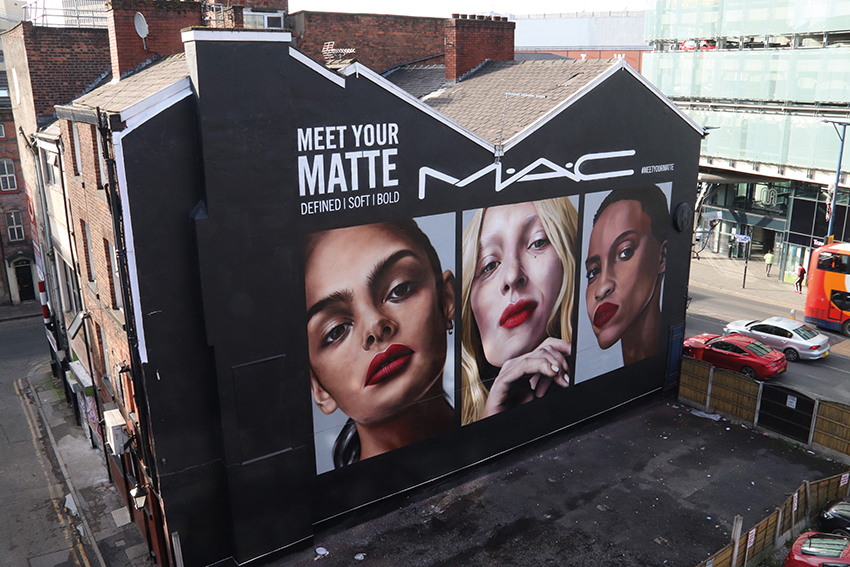 This work comprised three large murals for the make-up brand in London, Birmingham and Manchester. It was part of the brand’s "Meet your Matte" campaign. To emphasise the matte look of Mac’s new lipsticks, Global Street Art Agency gloss vanished every part of the faces other than the lips to create the matte effect by contrast. 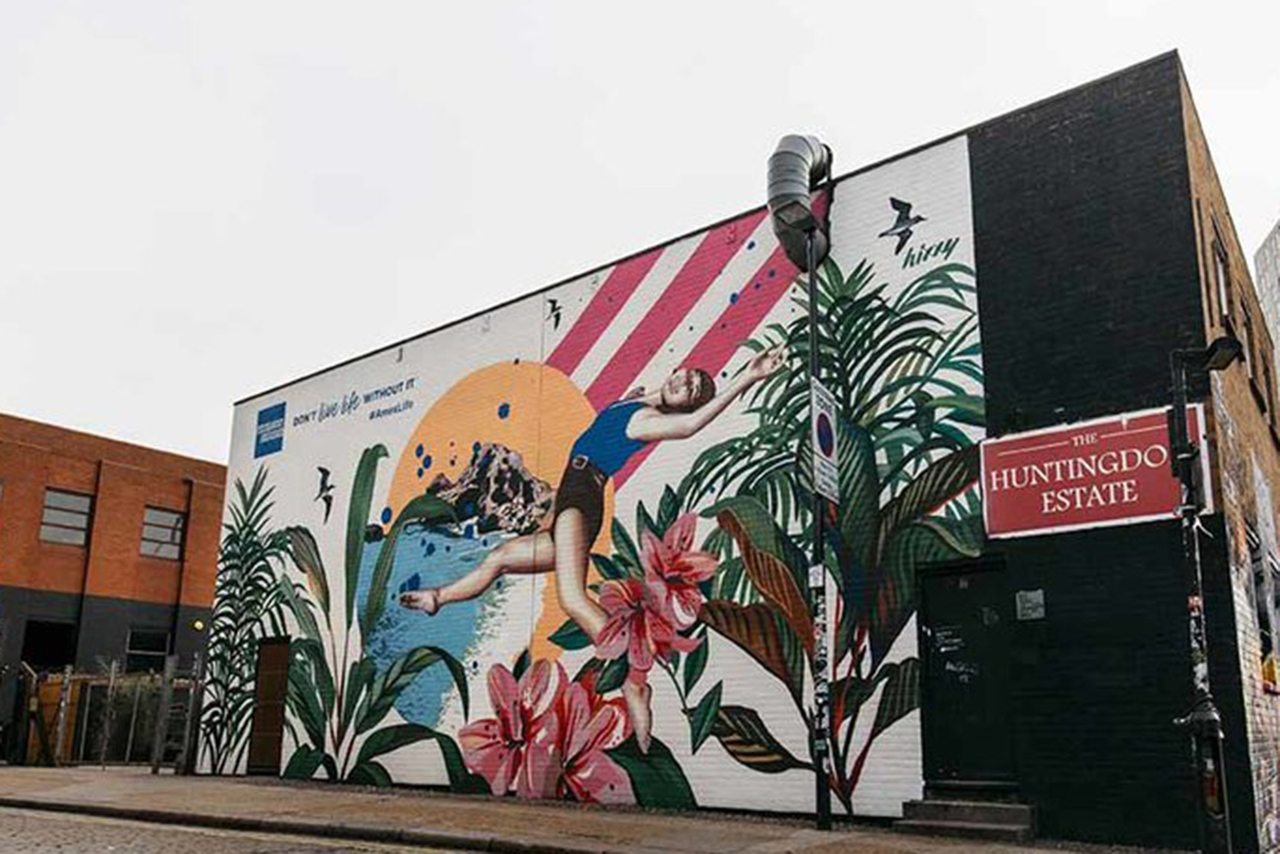 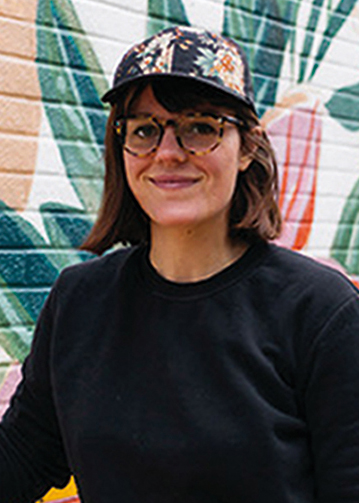 Tell us about your background.
I studied fine art at Liverpool but I got pissed off with the bullshit of creating conceptual stuff – it was purely about aesthetics. After university, I got really into screen printing, looking at how to build up layers of shapes. It was a natural progression to murals – how do you create depth through a 2D image? I wanted to do larger screen prints and my older brother, who is in the street-art business, suggested I do murals and fast-tracked me into that side. Most artists in the business come from an illustration or graffiti background. I come at it from a fine-art background, which gives me an edge designing for commercial brands. I am schooled to think more imaginatively.

Describe the creative process.
Each job is very unique – that’s what’s great about doing what I do. Sometimes I’ve been selected by companies that have seen my work online. Other times I have to pitch. Once I am given a brief, I generate two or three initial ideas, from which they select their favourite. Then there are a number of rounds of changes. Sometimes it’s good doing these more commercial jobs because the briefs might lead you down a path you would never normally take. It’s a good opportunity to try out new things and be paid for honing your craft.

What inspires you?
I am very much influenced by archival photography. I got really into collecting old Photochrom postcards. I like the idealised, mad colour palates. Someone had to fill in the black and white colours by hand. So I also like the notion that someone who had never been to these exotic locations had to sit in a dark room and in a childlike way, colour in the pictures. I also like the structure and architecture of botany and tropical plants, so I regularly go to hot houses. If you are a visual artist, you are constantly absorbing visual stuff all the time, you don’t know how it composts down.

Tell us about your American Express mural.
That was the first big mural campaign I had done. Amex’s client base tends to be older, well-heeled folk. They wanted to target younger people through this mural in Shoreditch that ran in July 2018. It was an incredibly open brief. Amex gave me the strapline: "Don’t live life without it." It was coming into summer, so they wanted it to be lively and fresh. My idea revolved around botanical aesthetics. It all happened very quickly. I submitted three ideas within 10 days and then developed one idea with them. I painted the wall with two other people from High Rise, who are specialists. I’m more of a brush painter, but with a textured wall you need to use spray paint. We went down to the wall at 8pm and set up this impressive projector, and penciled in the design with spray paint. It took us three days to paint. It was meant to be up for a month but it was extended.

At the end, the wall gets returned back to its original state. I quite like that. It keeps you forging forward. Nothing is forever. As soon as you finish a project you see ways you could have done it better. So it’s good when it’s over and it’s time to move on to the next.

How street art has changed

The street-art movement has a long history and is often interwoven with political or social commentary. In recent years, famous artists such as Parisian Blek Le Rat and Bristolian Banksy have popularised the art form.

Led by Donkeys uses politics to show the power of outdoor

Thank you for the music, Red Bull