Some brands have long musical associations, others are starting to realise its power. Event looks at three of last year's big hitters.

Music has always had a strong association with youth culture and identity. Whether it's the way you dress or your attitude, when you're young the kind of music you listen to has a huge influence on other areas of your life. This is perhaps why many brands are turning to musical events and activations as a way of tapping into that culture and engaging with a young and active audience.

Although activations at festivals have now become commonplace, a host of brands are developing their own music-based events, many done in collaboration with music or sound-based companies.

There are some brands, such as Jack Daniel's and Budweiser, whose links with music go back a long way, but there are others that are stepping out of their respective comfort zones and putting on their dancing shoes for the first time.

We take a look at four brands that have recently developed their own music-based activations, and ask why they have chosen music to 'speak' to their audiences.

Last summer the brand hosted one-off live music events under the banner Uber Live. They took place in London, Manchester, Dublin, Leeds, Birmingham and Newcastle, with users of the Uber service given a chance to attend one of eight gigs, held in secret locations, by entering a special code on the promotions section of the app. Successful applicants could request a special Uber Live vehicle to pick them up and take them to the event. Uber partnered with the Sofar Sounds music network to create the experience, which promised intimate, live performances from rising and established stars.

Why is music so important to the brand?

Sam Hancox, a UK brand and campaign manager for Uber, says the company understands music is part of the experience of taking a journey and is important to its 'riders'. Whether it's connecting to consumers' favourite playlist for their journey, or getting them to a gig, Hancox says the brand wants to make the experience their own: "Uber isn't only about getting a ride at the touch of a button, it's about making it personal no matter where in the world you are."

He says that by using music and technology, the brand can give users a new experience, helping them discover new neighbourhoods, venues and music.

The thinking behind the Uber Live event:

Hancox says the UK events were inspired by Uber Live in Chicago, which took place around the Lollapalooza festival, but adds that the brand wanted to have a more local dimension. "We originally approached our friends at Sofar Sounds with a simple idea: how can we connect people to enable them to discover live music using Uber's technology?" he says. They then worked together to produce "the largest-ever on-demand experience that we've organised in the UK and Ireland".

He adds: "It's important to partner with innovative brands. Sofar Sounds is all about creating new experiences with local rising talent and changing the way people experience music, in the same way that we are trying to change the way people get from A to B." 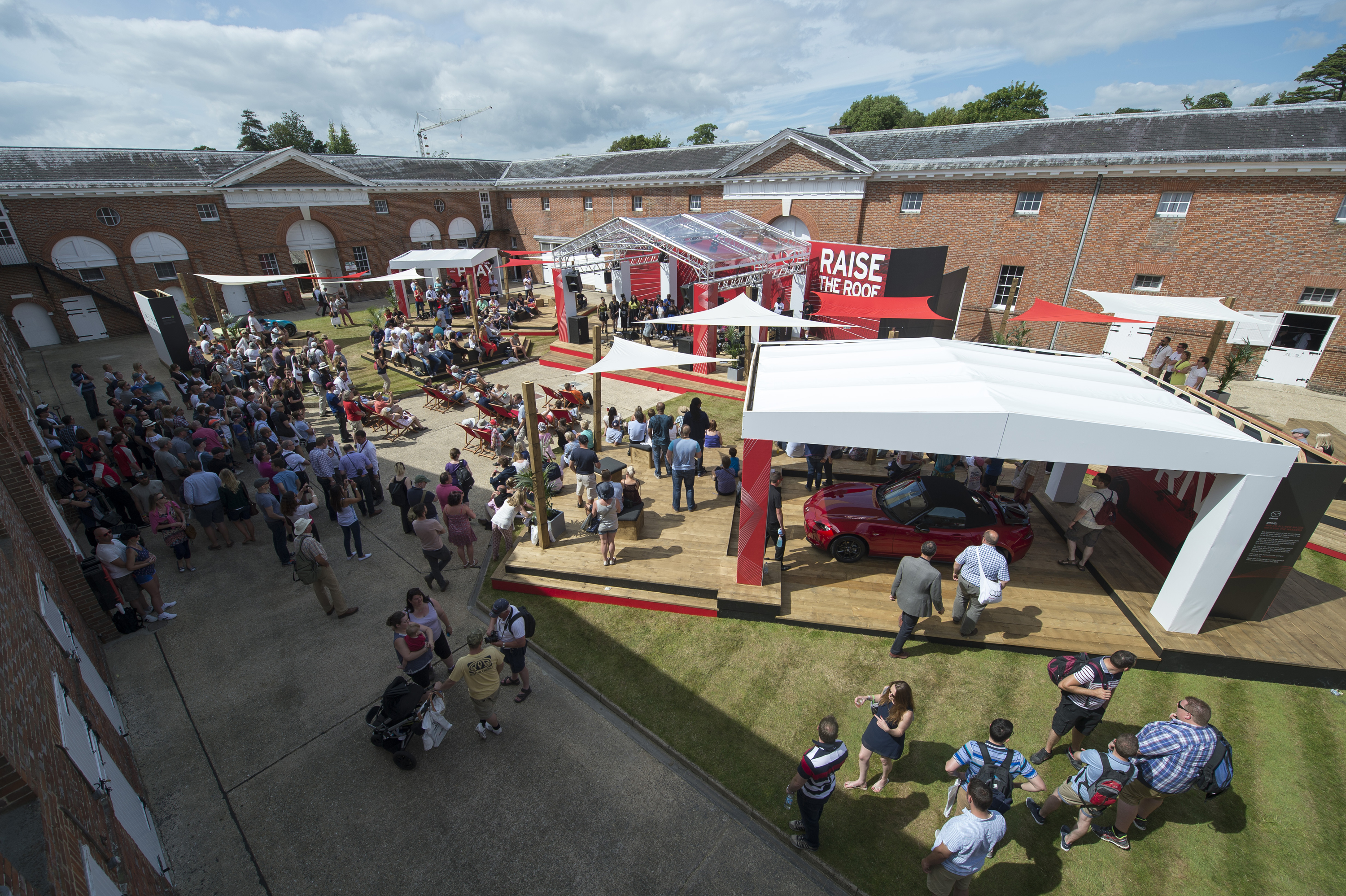 The automotive brand created an open-air music festival called Raise the Roof at the Goodwood Festival of Speed motor-racing event last summer. Emerging artistes, such as Nathan 'Flutebox' Lee - who plays a flute while beatboxing - performed in the Goodwood stable yard during the course of the four-day gathering. The line-up of performers was hosted by 6 Music's Tom Ravenscroft.

"Goodwood visitors could discover artistes and interact with the new Mazda MX-5, either by singing along inside the car or through making music themselves, by playing its bodywork using cutting-edge technology to turn the surfaces into a musical instrument," explains Claire Andrews, marketing director, Mazda UK.

The idea behind the event:

According to Andrews, the brand is leftfield in many ways, from its approach to producing fuel-efficient cars to its racing heritage. "Continuing this unconventional approach with an open-air music festival at Goodwood Festival of Speed was an effective way to stand out from the automotive noise," she explains. "We wanted to provide visitors with a surprising backstage experience, an opportunity to take a break from the high-octane side of Goodwood, and a chance to celebrate the launch of the MX-5 in a truly unexpected but engaging way."

Why is music so important to the brand?

For many Mazda owners, driving is a matter of the heart and a thrilling driving experience is often heightened by great music, according to Andrews. "When we were launching the MX-5 we wanted to share what it feels like to have the roof down and the volume up behind the wheel of a great sports car," she says.

Andrews adds that it was important for Mazda to select music artistes who shared a similar approach to the brand, in order to credibly align with its ethos.

"Instead of working with the more obvious headline acts, our Raise the Roof music festival supported talent whose approach to their craft was also unconventional, thereby ensuring that we were true to our brand DNA while also entertaining the Goodwood crowd," she says.

Engagement with the brand was fantastic, says Andrews, with 60,000 visitors spending up to 30 minutes in Raise the Roof, becoming more familiar with Mazda. The activation achieved £5m worth of UK media coverage and £10m in global media coverage, while the MX-5 launch was "the most-reported car debut, out of a total of 25, at Goodwood".

Andrews says: "We achieved a strong return on one of our key objectives: to punch above our market share weight by being the most talked-about brand. Mazda was the most retweeted brand and achieved a total reach of 22 million on social media."

She adds: "We are now exploring other opportunities to combine music and our range of new cars, so that we can provide customers with inspiring driving experiences that they'll want to share with friends." 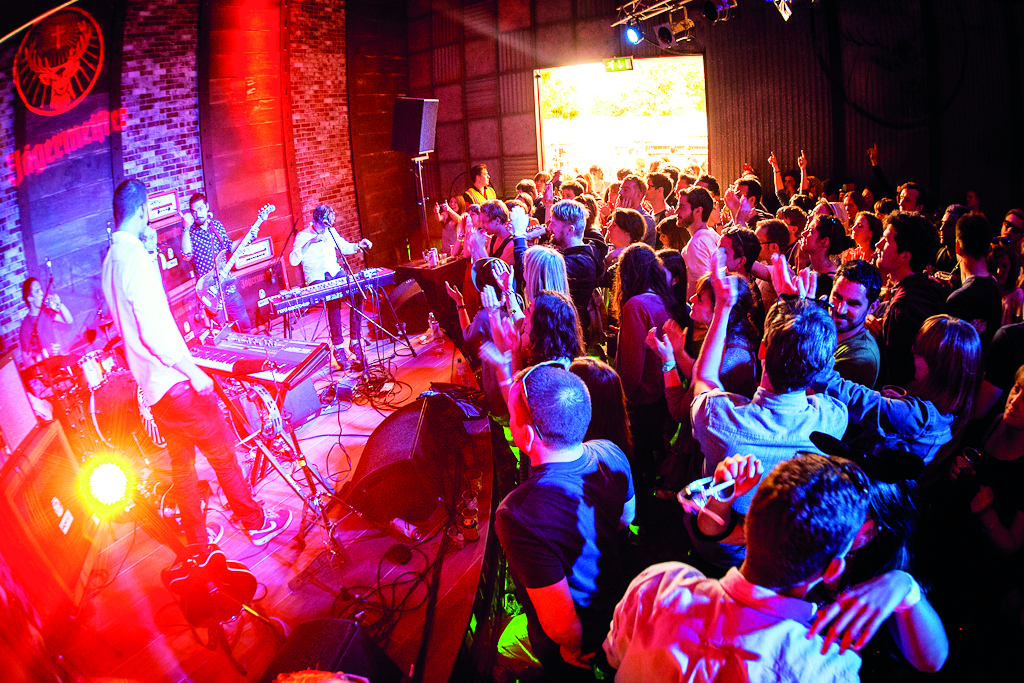 The team developed the concept of a multi-room Jagerhaus venue that would tour five UK summer music festivals. "It was a space designed to bring friends closer together through journeys of discovery, unearthing live music," says Green.

The history of Jägermeister and its music events:

Green says the brand has invested heavily across its music and events programmes in recent years, but there has been a limited focus on a common, consistent message across these consumer touchpoints. "As a result, investment has been diluted when it could have been amplified," she explains.

"Historically, our focus at events was on driving sales rather than consumer engagement. We have also faced the challenge of how to extend consumption beyond the Jagerbomb and into new, on-trend serves such as the Ice Cold Shot and our long drink, Root 56.

Green says the brand's primary challenge last year was to drive deeper consumer engagement at music festivals, "leveraging our music heritage and Jagermusic programme in an innovative way that could be amplified and help drive trial of Jagermeister's key serves". "Jagermusic is our cool, edgy programme; it defines what Jagermeister is about in terms of image and attitude," she adds.

What message do you try to get across to those who experience Jagermeister's music-related activations?

"We want to deliver a diverse and eclectic music line-up that nurtures discovery and celebrates our long-standing grass-roots programme," says Green. The brand's own music manager, Tom Carson, and Simon Singleton, Frukt's music editor, managed the line-up of DJs and bands for its festival activations. "They collaborated with each festival's programming team to ensure the music worked for the festival and the brand. It was important for us to get both aspects right."

Will 2016 see Jagermeister continue its relationship with music?

"Yes, music and music events will always be a key focus for the brand. We will continue our support at music festivals and develop bespoke music events like our Curtain Call project that is running in partnership with DIY magazine and the Ice Cold Gig series," says Green.

Last summer also saw the brand team up with Mixmag to host music events at the ArcelorMittal Orbit, which, Green says, is something that Jagermeister would be keen to do again.

Which other brands are using music in their activations?

Gap - The clothing brand has teamed up with east London's Lion Coffee & Records to host a musical pop-up in its flagship Oxford Street branch. Singers, DJs and musicians will perform in the space until 10 April.

Ballantine's - The Scotch whisky brand has been working with music broadcaster Boiler Room on an experiential campaign called Stay True Journeys, which will continue in 2016. The global initiative has comprised free live events, in-depth documentaries and artiste collaborations.

Converse - The shoe brand hosted Converse Rubber Tracks events in London in December, which saw performances, workshops and panel discussions take place over the three-day event. It partnered with online radio station NTS for a live radio show and party.

Russian Standard - The vodka brand hosted late-night performances as part of its sponsorship of the Edinburgh International Festival last summer. It also hosted the House of Davai welcome party at the inaugural Lost Village Festival in Lincolnshire last May.

Research aims to get to the heart of London's influencer events

The Music Report: Always on...

The Music Report: All the world's a stage