In its latest quarterly results, food giant Nestlé for the first time began reporting the performance of its Nespresso business unit separately.

You might expect that the brand has done well, with consumers being confined to their homes for much of the past two years. As the lockdowns begun to bite, splashing out on a shiny piece of kitchenware could have been a welcome distraction from the banality of being stuck indoors, and mugs of Nespresso might substitute for cups grabbed during commutes in the before times. And indeed the numbers suggest these are safe assumptions. Nespresso reported 16% organic revenue growth for the latest quarter, with overall sales (machines plus coffee pods) increasing over 20% year on year.

Despite this bump, the brand’s chief brand officer, Anna Lundstrom, is pushing hard to ensure the company builds out a durable brand that can sustain pandemic-primed growth even as the world begins to return to some kind of normalcy.

“People have really increased their consumption of coffee at home," she admits. "We've been lucky. We've, had a direct-to-consumer model, since the very beginning … so that's really helped us, to continue to connect with our consumers. And that’s made us think about how to go further with our connections with consumers.”

To do this, Nespresso and Lundstrom have, for starters, returned to the actor George Clooney, who has been associated with the brand since 2006. Nespresso’s recently launched "Made with care" campaign, says Lundstrom, aims to “showcase the deep human care that goes into every cup of Nespresso. We really wanted to find a way to make sure that consumers really understand this message of care.”

However, Lundstrom hasn’t leant on Clooney’s charm alone to build Nespresso’s brand and business across the world.

“One thing that we did last year is we launched what we call Nespresso Editions, our digital engagement platform, to try to bring moments of inspiration to accompany consumers' coffee moments at home,” she says.

“By bringing, different artists and chefs and musicians and having these moments of inspiration [we aim] to further the engagement with our consumers.”

Cecylia Grendowicz, a senior strategist with branding agency Superunion, contends that pre-pandemic, coffee drinkers were spoilt for choice. Nespresso had to compete not only with other at-home products, but also with coffee shops, from the big chains down to an ever-growing number of boutique cafes.

While Nespresso may have gained a brand edge once working and studying from home became a reality, she argues that as budgets begin to pinch, the path ahead, from a brand perspective is challenging.

“In a time of economic uncertainty where many will have to cut back on luxuries, Nespresso’s competitive set may become a little harder to define," she says.

"The brand will find itself competing for share of wallet, but also heart and mind, with the other little luxuries that have improved lockdown life, like skincare, gaming and streaming services and bath products.”

François-Xavier Roger, chief financial officer for Nespresso's parent company, Nestlé, provided some context to analysts on Nespresso’s performance and odds of continued growth. The brand's organic growth, he said on an analyst call, came from "a combination of increased frequency and increased penetration. We had a very strong sales development in the US, but Europe grew very nicely and so did Asia … We gained market share basically across geographies as well.”

To tap into the heightened interest in the brand, Lundstrom says, Nespresso needs to not just continue to churn out its usual range of capsules and machines, but also expand its product range to appeal to a wider set of consumers.

“There are hundreds of different ways of drinking coffee," she says. "But I think if you look at our consumers around the world, there are certain elements that they have in common. They all have a passion for quality coffee [but also know] the importance of making a sustainable choice when it comes to their coffee.” 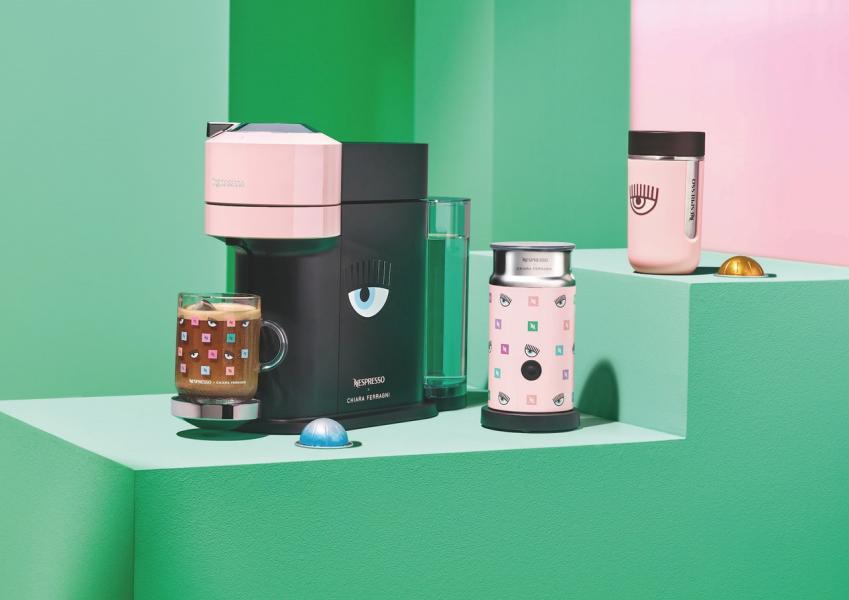 On the environmental front, the brand clearly faces challenges. While it claims a high global recycling rate and boasts about how it offers 100,000 collection points around the world, some industry watchers suggest that only 5% of all coffee pods are recycled.

As a lifestyle brand, the key focus for Nespresso is to “that we are part of all those potential coffee moments in our in our consumers lives.” So, it has launched the Nespresso x Chiara Ferragni collection (pictured above), along with the social-media influencer and entrepreneur behind the Blonde Salad fashion blog. Then, the brand launched a range of coffees from around the world. The Master Origin Nicaragua La Cumplida Refinada is its first seasonal coffee from Nicaragua, which uses a fermentation technique.And Nespresso’s World Exploration range includes Shanghai Lungo, which it says captures the emerging Chinese coffee culture with a light roast blend that combines Kenyan, Chinese and Indonesian Arabicas. Tokyo Vivalto Lungo meanwhile, in a nod to the richer coffee enjoyed in Japan, is a blend of Ethiopian and Mexican Arabica.

For Nespresso, the challenge is to not just be a hip coffee label, but also to ensure it resonates with its audience—young and aware coffee drinkers—who have certain expectations of the brands they patronise.  “That's why this campaign is so important to us, because it really goes also beyond…just the cup and the taste, to make sure that everybody understands that the care that we have for quality, process [and] the environment, and our partners who are involved in crafting that cup of coffee.”

“Clooney is now well known for his humanitarian work and political activism, as well as his connoisseurship, cemented by the founding of his tequila brand Casamigos. There’s a sense that he wouldn’t put his name to something unless he believed in it,” she contends.

“So as Nespresso increasingly puts more time and effort into its sustainability initiatives, Clooney’s high level of involvement lends the brand an authenticity and credibility envied, no doubt, by many.”

To try to promote the brand, Lundstrom is keen not just to drive Nespresso’s business online and offline, but also to devise content with an increasingly wide array of creators around the world.

“The next year is going to really be about building on this campaign and showcasing more content on various different platforms,” she says. For example, the brand wants to showcase its AAA Nespresso Sustainable Quality Program, which works with farmers in Zimbabwe, Congo and beyond, in order to build a connection for consumers to what happens on the ground.