Heinz drops out of top 10 and Ikea falls to seventh place in YouGov rankings.

Netflix has once again become the most-improved brand of 2020 as the nation has been stuck indoors for much of the year because of the ongoing coronavirus outbreak.

The survey by YouGov also found that high-street staple John Lewis has continued to impress consumers, holding on to the top spot.

The report gave Netflix a score of 42.2 (a rise of 7.1 from last year) and placed it behind John Lewis. It is the fourth consecutive year that John Lewis has claimed the top spot, with a score of 42.6 – 1.4 points higher than last year.

Amelia Brophy, head of account management UK at YouGov, explained that, although John Lewis has faced financial hardship this year in having to close stores and making job cuts, "the rankings show the power of a strong brand".

Last year’s fourth-placed brand Heinz has dropped out of this year’s rankings altogether, in spite of creative work to mark Veganuary and a campaign highlighting the issue of child hunger in the UK.

Ikea has also fallen down the rankings, from second place in 2019 to seventh this year, even though it achieved a higher score this year than last year, up from 38.9 to 41.1. "This appears to be because other brands have significantly improved, rather than Ikea's own failings," the report said. 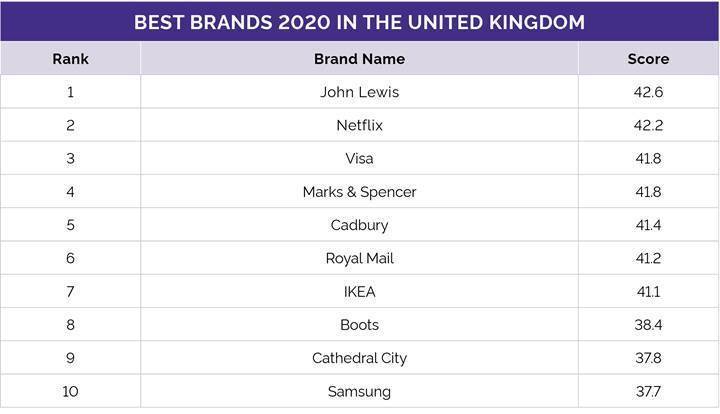 The rise of Netflix

While many brands have struggled in light of the coronavirus pandemic, Netflix has benefitted from an influx of consumers being forced to stay at home.

The platform has collaborated with film score composer Hans Zimmer and Magic radio this year alone, and brought its binge-worthy content to the fore in a global campaign by AKQA which launched in September.

Brophy said: “The streaming giant has released a stream of exclusive programmes and films throughout lockdown, earning itself second place in our UK rankings, the most-improved brand in the UK and the sixth-best brand in the world.

"Undoubtedly, the coronavirus crisis has created a changing consumer market that will require brands to listen to consumer needs and wants and change accordingly – Netflix has achieved this and has subsequently significantly improved its standing from our 2019 rankings.”

Netflix unveils light installation for Over the Moon film release