As people endured another quarter of being locked at home to cope with unceasing waves of the pandemic, Netflix saw a sharp spike in its usage numbers, revenue and profit. As the video streaming service reported sharp growth in its financials for its fourth quarter and full financial year, its robust performance also helped its balance sheet, with the firm no longer expected to lean on external borrowing for its day-to-day operations.

For its full financial year, Netflix reported that it had crossed 200 million subscribers, adding some 37 million of them across the year and 8.5 million in the last quarter. Its revenue soared by 24% year-on-year to cross $25bn (£18.3bn), even as its operating profit rose by 76% to $4.6bn. For the fourth quarter, Netflix's profit was $542m on revenue of $6.6bn. 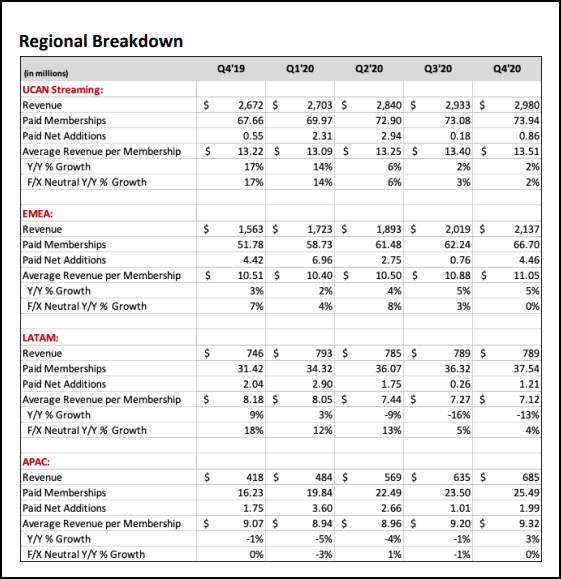 Its fiscal performance was aided by lesser spending due to limitations imposed on content production. For this year, the company boasted that it had positive cash flow for the first time in a decade (it posted positive gains of $1.9bn) and wouldn't have to borrow externally to fund its operations.

In a note to shareholders, Netflix stated it is becoming an increasingly global company in terms of subscriber numbers: 83% of of its paid net additions in 2020 were from outside North America.

The EMEA region accounted for 41% of full year paid net additions, while APAC was the second largest contributor to paid net additions with 9.3 million, growing the fastest at 65%. In terms of guidance, for Q1 of 2021, the streaming service expects to add 6 million paid subscribers, compared to 15.8 million in the comparable period last year. While Netflix added millions of new subscribers, it struggled to increase the average spend on the platform in Q4.

"We’ve made good progress growing our profitability with FY20 operating margin of 18% rising five percentage points over prior year," the company noted.

Away from the nitty gritty of Netflix's financials, its content production engine continued to churn out a series of blockbusters, with production mostly back to full steam.

In the shareholder letter, Netflix noted that there are over 500 titles currently in post production or preparing to launch, and it plans to release at least one new original film every week in 2021.

As in previous years, Netflix had a range of content that fared well, from returning seasons of dramas such as The Crown (a cumulative 100 million people have watched it), to movies such as Midnight Sky and regional offerings such as The Barbarians in Germany and Sweet Home, the Korean language horror show, with 22 million viewers.

Even as Netflix churns out this content, it is aware of the growing—and changing—competition for its subscribers screen time. "There are a wealth of options ranging from linear TV to video gaming to user generated content on YouTube and TikTok," the company admitted, also mentioning Discovery's  streaming service, Disney+, and ViacomCBS' Paramount+.

"Combined with the launch of AppleTV+, WarnerMedia’s HBO Max, and NBCUniversal’s Peacock streaming services, this signifies that these companies all recognise the future is streaming entertainment, a vision we have been working towards since inception," the company said.