We asked employees at Haymarket Media Group why they enjoy the reverse commute to work at their Twickenham office.

There’s a new craze taking hold of Londoners - they’re commuting out of London. No longer essential to live and work in London, many are escaping the city to find a better work-life balance in the suburbs.

As businesses move away from higher rents and shrinking offices, their employees are moving with them. Shifting away from sweaty tube commutes towards air conditioned car drives or shorter train journeys, these employees are getting the best of both worlds. Living in the hustle and bustle whilst working in the leafy suburbs.

The rise of commuting out of London

Have you ever stared longingly at the empty platform opposite as you’re herded onto a cramped tube with your nose uncomfortably close to someone’s armpit and a school child happily kicking you in the shin? Do you get to work and feel like you shouldn’t have bought that now soggy avocado on toast before getting on the train?

If this rings a bell, then maybe you should consider reverse commuting. Lots of other Londoners are realising the benefits of commuting out of London for work. Not only does it offer an escape from the rush-hour, but also the opportunity for better working conditions.

There are lots of very good employers relocating to the suburbs thanks to the appeal of cheaper prices and larger office space, which means they can offer alternative benefits to their employees than a central London office.

For example, Haymarket Media Group relocated to Twickenham in Winter 2015 after the closure of its Hammersmith offices in 2013 and 10 years at Teddington Studios. Lots of their employees commute from central London to their Twickenham offices situated just five minutes across the road from the station with fast links to Clapham Junction and London Waterloo.

Haymarket Media Group offers a comprehensive benefits package including a very generous 8% employer contribution pension plan, 6 x salary life assurance, up to 30 days holiday and a fabulous income protection policy. They also throw an incredible annual Christmas Party at the Hilton Park Lane, including their infamous Haymarket awards, which recognise the hard work of their employees.

But, Twickeham itself boasts many benefits to their employees and is a part of what makes Haymarket Media Group such a brilliant place to work.

Why is Twickenham such a great place to work?

Twickenham is only 12 minutes from Clapham Junction, 20 minutes from Waterloo and half an hour from Victoria, making the commute from central London quick and easy. Plus, Twickenham train station is directly opposite Haymarket Media Group’s office making it even easier.

Sarah Bassett, learning business partner at Haymarket Media Group, says her commute is "Brilliant!". She worked in London before and adds: "It used to take me over an hour each way because of the commuters and tubes. Now I get one mainline train and a seat - amazing!"

Similarly, Gary Charlton, head of procurement at Haymarket Media Group, appreciates the frequency of the trains commenting: "It's good to know that if I miss one train or it's cancelled, that another one is usually along in the next 10 mins".

Rosie Henshall, senior sales executive at Haymarket Media Group, says: "My commute is really easy, especially as I'm going in the opposite direction to everyone else! On a good day it's a 20-minute train ride and I'm always able to get a seat!".

It’s not just about the commute, Twickenham is a little oasis of green within easy reach of the city. With York House Gardens proving a popular lunch spot and Twickenham riverside a great place for a run, the area offers plenty of opportunity to explore the open air.

"I love working in Twickenham because you have the greenery of places like York House Gardens and the river nearby, whilst only being 20 minutes from Waterloo, making it easy to get to Central London too," Henshall adds.

Gemma McIntyre, account manager at Haymarket Media Group, says: "I often run by the riverside to Richmond [on my lunch break] which is lovely on a sunny day, I catch up with friends in the cafes and stroll down to the charity shops."

Twickenham has lots of parks and walks to wander on your lunch break, such as Twickenham Green and the Crane Park Walk, which can be reached from just around the corner from the Twickenham office. So, if like Gemma you’re looking to escape "the hustle and bustle of central London" and enjoy a "relaxed vibe," Twickenham may be the perfect area to work. 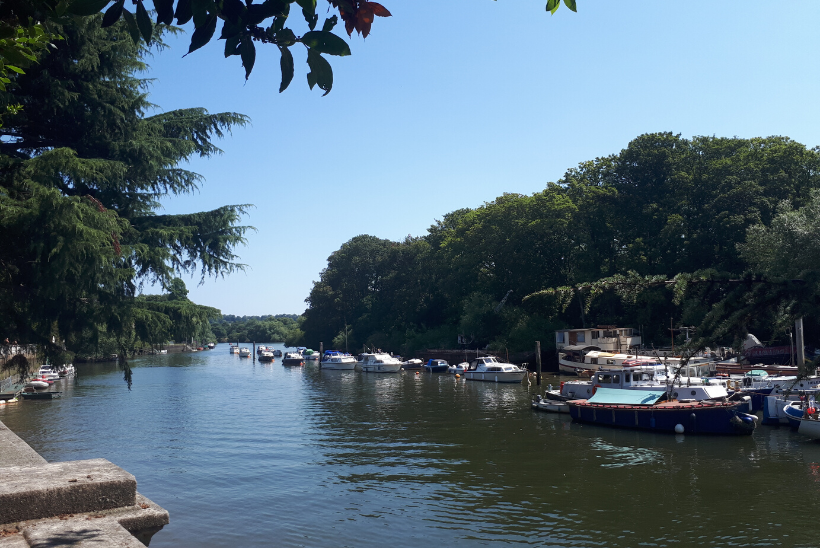 Plenty of eateries to suit every audience

If the greenery of Twickenham doesn’t attract you, then maybe the plethora of lunch-time options might. Twickenham has its fair share of popular chains, such as a large newly-opened Starbucks, a Costa and a Caffe Nero, but also independent little cafes, pubs and smaller chains like Avocado & Lemon and The Press Room.

McIntyre comments: "The Fox has a lovely beer garden which is great for a sunny lunchtime or drink after work. Valentino’s Belissimo is a must if you are a fan of Italian food and Rosie Chai is a cute independent cafe with a lebanese twist".

For a Friday treat, Twickenham also has a Nandos, Zizzi and Pizza Express, as well as some lovely pubs, such as the Sussex Arms, Princes Albert and The Crown.

Haymarket Media Group offers staff discounts at many of these options, ranging from up to 30% off food and/or drink as well as special offers.

Evening drinks at The Cabbage Patch

If there are plenty of lunchtime options, it follows suit that there are plenty of places for drinks after work too. Haymarket Media Group’s Twickenham offices are a five-minute walk from local rugby pub, The Cabbage Patch and across the road from unique restaurant and bar, The Shack 68, with discounts for staff members available at each.

Further afield, you can find the Royal Oak, which is a popular after-work drinking haunt with delicious food to boot. Or, if you fancy a trip to the riverside, The Fox, Eel Pie Pub, Barmy Arms and The White Swan are firm favourites amongst Haymarket staff.

James Marshall, information security and communications manager at Haymarket Media Group, has "been known to spend a bit of after-work time in The Cabbage Patch or White Swan" as have many Haymarket employees.

Henshall comments: "There are lots of pubs to pop to after work. The Cabbage Patch (right next door to the office!) is always a popular choice but there are lots of other lovely ones, such as The Fox that also give Haymarket discounts".

Bassett concludes: "They're always quick and serve really nice food, and the pubs are a friendly place to drink; all within walking distance from work and the station".

A little culture on your lunch break

It’s also home to the Mary Wallace Theatre where The Richmond Shakespeare Society of highly-respected amateur dramatic actors and actresses perform eight productions a year, including their founding open-air performances. The small theatre is a hidden gem.

Similarly, The Exchange right next to Haymarket’s offices comprises of a theatre, five studio rooms, a cafe and a bar. A community project, the event space offers everything from comedy performances to music concerts, theatre performances to family-friendly events, as well as space for short courses and training. A yoga class takes place every Friday morning before work, which is popular with Haymarket staff.

McIntyre enjoys a bit of yoga after work commenting: "Sometimes I do yoga in the Yoga Bar which is my haven and a good way to relax after a busy day. If you want more of a lively night, there is a new B@1 that has just opened, which is great fun!" 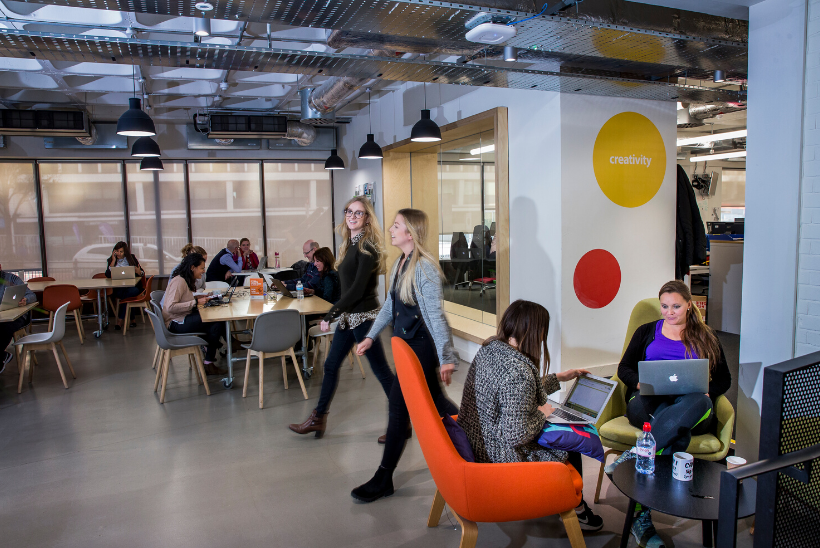 Haymarket Media Group creates award-winning specialist content and services for international audiences. They have more than 70 market-leading brands created by world-class experts in locations such as the UK, the US, Hong Kong, Singapore, India and Germany.

Their consumer and professional brands connect people and communities across digital, mobile, print and live media platforms. Although Haymarket's portfolio is diverse, its mission is the same across borders and markets: to deliver brand experiences which truly meet the needs of its audiences and clients.

Its Twickenham office houses roughly 750 employees working across various divisions and specialisms, from Automotive to Medical, IT to editorial. Whatever your profession, they’re likely to be looking for you.

What is it like to work at Wonderful Workplaces?

What is it like to work in the events team at Haymarket Media Group?

What is it like to work in the recruitment sales division at Haymarket Media Group?

What is it like to work in the medical division at Haymarket Media Group?

What is it like to work in Haymarket's automotive division?