The state of brand trust in Britain is at a low ebb, with just 10% of people saying they trust brands as much as they used to, according to new figures from Brand Vista.

"A brand is a living entity and is enriched or undermined cumulatively over time, the product of a thousand small gestures"  Michael Eisner, Disney

Come on, tell the truth; how much attention does your business pay to customer research? Don’t cheat, I mean genuine attention to those results which could signal real change for the better?

If your answer is ‘not much’ then you are not alone. Many of us spend a lot of money asking what people think of our businesses and then believe the good stuff and put the bad stuff down to ‘just one of those things’.

Let’s face it, sometimes we don’t like the brutal truth, it is hard to take, hurts us personally and undermines our credibility. Easier to ignore it. File it.

Some huge brands have come unstuck by ignoring only very basic customer research. These mistakes have cost billions of pounds, 1,000s of jobs and huge corporate and personal reputations.

So we set out to find out what the state of brand trust is in Britain. In January 2008 we ran a national survey structured to mirror the national profile and we asked some brutal questions about trust and people’s attitudes to how it is built; the results were startlingly bad so we re-ran it last month.

Here are some highlights. Make sure you are sitting down.

Most companies say they put the customer first; surely the great British public believe them.

Twenty five percent of people strongly agreed that "In general, companies do not put customers first". Another 36% tend to agree and alarmingly, only 14% disagree.

And, despite the recession when you’d think companies would be bending over backwards to keep their customers, the proportion who strongly agreed is 20% worse than it was two years ago.

To what extent do you agree with the statement: "In general, companies do not put customers first" on a scale of 1 to 5, where 1 is strongly disagree and 5 is strongly agree 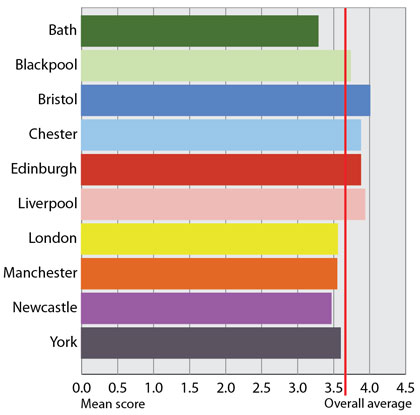 What has happened to all those carefully crafted visions and missions that we pin to the doors of our offices and shops and print in nice big letters on millions of mouse mats.

Could it be that mouse mats don’t work?

Only 10% of people say that they trust companies as much as they used to.

OK, so you would expect it to be low, but 10%? That barely registers. Does this mean that corporate Britain has lost all trust? Even if this were half of what it really is, it still shows an alarming lack of trust in our brands.

So it is no surprise that the research also revealed that 94% of people agree that they place more importance on what companies do rather than what they say. This is up from 81% two years ago. Just think of the implications.

And just when you think it couldn’t get any worse you find out that people will only give you one chance to get it right. In fact, according to this research, only 12% will give you more than one chance.

There were also some very interesting regional differences. The least trusting cities are Bristol, Chester and Liverpool whilst the most trusting is Newcastle.

To what extent do you agree with the statement: "I do not trust companies as much as I used to" on a scale of 1 to 5, where 1 is strongly disagree and 5 is strongly agree 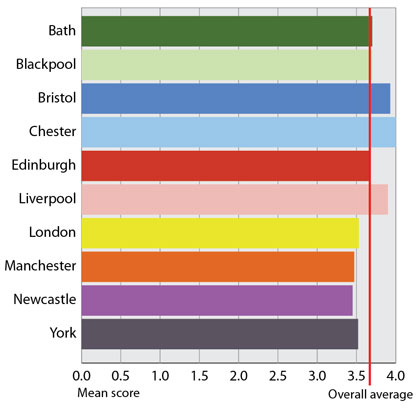 We also get less trusting as we get older (the big turning point is 35 years old) and women are more trusting then men. The most demanding cities in terms of service are Chester and Edinburgh.

To what extent do you agree with the statement: "I do not trust companies as much as I used to" on a scale of 1 to 5, where 1 is strongly disagree and 5 is strongly agree (by age) 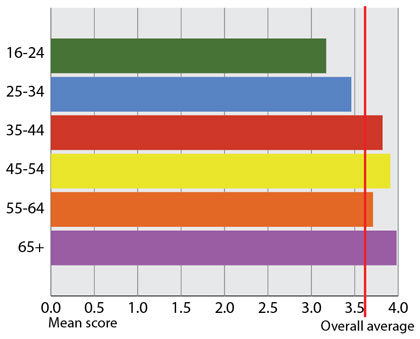 We expected distrust, but not as low as this.

Many people would argue that all these figures show that the old rules about brand building are redundant. We are now entering a whole new era of branding and we had better learn the rules of the new era quickly before our brands wither and die.

At the centre of the change are customers themselves. They are empowered, know how to complain, can find out the brutal truths and they read company actions and strategies like an open book. In fact, some of them are laid bare on Youtube.

Today’s customers look at companies from all angles; as consumers, potential employees and investors. They build up a picture of a brand through the 1,000s of ways they interact with them.

If you want to win in the new era you need to do three things:

Then look at your brand vision – is it rooted in the brutal truths, is it truly differentiating, have you really got different values to your competitors and a distinctive personality.

Look at the brand behaviours, the processes that enable things to happen – are they really aligned to delivering the vision?

Be hard on yourselves, it could save your brand, and if you do these three things your brand will thrive in the new era and you will deliver well beyond your expectations, trust me.

The survey was conducted by Ci Research using an online methodology. In total, they achieved 1,200 individual rating responses across 10 key locations throughout the UK.

For brands, it really is personality that counts

Reinventing marketing: Nothing must detract from building trust in your brand