The Financial Times has launched a spot encouraging readers to entrust the publication to decipher the utterances of world leaders in the face of a global recession and political uncertainty.

Created by The Brooklyn Brothers, “Lead without example” shows world leaders including Donald Trump and Vladimir Putin (as well as Tesla's billionaire owner Elon Musk) as they fluster their way through press conferences.

“If you’re feeling a bit lost right now, you’re in good company,” a narrator declares, before urging viewers to “steer confidently through crisis” with the Financial Times.

It was created by Simon Burnett, Kati Lopez, Ellie Turner and Hayley Smith (from the FT), with George Bryant and Michael Thomason (from The Brooklyn Brothers), and produced by Peep Films.

This forms the latest instalment of the FT’s “New agenda” brand positioning, which launched in October last year in a rallying cry to business leaders to help change the world.

“The FT equips readers to deal with a very complicated set of issues, which have to be mastered in business nowadays,” Finola McDonnell, chief marketing officer of the Financial Times, told Campaign.

“We've tried to evolve the campaign from its launch last September – which was basically saying for our readers 'the moment is here to be more responsible for business' – and lean more heavily into this leadership concept.”

She continued: “Our readership are influential people – they're decision-makers around the world, and this is a call to action for them to lead on.”

Launching today (14 September) across video-on-demand and social platforms and running throughout the next two months, the campaign culminates at the publication’s Global Boardroom event. This takes place from 11-13 November, and will feature discussions as to how the world is expected to respond to the various uncertainties affecting the global economy, including Brexit and the US presidential election.

In a bid to better communicate with readers over social issues, the FT has also launched a Climate Hub, as well as a Digital Dialogues platform, which encourages leaders in various sectors of the economy to talk about big issues affecting their particular sector.

McDonnell said: “OK, we're in unprecedented circumstances and there's no roadmap for how to come out of a global pandemic where we shook the world economy off and turned it back on again, but there's an opportunity to come back stronger and better; to think about what businesses looks like from here on in and whether readers can play your part in resolving social issues.”

Last year the FT reached one million paid readers and launched print campaign “The work is being rewritten daily”. 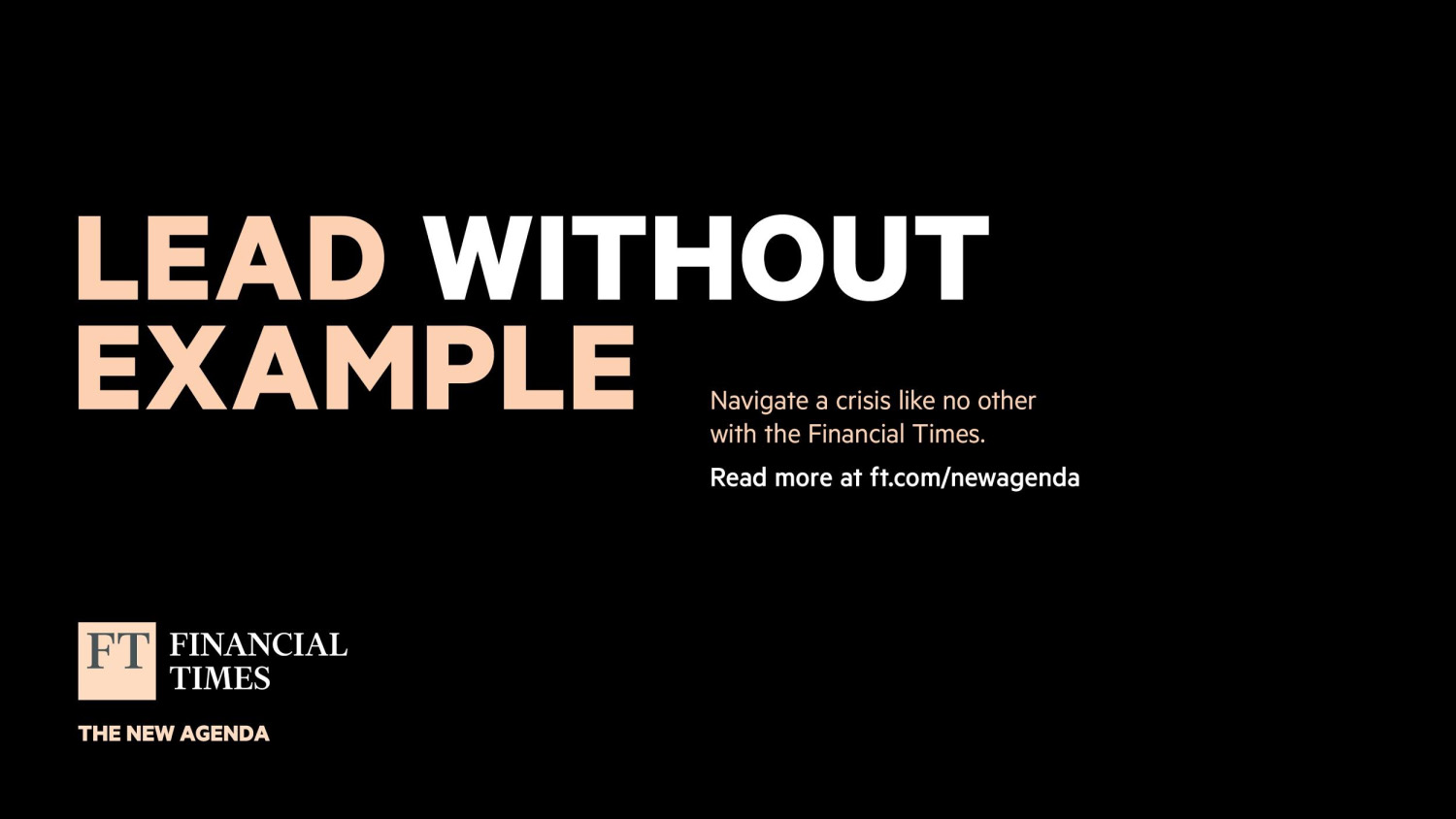 Although the paper has typically focused on out-of-home and print activity to support its brand, the coronavirus pandemic has prompted the title to think outside the box with its approach to communicating with the business-minded masses.

“We know that our demographic is walking around in Canary Wharf and Wall Street – we know where business people aggregate, but that's all gone away, of course," McDonnell said.

Instead, the brand has opted to use video-on-demand through platforms such as Hulu for the first time in its history, providing a unique opportunity for the brand to better interact with a younger demographic.

McDonnell continued: “Younger audiences are much more conversational, so we can get people thinking about leadership in a more sophisticated way than just giving them two or three ads on a printed billboard.

“Lockdown means we're speaking to people in their kitchens, so we've gone much more digital."

The Guardian also launched a new brand platform last year (23 September), introducing the slogan "Hope is power" in a bid to showcase the brand's dedication to purpose-led journalism.

But with businesses experiencing a shift towards brand purpose through the decades, McDonnell said that the FT’s previous tagline “World business in one place” – which she remarked was “perfect” in terms of what the title was providing its users – has since been scrapped as it “didn't take a point of view” on social issues affecting the world of business.

From this, the FT has adopted a “descriptive, utilitarian marketing approach”, which actively joins the cultural conversation about what modern business entails today.

“There's passion in news – it's not enough to just say it's fact,” McDonnell said.

“People have opinions, they have a point of view and we need to be able to capture the spirit of that to be relevant in 2020.”

She concluded: “We want to tell people it's OK not to know what to do – these are unprecedented circumstances and we're not suggesting that we have all the answers, but through our journalism and our community we're here to help you.”

Is Joe Biden really that far ahead?

Evening Standard to cut 33% of workforce

Global adspend slump expected to be less severe than 2009 crash