News International has launched an ad campaign for the News of the World, as it looks to ramp up awareness of the Sunday newspaper before it goes behind its proposed paywall next month.

The TV and outdoor campaign will launch today (27 September) and aims to promote the paper as Britain’s best-selling newspaper, ahead of plans to start charging readers for access to its digital content. The paper will charge users £1.99 for a four-week subscription, from October.

The TV ad, created by WCRS, which breaks on Wednesday and runs for three weeks, features the strapline "The big stories start here" to highlight the paper's reputation for breaking exclusive news.

The campaign will feature a selection of its biggest scoops, such as Chelsea footballer John Terry’s affair and Sarah Ferguson’s cash for access to Prince Andrew revelation.

The three TV executions will include "The Horse Whisperer", "Gotcha" and "Stakeout". Media planning and buying has been handled by Mindshare.

Barnaby Dawe, News of the World marketing director, said: "This campaign celebrates the News of the World's unparalleled reputation for delivering incredible revelations, week after week, year after year.

"It brings to life the passion, humour and excitement of the paper and will be a powerful tool in reminding readers why they love our brand." 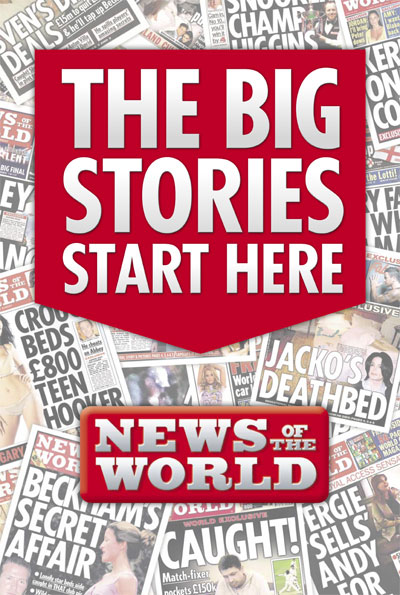 Jeremy Lee on Media: No news is not good news

News of the World to put up paywall in October