Nielsen, the global information and measurement company, has hailed the World Cup as key to a 10.6% recovery in the global advertising market last year.

The World Cup helped drive a second quarter increase of almost 13%, which was the fastest growing quarter.

Randall Beard, global head of Advertiser Solutions for The Nielsen Company, said: "The 2010 Fifa World Cup brought the attention of hundreds of millions of soccer fans, and not surprisingly, advertisers followed with significant spending."

It presented an excellent opportunity for advertisers to jump back into the market, revitalizing ad spend in multiple countries." 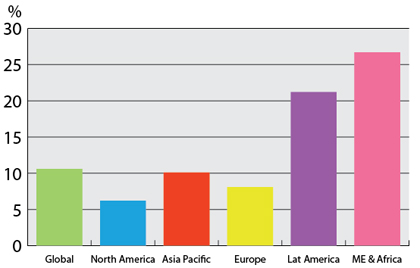 The US, the world's largest advertising market, had one of the slowest growth rates of 5.6% year-on-year, but is back in the black after advertising expenditure dropped 9% in 2009.

The only market to experience a decline in advertising in 2010 was the United Arab Emirates (-4.4%) while advertising remained flat in the economically challenged markets of Japan (+1.3%) and Spain (+0.4%).

In Asia Pacific, nine out of 13 markets enjoyed double-digit growth compared with the previous year, with strongest rebounds from India (+28.1%) and Taiwan (+19.1%).

Beard said: "Overall 23 out of 37 global markets posted double-digit ad growth last year in a clear indication that advertisers regained confidence to spend again after a weak 2009 where every region except for Asia Pacific posted declines."

In terms of brand categories, adspend for fast moving consumer goods increased by 14.6% in 2010.

Two of the hardest-hit sectors during the global downturn, automotive and finance, increased ad spend by 20.3% and 17.9% respectively. Six automotive companies were among the top 20 global advertisers in 2010.

In the UK, Beard said, the Olympics will have a similar impetus for driving advertising spend to the World Cup.

He said: "Advertisers are already thinking about how they’ll capitalise on next year's Olympic Games in London, which could prove to be as much an advertising event, as it is a sporting event." 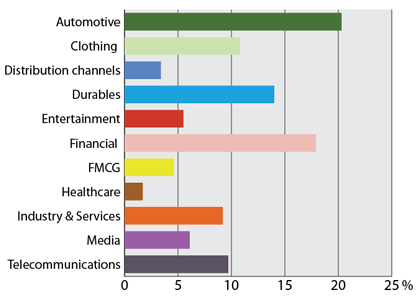 According to the report, all traditional advertising media types had spend increases in 2010.

Globally, television spend rebounded 13.1% and increased its share to 62% of all adspend, up from 60.6% the previous year.

Across the globe radio advertising rose 8.5%, followed by newspapers, which was up by 7%.

Magazines recorded the slowest growth of all media types at 4.9% globally, with the only double-digit growth being in Latin America where it rose by 14.9%. 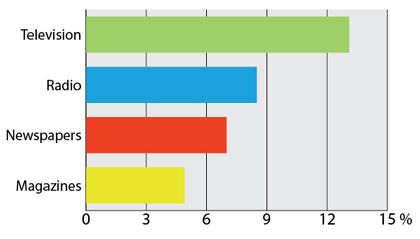