Mark Read wants WPP to win more clients in financial services, healthcare, telecoms and technology as he battles to turn around the group, particularly its ailing North America division. The WPP chief executive insisted in an interview with Campaign that he has taken the necessary steps to turn around the US operation but admitted "it will take time" to see an improvement.

"We need to be realistic about how long it will take," Read said, after reporting an 8.5% slump in net sales in North America in the first three months of 2019 – the group’s ninth quarter in a row of declining revenue in the region since Q1 2017 and its worst performance yet.

Read pointed out he has appointed new leaders at many of WPP’s North American agencies, representing about 75% of the business in the region, since September when he became CEO, following Sir Martin Sorrell’s exit.

"I do think when you talk to people in the business and to clients, the changes are having an impact," Read said.

He expects Q1 to be the worst quarter in North America and for the decline in net sales to improve as the year goes on.

Read played down the suggestion that London-based WPP is overly reliant on British leadership at a group level when the company generates 36% of revenues in North America.

He conceded "perhaps in North America we haven’t made as many acquisitions as we have in other markets" to drive growth. "Traditional" creative agencies are suffering the most and media "is not in decline" in the region, according to Read, who was adamant that greater client scrutiny of media-buying transparency had not contributed to any fall in revenue. 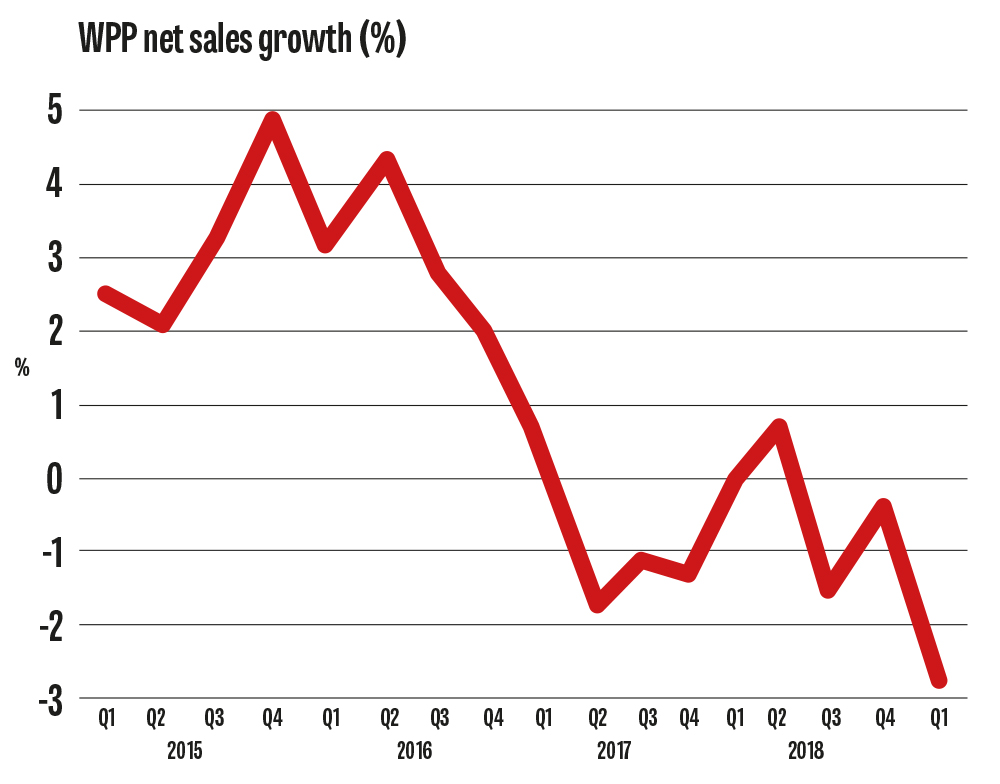 Read said WPP needs to "capture the growth" in new areas such as commerce, experience and technology, "which is where clients are shifting their budgets", and he would like to increase the number of clients in key sectors: "We could have stronger business in financial services, healthcare, telecoms and technology."

WPP’s annual report, which was published in April, warned that the company faces "new competition" from management consultants and rated them a bigger threat than clients in-housing marketing services or tech giants disintermediating agencies.

Read was awarded £3.7m in pay and bonuses last year, including a one-off share award worth £1.5m when he was joint chief operating officer.

He was paid £2.2m, which included £965,000 in salary and bonus for his four months as chief executive and a bonus of £1.25m for his time running Wunderman and as joint COO earlier in the year.

Read did not receive any of the £1.5m share award in 2018. It is due to vest in three instalments over three years, starting in May 2019.

'Sorrell? He's the reason WPP's in the mess it is today'

Mark Read: CMOs have become too much like chief communications officers

Facebook and Newsworks clash over solutions to advertising bombardment

Why are agencies failing to grow in line with the ad market?

WPP's Mark Read awarded more than £3.7m in pay and bonuses across 2018

Adland's biggest acquisitions of the past 35 years