There is a central paradox at the heart of a handbag: the less useful it is, the more necessary it becomes. This contradiction transforms an ordinary handbag into an object of adoration. Once its primary function of carrying objects is no longer so important, there is an empty space to communicate a bigger story. The bag becomes what semioticians call a cultural symbol, an artefact that tells an underlying story about the people & society of an era.

But when does the need for this accessory turn into want, to the point where, as fashion designer Tom Ford has famously put it, "You gotta have it or you’ll die?"

To answer this conundrum, we will review four contemporary handbags: the clutch bag, hobo bag, tote bag and man bag, and in doing so explore how and why a handbag is a primary storytelling device for any consumer and fashion brand.

This bag gained popularity in the 1920s, an era that prided itself on the rejection of decoration and celebrated functionalism. The clutch bag with its uncluttered, rectangular minimalist design, rose as the embodiment of modernity and progress.

However, although the clutch bag looks functional, it isn’t practical at all. Firstly, it needs to be carried in the hand or gripped under the shoulder and it is too small to be practical. Yet, its appearance was the result of the modernist aesthetic of art deco – all symmetry and angles, as well as celebrations of industrial power and certainty, not Beaux Arts excess.

It didn’t matter that the clutch bag wasn’t practical, what mattered more was that it communicated a story of speed, progress and functionalism. The owner carried "modernity" in their hands not just their lipstick.

And where is the clutch bag in 2013? Fashion magazines recently heralded the "Clote bag" as the next "It Bag" for Spring 2013. This is a fusion of clutch and tote bags, exemplified by Mulberry’s Willow bag.

In describing the bag, Mulberry’s creative director Emma Hill has spoken of the power of Transformer toys and how we all wish to "transform something into something else". Moreover, in a time of austerity, the £1,250 Willow bag successfully communicates adaptability and sensibility without it being a sensible choice at all. It says you can enjoy the speed and progress of more affluent decades (signalled by the clutch bag) but also be thrifty and sensible (connoted by the tote bag - see below). Mulberry have powerfully modernized the essential modernist handbag making it relevant for 21st hybrid living.

While the archetypal clutch bag is too small to be practical, the hobo bag is the exact opposite. It is oversized and slouchy, designed to be worn over the shoulder.

The trend for oversized bags emerged in the 2000s as a response to the obsession with skinny jeans that came to replace the baggy jeans of the 1990s. The outlandishly big bags remained the only zone for broad self-expression, as every other item of clothing was shrinking.

Both Longchamp (Kate Moss , 2005) and Jill Stuart (Lindsey Lohan, 2007) featured handbag campaigns in which the model was topless, suggesting that clothes were becoming redundant and that self-expression was concentrated entirely on the bag. 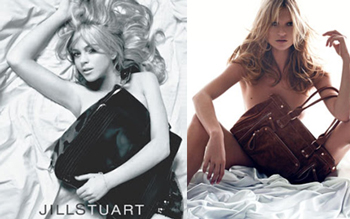 The magic of this bag lies in its name - "hobo".  A "hobo" is a homeless worker who wanders, a migratory worker, seeking restless adventure in place of stifling social conformity (think Jack Kerouac). Gaining huge popularity in the 2000s, this oversized bag is also a metaphor for an increasingly connected, globalized world where our perception of "home" is rapidly changing, and in which everything is carried with us at all times. In this way the rise of the hobo bag mirrors the integration of contemporary technology (think iPad), in which everything important converges into a single space.

The term "tote" means to carry, and at first glance, these bags are nothing more than carrying devices. Simple, large, open with two parallel handles and without any buttons or zippers. Their material is likewise understated, as they are often made from recycled or minimally processed natural fibers. It is no wonder then, that this bag reached high popularity during the 60s hippy movement when bags where purposely unstructured, easily customizable and overall unisex. 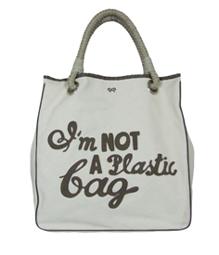 With rising awareness of and need for environmental sustainability, the tote bag had a revival as designer Anya Hindmarch introduced the "I’m not a plastic bag", tote bag in 2007.

Unlike a courier bag, backpack or laptop bag, the man bag is typically not big enough to fit a laptop in, yet not small enough to fit in a pocket. It is impractical yet desirable and its appeal depends on how successfully it communicates utility.

In a Guardian commentary piece A bag for real men (2011), Andrew Martin wondered whether man bag owners actually go into a shop looking specifically for a "man bag". According to a salesman in Crumpler, men normally ask for a "DJ bag" or "courier bag" even if what they’re actually after is a man bag. 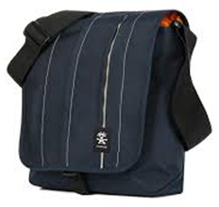 This follows the historical trend of man bags being qualified by function, rather than gender or appearance, such as "hunting bag," "fishing bag" as well as "briefcase" where "brief" originally referred to documents.

Therefore, successful man bags will typically feature distressed leather or other rugged materials that make it look used and add a hunting quality to it. Just like the other bags we reviewed, the man bag is more than a bag – it becomes a symbol of masculinity, the owner a bearer of war scars and doer of heroic deeds.

At the same time, celebrities such as David Beckham and Christiano Ronaldo have been spotted with LV and Gucci man bags, which curiously do not reflect utility, but look a lot like female clutch bags. In this case, their purpose is not to communicate masculinity - since their carriers are well-known footballers, their need for additional codes of machismo is rendered obsolete, their chosen career is enough. Their purpose, instead, is to establish a male peacock identity and communicate "superior celebrity" for whom normal rules don’t apply, rather than "ordinary man" for whom they do.

The four bags we reviewed so far have one thing in common - they fit people of all ages and sizes. Yet at the same time, the underlying stories they tell couldn’t be more different. Therefore, it is the relevance of these stories to contemporary culture that eventually separates out the successful fashion brand from the rest.

In this vein, perhaps we might one day witness a future when the bags we carry are entirely empty, transformed into an object designed purely to communicate an idea, not provide a practical purpose.