The Grim Reaper stood outside ITV's annual meeting to greet shareholders, which seemed harsh even on a day when the broadcaster said it was facing a 9% drop in ad revenues in the first half of the year.

The man in fancy dress was one of two union protestors unhappy about ITV’s plans to scale back the London Studios on the South Bank as part of the company’s redevelopment of its headquarters.

There was no gallows humour inside the AGM in Westminster where the mood was jolly as Adam Crozier, the departing chief executive, received two rounds of applause for his seven-year tenure during which he sent profits soaring, invested in international programme production and reduced dependence on advertising.

"I’m free – I’m out," he joked to Campaign with a giant grin as he walked into the AGM.

His departure, announced last week, means he will be gone by 30 June, which some observers think is hasty.

Crozier’s counterpart at Channel 4, David Abraham, has given his employer more time to manage his exit.

"Nothing’s gone wrong" with the ITV succession, chairman Sir Peter Bazalgette insisted to shareholders, peering over glasses halfway down the bridge of his nose in headmasterly fashion. 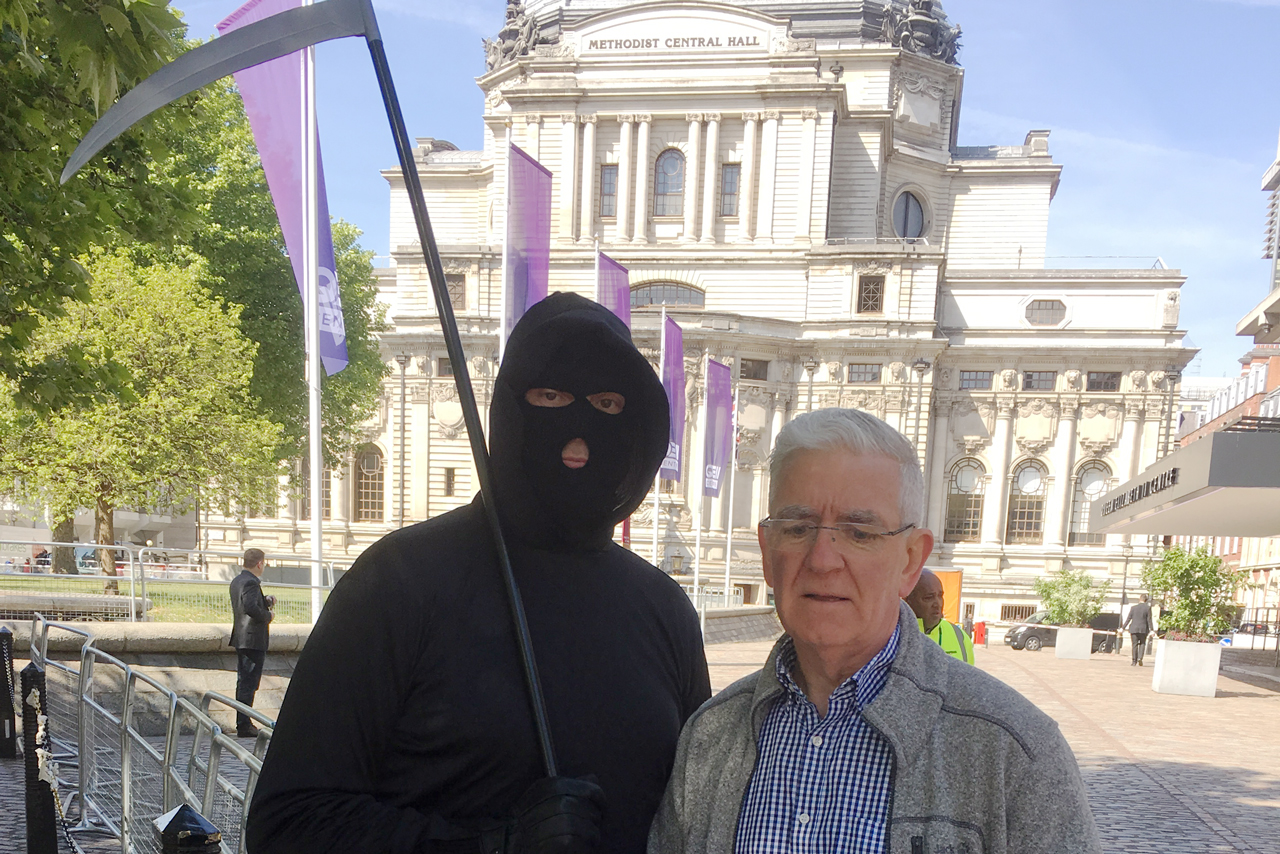 "Baz", presiding over his first AGM, said he did not agree with the suggestion from one private shareholder that it was "amazing" that a new chief executive hadn’t been lined up when Crozier announced that he was going.

Sir Peter retorted that Crozier had discussed his intention to leave last year and succession planning was "well underway".

He added that ITV "couldn’t start searching" for a successor until Crozier had made a formal decision to go and then the company had to tell the stock market.

Still, the fact remains "Baz" will have to be executive chairman from 1 July on a temporary basis. Time will tell how smooth the succession will be.

One possible internal candidate, Kevin Lygo, director of television, was in the audience but has given nothing away.

Most investors’ questions were "soft ball" inquiries about getting to watch more of their favourite shows from evening horse-racing to day-time drama.

The London Studios is being scaled back and some jobs will be lost because, Sir Peter explained, the production business makes more money from creating and distributing shows, rather than owning physical studio space.

There was a flicker of interest when one small shareholder asked about Liberty Global’s possible takeover intentions.

Crozier said the owner of Virgin Media, which owns just shy of 10%, has been "remarkably supportive" and "that’s how we think of them at the moment".

He leaves ITV in decent health after rebalancing the business.

ITV Studios, which has produced shows such as Victoria and Shetland, now generates half of its revenues outside the UK and is making shows for new players such as Netflix, he says.

Still, there’s a sense that Crozier is leaving at a rather better time for him than for the company.

The lurch downwards in TV ad revenues in the past 12 months isn’t just about Brexit uncertainty.

The falling pound has forced international advertisers to cut spend.

The supermarket price wars and tough times for banks are also to blame, according to the ITV camp.

The doom-mongers who wrote off broadcasters during the 2008-2009 recession were proven wrong as the TV ad downturn proved cyclical, not structural.

But the next seven years for British broadcasters could be a lot harder than the previous seven years.

No wonder Crozier felt it was time, in the style of I’m A Celebrity, to say, Get me out of here.

Don’t expect him to rest easy. Crozier, who previously ran Saatchi & Saatchi, the Football Association and Royal Mail, sounds like he’s hungry for new roles in other parts of the corporate jungle.

ITV has its work cut out to find another big beast.

Crozier did a good job for ITV, but his exit leaves questions

Broadchurch and BGT pull in record viewers for ITV

Are ITV's results a canary in the coal mine for TV ad market?

TV's new leaders must prepare for tough fight ahead