A PlayStation Move poster has been banned by the Advertising Standards Authority (ASA) after complaints that it was offensive, irresponsible and inappropriate for public display.

The poster for the campaign showed a man in three different poses and throwing punches, appearing closer to the audience in each shot.

The final pose showed the man holding a computer character in a headlock and raising his arm, suggesting he was about to punch his opponent in the face.

The text underneath read: "Move into the fight £34.99 RRP! PlayStation move, the game is just the start…"

The ad received eight complaints that the imagery showed graphic violence, which could be seen as encouraging violent behaviour and deeming it unsuitable for children.

Two of the complainants highlighted that the game player was white and the computer character being tackled was black, and said the ad might be seen to condone racist violence.

Sony Computer Entertainment UK protested that the poster was supposed to advertise the controller, not the game. Sony also said it had "taken steps to ensure that the images were not graphic" and that they did not target or feature children within them.

However, the advertising watchdog upheld complaints that the images in the ad were likely to "condone or encourage violent behaviour," which could cause serious offence to the viewing public and that it was unsuitable for children.

It did not accept the complaint that the images were depicting a racist attack. The ASA said that while the men featured had "slightly different skin tones," the ad was unlikely to be seen as condoning racist violence.

The ad has been banned, and must not appear in its current form again. 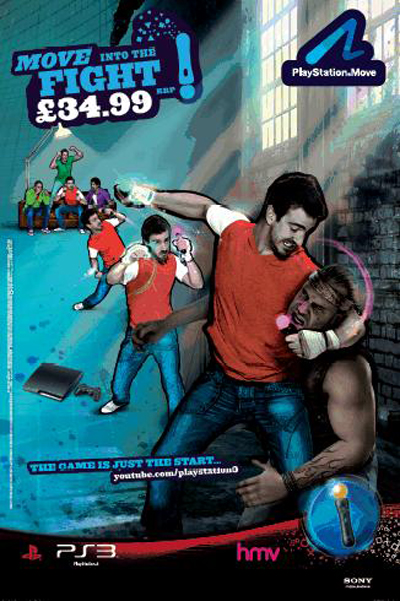