Agency Ruby J Events has revealed its work with NBC Universal during the 2012 Olympic Games has helped the company to double turnover and profit in the last 12 months.

The Hertfordshire-based company, set up by Joanna Greenfield and Lucie Robins in 2009, told Event it was up against two other agencies in a pitch for the contract to create a lounge-type environment for the US broadcaster at The Savoy hotel in London.

Greenfield said: "We were lucky to pitch for that contract and our relationship with the venue, which put us forward for this work, was a major factor in us landing the deal."

During the 17 days in which NBC Universal took over the West End hotel, Ruby J Events was tasked with creating all the corporate hospitality for the company at the venue. The duo also organised three events for the US broadcaster at Battersea Power Station, as well as a series of private dinners. 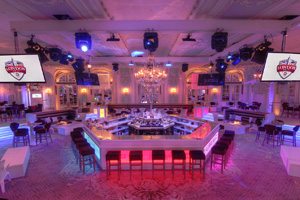 "Our work for NBC Universal has resulted us in securing a new but similar contract with the company for the Sochi 2014 Winter Olympics next February," Greenfield said."

In the last year the pair have also worked on events for Adidas, global insurance broker Willis and the Mayor's Fund for London’s global party launch, which was a black tie dinner at The Savoy in June.

Greenfield said plans for the business in 2014 will include hiring a new member of staff. "2013 was a funny year for us, it was busy but not in comparison to the previous three years. However, next year is already looking eventful."

How has your business performed in the last 12 months? Comment below to let us know.

Want to get involved with the Women in Events campaign? Email associate editor Rachel Bull to find out how.

Survey: Women in the event industry