For this week's US presidential race, encouraging young voters to actually cast their vote was key, Isaac Silverglate writes.

Share
Right now, here in the US, Tuesday’s election is still on everyone’s mind. Some people in adland have been thinking: "I’m a clever member of the advertising community and I care about the future of the nation. So, surely, I can do something that will make an impact?" Well, as a member of adland, I share this enthusiasm. But when it comes to truly making that impact on a presidential election, things get a bit tricky…

First, the biggest influence in presidential elections from an advertising point of view is still TV – especially since the Supreme Court has taken the handcuffs off when it comes to the size of campaign contributions, allowing
candidates to buy more media than ever before. Obviously, social media is still increasing in importance, as seen in 2008 when Barack Obama used it to such great effect, but broadcast still reigns when it comes to winning hearts, minds and votes.

And we’re not talking about the kind of TV that gets creatives excited. We’re talking blunt weapon stuff. Unimaginatively produced (unless you consider bending the facts imaginative) and often negative in tone. Like virtually all political advertising, presidential TV ads are more about presenting facts in a certain light than doing anything creative with them. It’s the hard sell.

So where does that leave well-meaning ad people? People who want to create something effective, but also something that they could be proud of – and, by the way, not spending millions of dollars on production and media would be nice, too. After all, this is pro bono.

Well, in every election year there are a few agency-produced pieces out there, either TV spots or web films, and this year is no different. They are usually leagues more creative than the typical election ads (again, low bar). Typically, they
feature a celebrity, or a bunch of celebrities, to attract more eyeballs. Maybe it’s a celebrity doing something kinda "edgy" in an attempt to go viral. Some are quite entertaining or provocative and do, in fact, go viral and rack up online hits. But how effective are they?

As always in advertising, it depends on how you define "effective". Effective might mean getting your message out there and hoping it gets passed around the internet and sparks conversation. But if it means feeling you actually made an impact on the election, that’s tough when campaign spending is in the hundreds of millions. How could an agency-produced TV spot or web video make a dent? 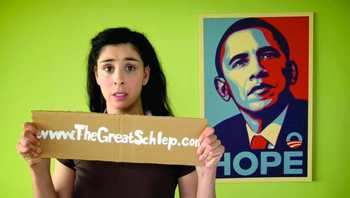 One way would be to do what’s become an ad cliché, and try to start a movement and get people inspired and involved in an idea that calls for more action than simply sitting and consuming content. I am still proud to have been part of the "Great Schlep" campaign for Obama in 2008. That campaign was, in fact, led by an edgy viral video featuring a celebrity, the amazing Sarah Silverman. And, yes, we racked up the online hits. But the campaign did not stop at a video. Online, it attempted to mobilise young pro-Obama Jews to visit, call or e-mail their grandparents in Florida and educate them about Obama, so they would vote for him (elderly Jewish voters are a huge voting block in south Florida, and nothing makes them happier than a visit from the grandkids).

We succeeded in mobilising young pro-Obama advocates and, you could argue, actually made an impact when Obama narrowly won Florida. So one way an agency can make an impact would be to propose something actionable, inspiring others to advocate for a cause.

This year, our agency is trying to address the youth vote, and why so few people aged 18-24 participate in elections. We teamed up with the Academy Award-winning film-maker Errol Morris to produce a series of short films, all featuring young people giving their genuine, personal and often quirky reasons for voting. The campaign asks other young people to pledge to vote on Facebook, and let the world know why they are voting (some people in the films talk about voting to cancel out the votes of people they don’t like – an unusual but emotionally satisfying reason).

So, for us ad folk who want to do something good and lend our talents to the political process, there seems to be hope. After all, every day we are tasked with taking ever-shrinking budgets and creating work that breaks through the clutter and changes people’s behaviour. This time, it’s not just selling make-up or a new pair of running shoes, but the fate of the free world. So, no pressure…

I am Isaac Silverglate, the co-executive creative director of CHI & Partners NY and I approve this message. This message is funded by The Johnny Hornby Super PAC.