At least a third of children as young as seven years old are using TikTok, despite the platform requiring users to be at least 13 years old without parental supervision.

A snap poll by Beano Brain, an insights consultancy that is part of The Beano publisher Beano Studios, found 34% of seven-year-olds claim to have used TikTok “in the past few weeks”. The number rises to 51% for 11-year-olds and 64% for 14-year-olds.

The poll also shows that Instagram Reels, the new Instagram product widely seen as a copycat of the rapidly growing video sharing app, is already being adopted by a significant amount of "tweens". Nearly one in five (18%) of seven-year-olds claim to have been using Instagram Reels within the past few weeks – the number rises marginally for older adolescents (26% for 13-year-olds, for example). 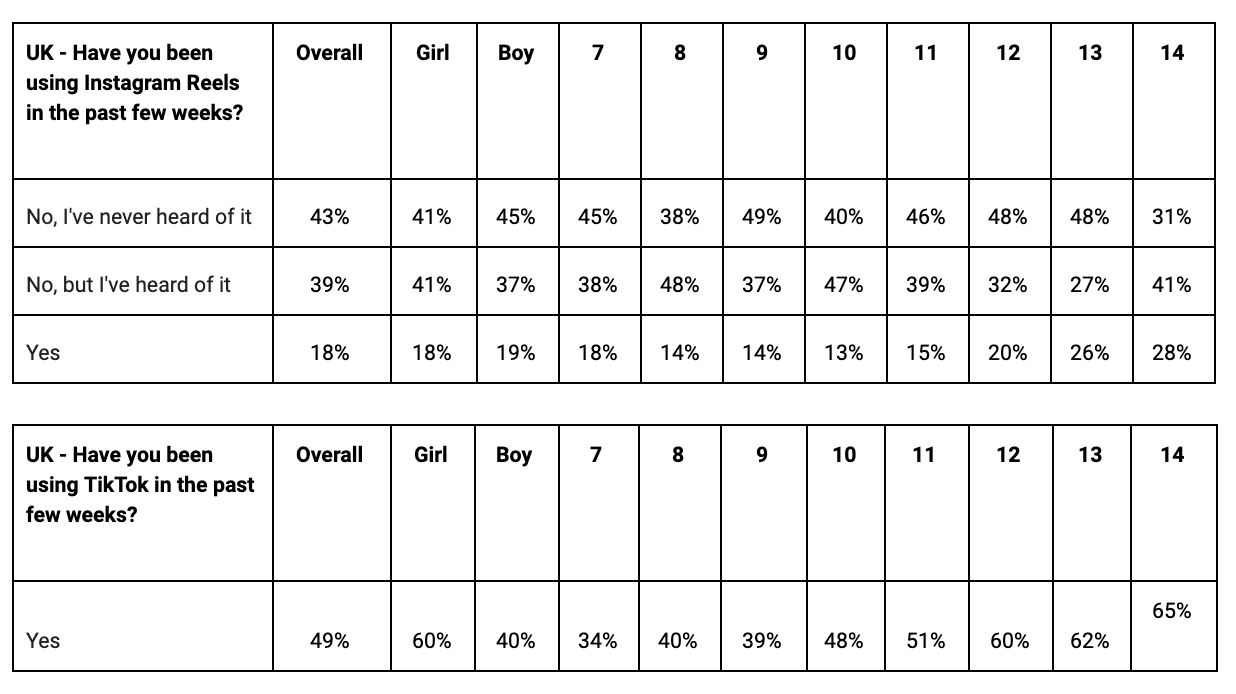 TikTok is highly popular with teens and tweens. A survey by Ofcom found that around one in eight (13%) aged between 12 and 15 used the platform last year.

In April TikTok banned its youngest users from using direct messaging, with only those aged 16 and above now able to use the feature. The short-form video and social media platform, owned by Chinese company ByteDance, has tried to made the platform more child-safe after it emerged last year that child predators could target children who use TikTok. It has also updated its virtual gifting policies, introduced a family safety mode and launched a Trust and Safety Hub in Dublin.

Beano Brain’s researchers also interviewed some of the older children, many of whom were sceptical about Instagram Reels, which was launched by Facebook-owned Instagram earlier this month.

Selina, 14, said: “I don’t think TikTok should be worried because it isn’t something that you’re looking for when you go on to Instagram. If people wanted to see that type of thing, they would go to TikTok.”

Meanwhile, 15-year-old Ace said: “To be honest I'd never heard of it before today when I had to look for it. Reels feels like a knock-off version of TikTok because it uses the same swipe 30-second video format."

The poll surveyed 1,601 children between Friday 21 August and yesterday (24 August).

Helenor Gilmour, director of insight at Beano Brain, added: “It’s early days but from speaking to our teen panel this week it’s clear that Reels hasn’t captured their imagination – yet. Over the last few years, we’ve seen teens (and kids) operate as hacking hunter-gatherers with tech. Often they prefer separate apps and platforms with specialist purposes vs a 'one-stop shop'."

An inside look at how TikTok is cosying up to agencies

Imagining a world without TikTok

Microsoft deal to buy TikTok in US 'moving quickly'