Innocent Drinks has relaunched its brand with a campaign touting its commitment to the environment and encouraging people to take action to help the planet.

The “Little drinks, big dreams” platform launches with a TV ad, created by Mother London, about characters who are “messing up the planet” – and the unexpected hero who helps them change course.

The film features simple animations, created in collaboration with artist and illustrator Matt Blease, and is set to an ironically cheery song about facing the “impending doom” of environmental destruction.

“We’re messing up the planet, we’re messing up real good, and filling up our bodies with more beige food than we should,” the revellers sing as they unwittingly sail in a boat towards a giant waterfall – a metaphor for planetary peril.

But then one passenger, a furry otter, steps in and stops them from falling off the cliff. “Whoa, whoa, what are we doing?” the creature asks, before grabbing the guitar and changing the tune to lyrics about “fixing up the planet”.

The scene ends with the people gathered around the otter in a park, joining in on the song: “If we’re looking after nature, she’ll be looking after me.”

The film was directed by Alex Grigg through Blinkink. It is accompanied by posters and a new visual identity for the brand. 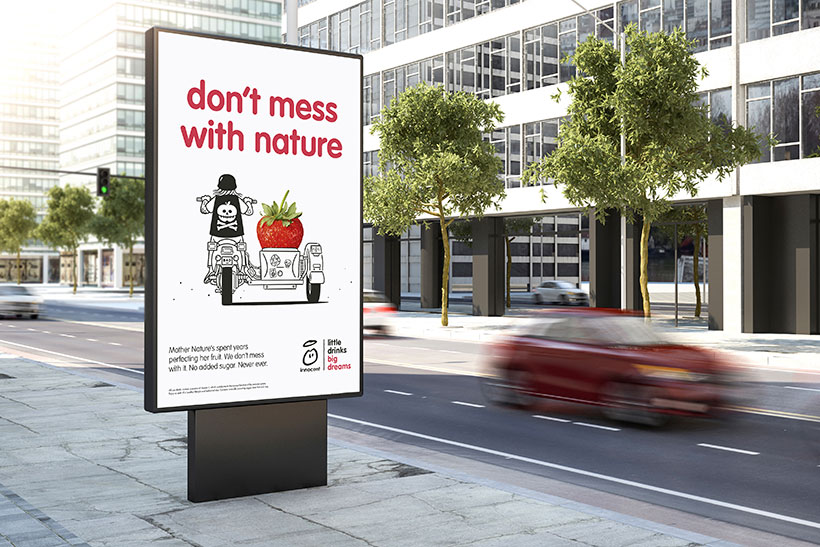 The campaign sets out how the drinks brand is pursuing its “big dreams” of helping people and the planet. It promotes the company’s initiatives, such as giving 10% of profits to charity to combat world hunger, committing to being fully carbon neutral before 2030, safeguarding biodiversity across thousands of hectares of farmland, and never adding sugar to its products.

“Little drinks, big dreams” aims to inspire people to take their own small steps to help the planet and show how collective action can lead to positive change. 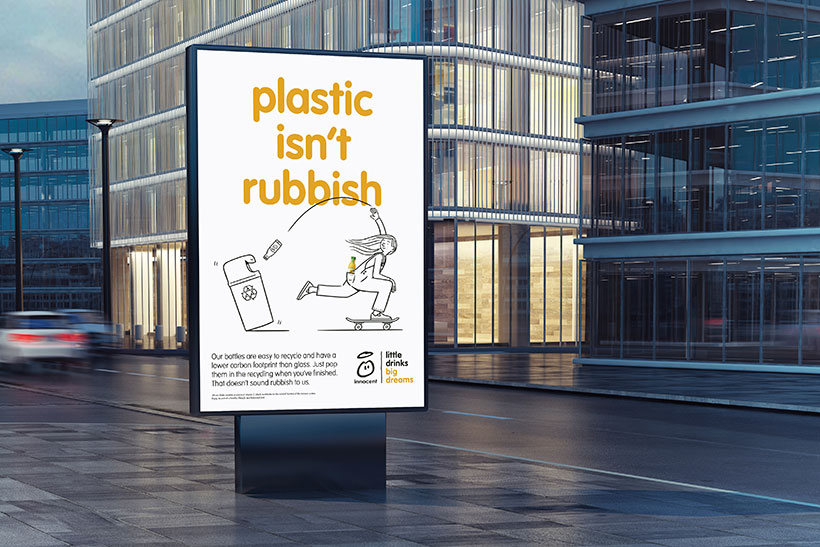 Douglas Lamont, chief executive of Innocent Drinks, said: “The launch of Innocent’s ‘Little drinks, big dreams’... gives us a platform to talk about the many fantastic initiatives within the company – from carbon reduction, to recycling, sustainable farming and helping people and communities – sharing information and what we’ve learnt along the way and hopefully inspiring others.

“This year is shaping up to be a major opportunity for UK businesses to look beyond the pandemic towards the sort of world we want for ourselves and future generations. Innocent is determined to play its part in that conversation.”

Kirsty Hunter, group marketing director, added: “Since we launched in 1998, we’ve believed in doing business the right way. And we know our drinkers are just like us. They’re optimists who believe that collective action can help our planet and communities thrive.

“This year we wanted to continue to inspire people to take those small actions that can make a big difference. At a time where our world is facing so many challenges, it felt like the right time to shout about what we do. 'Little drinks, big dreams' reminds audiences that they too can be recycling activists and climate changers alongside us. By talking about our products and our mission as one, we hope we can raise a smile and spark action, no matter how small.”