It doesn't matter. The Clear Channel boss reckoned the term perfectly described the predicament the world finds itself in – still in a catastrophic pandemic but slightly wiser than before March’s lockdown.

Cochrane explained: “It describes exactly what the current times are. It’s like troublesome but turbulent. It’s up and down and difficult all at the same time.”

Cochrane was speaking during a keynote presentation at Campaign’s Outdoor Media Summit, sponsored by Clear Channel. In his address, delivered remotely from his Ireland home, he discussed the past few months, the coming times and some of the lessons he has learned.

Non-prescriptive purpose
One of the ideas that caught his imagination during the periods of reflection was “agile long-termism”. He explained: “In the long term you must have a purpose, an organising principle, it’s your why are you doing something, what’s the reason for what you’re doing?

“That’s the long term bit. But how you react in the short term and how you organise yourself to get there – that should be as agile as can be. It shouldn’t be prescriptive, you shouldn’t tell everybody how you’re going to get to that goal.”

In early lockdown at his family home of 300 years, Cochrane found a 12-inch case full of letters. They were replies to a letter his great grandfather had sent out in December 1939, informing friends, family and acquaintances that his wife had died and that he had transformed part of the house into a hotel, urging them to share an accompanying brochure to drum up some hospitality business.

Cochrane said that his great grandfather’s grasp of advertising wasn't great, that rolling a piece of direct marketing into a letter informing recipients of the death of a friend and just three months into World War II, was perhaps not the most perfect strategy.

But one reply particularly stood out: “I am afraid people will wish to remain at home during these troubulous times.”

“Finding this letter 80 years on, right at the start of lockdown of a global pandemic, which for us was an unprecedented moment, makes you think about what will change now, how we’ll deal with it and what we should do,” Cochrane said.

Tech is our friend
The next realisation that struck Cochrane was that technology was a force for good despite his previous ambivalence: “Suddenly you’re using things like Zoom and Teams, working in a completely different way and the speed at which we all got used to that was incredibly impressive.

“It moved us on faster than we could ever have thought. I don’t think that could have happened if we hadn’t had this [pandemic]. We wouldn’t have had that shift in the ability to work flexibly.”

Technology also helped Clear Channel to be “super flexible” with advertisers on terms and conditions, allowing them to change creative quickly, enabling Clear Channel to put in place systems that measure audiences in the street “right now”, a solution manifest in its September-launched audience insights tool, Radar and RadarView.

Special position, special responsibly
Cochrane thought about Clear Channel’s, and the broader outdoor industry’s, role in the community and its support of various laudable initiatives. “For OOH, that’s creating the future of media with a platform for brands and a platform for good."

Cochrane stressed the power of the outdoor medium, "the trusty poster”, a point illustrated by the myriad news stories about the pandemic that carried header images of outdoor sites with Covid-19 messages. The poster is a most trusted media, he argued.

He discussed the outdoor industry’s support of Black British Network founder Cephas Williams’ “Letter to Zion” (pictured below) written following the killing of George Floyd. OOH has supported the campaign to the tune of more than £1m. 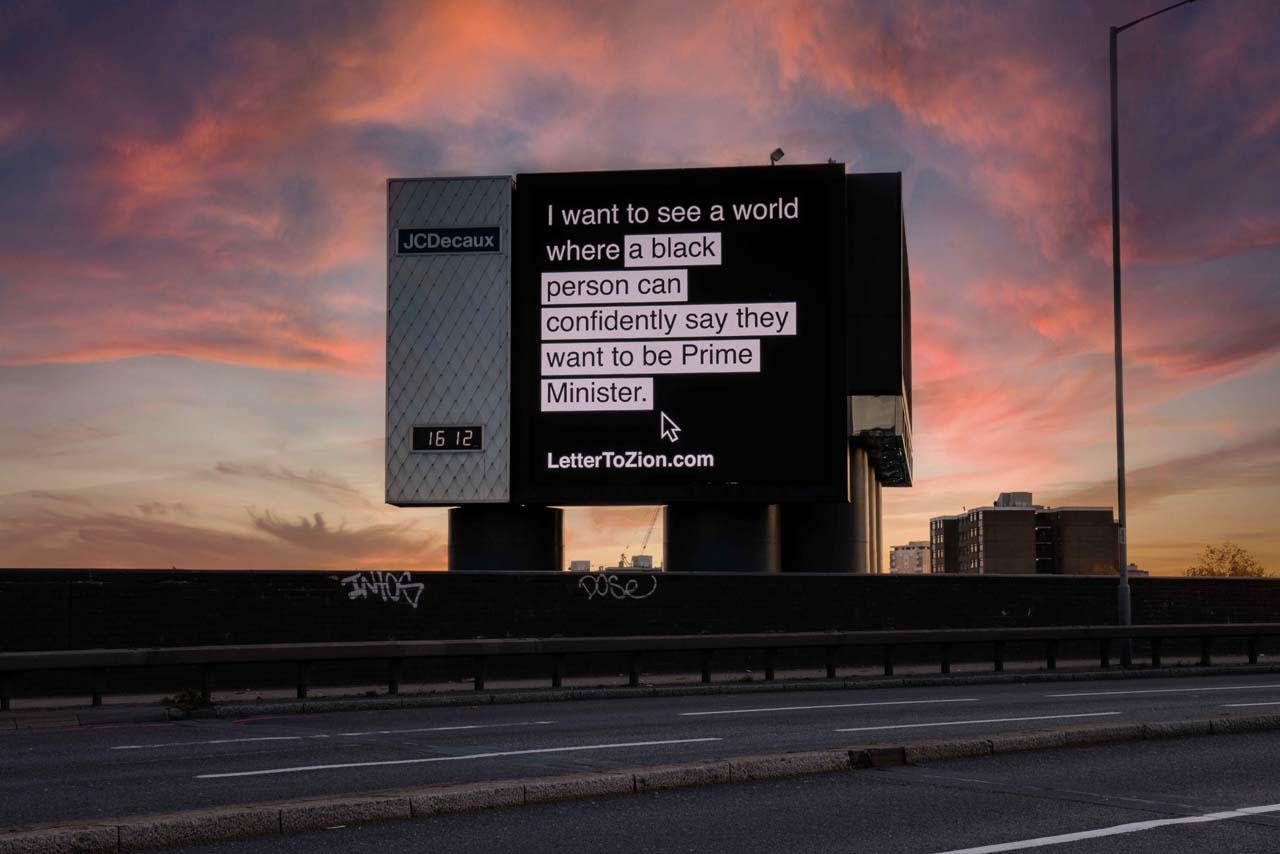 And he described Clear Channel’s and the outdoor industry’s investment into the country’s infrastructure, with around 50p of every pound in outdoor revenues going back into funding transport infrastructure, councils, maintaining and cleaning bus shelters, and more.

Fighting hard for every penny
“This is important in positioning us as an industry,” Cochrane said. “As we go into a future where we’re fighting for every penny and possibly face a recession, it’s important we have our story clear on why we’re investing in out-of-home.

“It’s a differentiator. We have no editorial; it’s a clear message. We can help change the narrative, we have the trusted poster, but how we build things, how we do things, how we help people understand what it is that we’re doing and how we’re contributing… It is incredibly important.

“All those things will help us through these troubulous times.”

The state of play

Clear Channel, like the rest of the ad industry – like the majority of the commercial world – has had a tough time. Revenues in Europe were down 62% year-on-year in the second quarter of 2020, as lockdown led to literal inactivity – the streets and stations, where Clear Channel’s media resides, deserted. “It was as big a shock to revenue as anyone has ever seen in their lifetime in the media world,” Cochrane said.

But Q3 bounced back particularly for roadside even if Q4 is "a bit lumpy". He has ideas about 2021 but also honesty: no one knows what will happen: “When you go through times like this, what do you learn from it? What do you take from it and how do you react?”