Vicki Maguire, deputy executive creative director at Grey London, has spoken to Campaign about how she got into advertising and how she came to own a sweetshop. 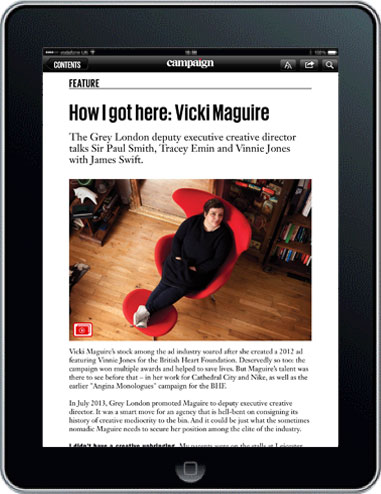 Download our iPad app now from the App Store and access the edition this evening as part of your Campaign Premium subscription.

Maguire, who owns and runs the shop in the East End of London, cites Paul Smith as her biggest career inspiration.

She said: "I studied fashion and I got to college and found I couldn't draw."

Smith told her not to panic and reassured her that her ideas could be written down instead.

She added: "He always said he's an okay designer and an okay businessman, but you needed to be both."

Maguire also talks about balancing her career in advertising with her shop.

"I've never just seen myself as an advertising creative," she said. "My nan had a sweetshop in Leicester...and I missed it".

Maguire, who created the 'Vinnie' work for the British Heart Foundation, said she did not have a creative upbringing and has been in retail since the age of 13, with a market stall selling second-hand clothes.

The full profile and three-minute video is available exclusively in the 6 January iPad edition.

How I got here: Vicki Maguire

Deadline extended for Women of Tomorrow