Original campaign was created by WPP.

The original ad, created by WPP, took inspiration from the Italian tradition of La Passeggiata, an evening stroll used to bring friends and family on to the streets of Italy's towns and cities to socialise.

First launched in July 2019, the work was created by Juliet McLaren and Dave Newbold, and directed by Jake Nava through Cherry Films.

The new version was created and produced by Trouble Maker and reuses the footage from the previous spot, accompanied by a new voiceover and soundtrack.

While the original focuses on the varied social interacions of La Passeggiata, "Walk with us" discusses the small things that we may have taken for granted before Covid-19, from sauntering through the streets to socialising with others, ending with a call for beer fans to "walk together" with Peroni as Britain’s hospitality sector begins to reopen.

"Taking the ritual of La Passeggiata and using it as a metaphor for how people will return you to a version of the future with hope and optimism is the right way forward for us. This crucial message about celebration of the little things – which actually is a real skill of Italians – is now much stronger than what it originally was."

Peroni had planned to shoot a brand new campaign, Rule said, but circumstances surrounding Covid-19 forced the brand into adopting a different approach. 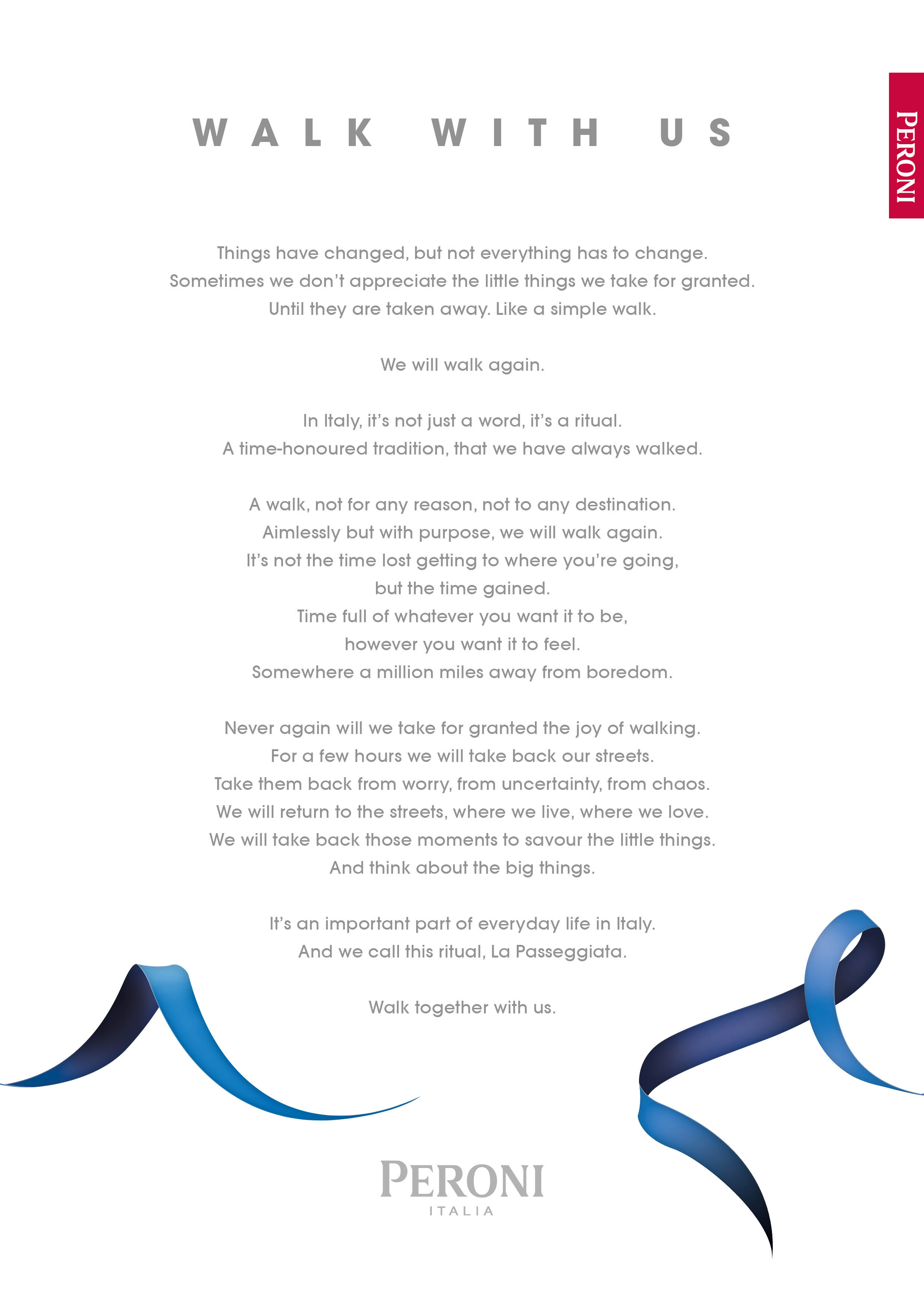 The film is accompanied by a press execution featuring a letter from the brand reassuring Brits that "we will walk again". It is running in The Guardian, The Times, The Observer and i. The campaign also includes radio, out-of-home and social media activity.

"Things have changed, but not everything has to change," the letter begins, before calling on Peroni fans to "take back our streets" and "savour the little things" by engaging in Italy’s contemplative tradition.

Rule continued: "A lot of the rituals of life have changed, so the notion of a letter felt like it was in keeping with a celebration of the little things.

"Physically writing to our consumers felt like a manifesto for this period and that is exactly what the ‘Walk with us’ sentiment is trying to convey."

House of Peroni launches across Europe with scented experience