Procter & Gamble has succeeded in getting the ad watchdog to ban a number of ads for rival Unilever's Persil Small & Mighty product for being misleading.

P&G, which owns laundry brand Ariel, challenged whether claims made in poster and press ads that Persil Small & Mighty gave "unbeatable results even in 30 minutes" could be substantiated.

It also took issue with the claim in a TV ad that stated: "New Persil Small & Mighty is unbeatable on stains like blood and mud, even in 30 minutes".

The ads were created by Bartle Bogle Hegarty.

Unilever supplied the Advertising Standards Authority (ASA) with the results of its tests, which compared Persil Small & Mighty with the top 80% of competitor biological liquid and gel detergents available on the UK market.

The ASA ruled the ads were misleading because they did not make clear that the "unbeatable" claim was being made only in comparison to other liquid and gel detergent products, and consumers were likely to interpret it as a comparison against all products, including powders and tablets.

The ASA told Unilever the ads must not appear again in their current form and to ensure it held adequate substantiation for future claims. 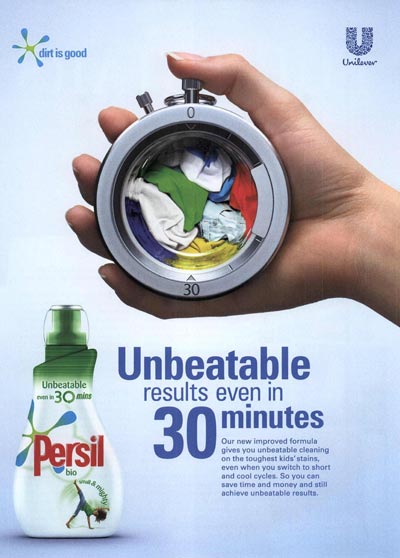 P&G on track for sustainability goals