A fang-tastic way to kick off the year.

Located on London’s Brixton Road and Birmingham’s Upper Dean Street, the pair of billboards show a collection of carefully placed wooden stakes that, when lit, create a silhouette of Bram Stoker’s monster (as played by Claes Bang). 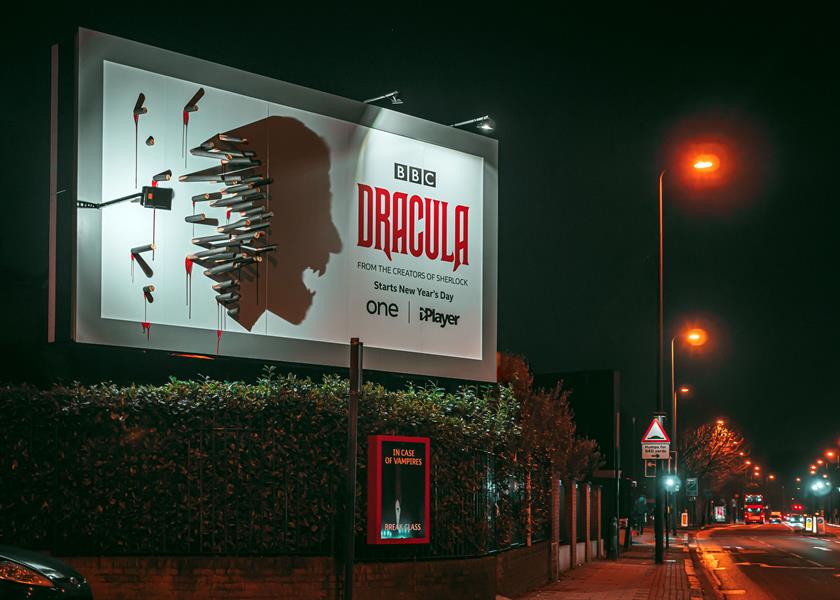 For good measure, below each billboard stands an "In case of vampires – break glass" box that contains (you guessed it) another stake.

Considering the standard of BBC's out-of-home activity last year – created to promote shows including His Dark Materials, Peaky Blinders and Killing Eve – it’s no surprise to find BBC Creative stand head and shoulders above the rest as 2020 gets under way.

Pick of the Week: Sony PlayStation's unnerving spot has loads of heart(s)

Pick of the Week: Heineken's witty ad is full of spirit of generosity

Pick of the Week: Expedia shows power of creativity and strategy combined

Pick of the Week: On the Beach offers something for the grown-ups

Pick of the Week: Nike spotlights the 93 black men who changed English football

Pick of the Week: M&S's jumper dance is rather moreish

Pick of the Week: Renault steals the show in a season of festive sentiment

Pick of the Week: Argos drummers bring back childhood memories

Pick of the Week: Rustlers entertains with absurd arthouse film