Pinterest is launching new video features for creatives and brands as it seeks to expand its advertising offering after its initial public offering.

The social media platform has created a video tab on business profiles, making it possible for brands to feature all their videos in one place for added discovery.

It is also introducing new video analytics for brands to collate lifetime views for a film. Pinterest differentiates itself from other social media by allowing videos to resurface over time.

Brands and creatives can now also schedule video content in advance through the Pin Scheduler tool.

Pinterest said its popularity is fuelled by people wanting to "try something new", making it an ideal media platform for how-to videos and tutorials.

Searches for "inspirational videos" increased by 31% in the past year, according to Pinterest. This is important for marketers who are keen to capture attention when users are open to new ideas and primed for purchase consideration. 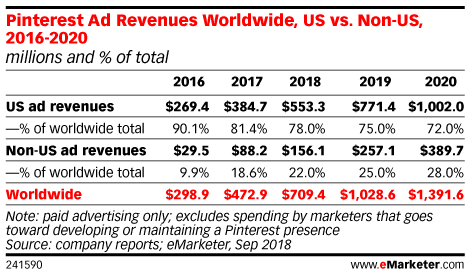 The video updates are being rolled out to all business accounts in English-speaking countries, alongside a phased roll-out to select creators globally.

Pinterest, which launched in 2010, debuted on the New York Stock Exchange in April and is expected to break the billion-dollar mark for global ad revenue next year, according to eMarketer.

Almost half of UK don't know Google is funded by ads

Oliver and the rise of in-housing: Is it really cheaper, faster, better?