Campaign group 38 Degrees has taken out a full page ad in today's Daily Telegraph to warn new health secretary Jeremy Hunt not to do "our NHS any further harm".

38 Degrees, which links over a million people together to campaign on issues that matter to them, is using the ad to publish an open letter signed by 121,227 of its members. 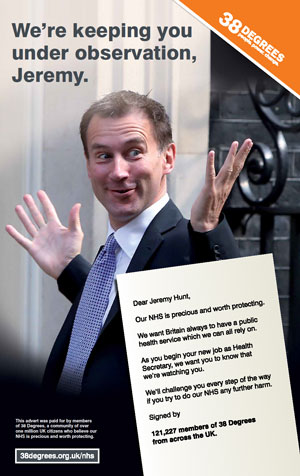 Hunt was appointed health secretary in a cabinet reshuffle last week, replacing Andrew Lansley, whose attempts to reform the NHS have met with opposition.

Other was the agency which produced the ad and it was booked into the paper by media agency Smithfield.