Protein World, the weight-loss supplements brand that caused a storm of controversy with a 2014 poster ad, has released its first TV campaign.

The ad shows women exercising, dancing and posing on a beach, accompanied by an upbeat club track and the message "new year, new you", which flashes on the screen.

The spot will run in the UK, US, France and Germany, according to the company’s chief executive, Arjun Seth, who posted the ad on Twitter on 3 January. The ad first aired on TV on 1 January, and will run on MTV and Channel 5.

The work was created and directed by an in-house team at Protein World.

Asked about creating a TV ad after last year's controversy, a spokesman for Protein World said: "This is a natural progression for us. It reflects the brand as we continue to lead the fight against the global obesity epidemic in a cool and sophisticated manner whilst being representative of a large segment of our customer base."

In April 2015, Protein World’s tube poster of a slim girl in a bikini next to the words "are you beach body ready?" provoked a storm of controversy. The Advertising Standards Authority received 378 complaints about the ad and banned it, citing misleading health claims, but refused to rule that it could have been banned for its offensive nature alone. 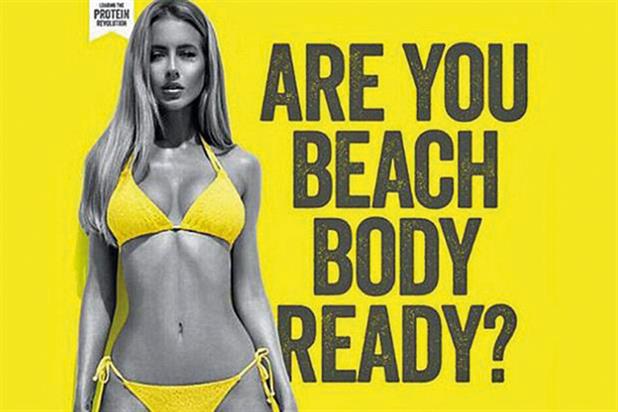 Shortly after the furore, Labour politician Tessa Jowell wrote in the Telegraph that she would ban sexist ads on tubes and buses if she were elected Mayor of London.

Protein World sponsors Ex on the Beach and Geordie Shore