Protein World's provocative ad featuring reality TV personality Khloe Kardashian has escaped censure despite over a dozen complaints that it promoted an unhealthy approach to dieting. 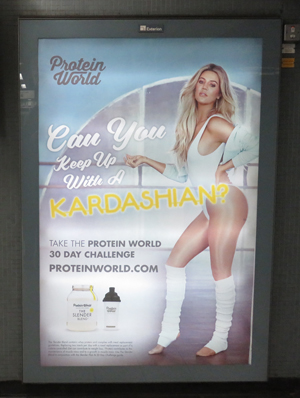 The brand, whose "Beach body ready" ad prompted hundreds of complaints in 2015, caused outrage again in February after launching posters of a scantily-clad Kardashian on the London Underground.

The six-month campaign, created by Thinkhouse, claims to "empower" young women as the star of Keeping Up With the Kardashians poses in skimpy clothing for a 30-day weight loss challenge.

Kardashian is pictured in a swimsuit with copy that reads: "Can you keep up with a Kardashian?" and "Take the Protein World 30-day challenge".

Following an investigation into the complaints, the Advertising Standards Authority has ruled the ads were not socially irresponsible under Committee of Advertising Practice rules.

In its ruling today, the ASA said: "We considered that the ads promoted Khloe Kardashian’s body image as desirable and aspirational; this was supported by her pose and the airbrushed style. However, we did not consider that she appeared to be out of proportion or unhealthy."

Protein World told the ads watchdog that the response it had received to the campaign was "motivating and empowering" and it had submitted the ad in advance to CAP Copy Advice. The ad was also approved by Transport for London and Exterion Media’s copy approval team.

In its ruling today, the ASA said: "We acknowledged that the use of the terms ‘Can you keep up with …’ and ‘challenge’ could be interpreted as having a competitive quality, but we did not consider that the terms or the ads overall encouraged excessive weight loss or other extreme or potentially harmful dieting behaviour. We therefore concluded the ads were not socially irresponsible."

London Live rapped for 30-minute, programme-style ads... with their own ad breaks

Brands must understand sexism before wading in