As Election Day nears, an army of bots is invading social media for the good of democracy

It’s been an election season of firsts in the U.S. The Democrats nominated a woman, a VP selection was announced on Twitter and the Republican frontrunner boasted about his genitals on television.

Add one more first to the list: "Voting bots" have invaded social media, using artificial intelligence to help drive Americans to the polls.

R/GA and the Ad Council are the latest to create a chat bot aimed at increasing the number of voters, specifically the number of millennial voters, for the 2016 election.

Simply called "GoVoteBot," it interacts with users in real time on Facebook Messenger. The bot was designed to be non-partisan, simply supplying information to users without attempting to sway their vote. R/GA and the Ad Council worked with Reply.ai to develop the bot, and with the US Vote Foundation and Google Civic to stock it with information.

Users can ask the bot whether they are registered to vote in their state, and if the answer is no, use the bot to sign up. By entering their address, voters can locate their polling place and see its hours of operation. The bot also helps people determine whether they need an absentee ballot and provides information about deadlines and voting laws.

"Our desire is to get everyone in America out to vote," said Chloe Gottlieb, U.S. executive vice president and executive creative director of R/GA, in an email. "The voting experience is much too complex right now. As a design-focused agency, and since we work at the intersection of design, technology and storytelling, this was an obvious problem that we wanted to find a simpler solution for."

The government and nonprofit organizations have worked to boost the number of voters who turn up to their polling stations every Election Day. Data from the US Vote Foundation found that 43% of eligible U.S. Voters did not cast ballots in the 2012 general election.

According to Gottlieb, the "GoVoteBot" helps people overcome barriers that could get in the way of registration and placing their votes.

"There’s quite a few websites out there that can help people register, but people still have to go to 10-12 different places to find all the information about registration, polling location, early ballot information, and no other tool that is using Messenger pulls all this information into one place," she said. "We wanted to give people information in the way that is easiest to get it – through chat, and make is super approachable and simple."

To start messaging with "GoVoteBot," users can go to R/GA’s Facebook page and click the "send message" link underneath the cover photo. Users do have to supply the bot with their state and address, information that the bot said is protected by Reply.ai’s privacy policy. 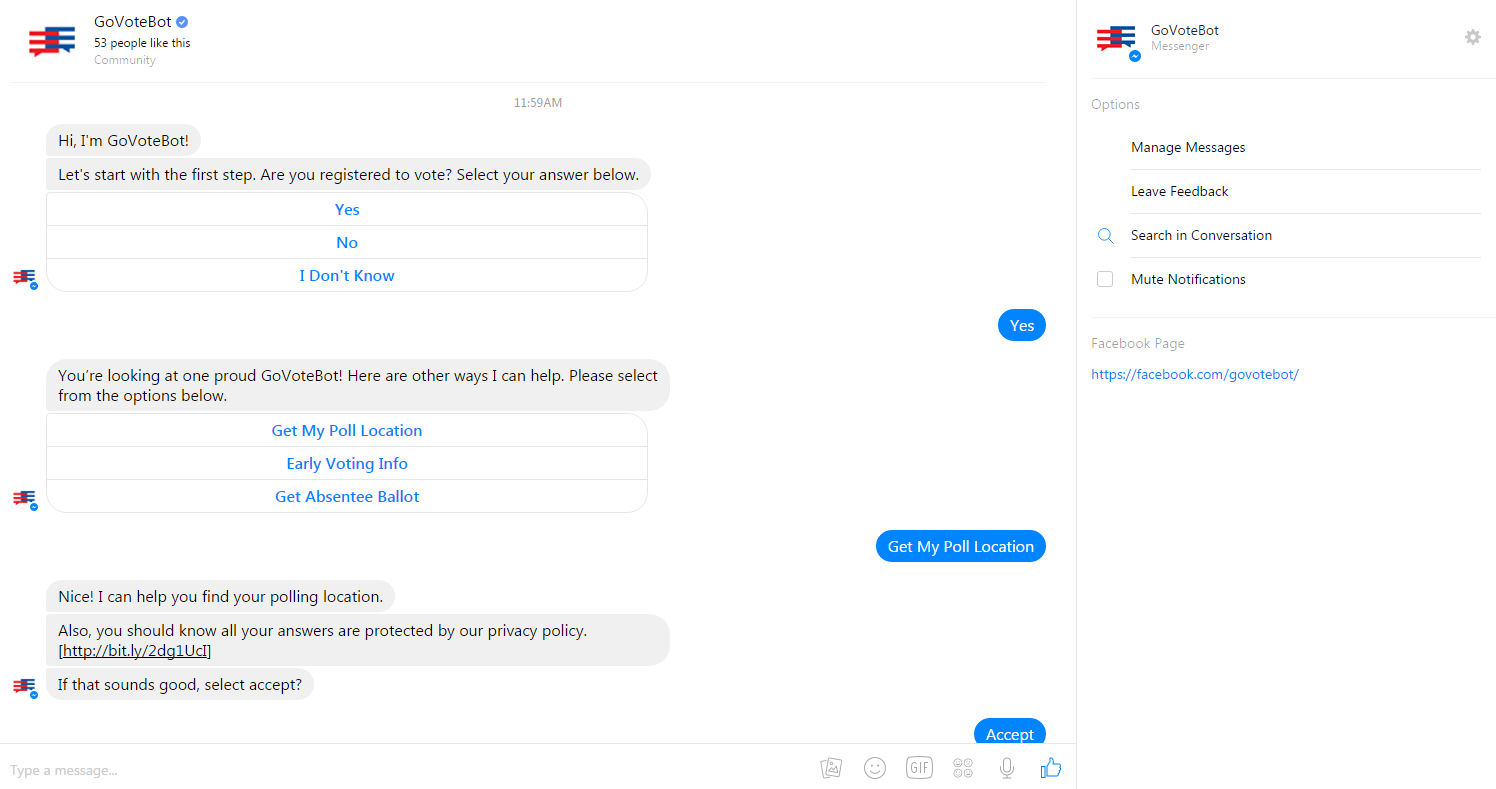 Of course, a bot is only as good as the information it has to work with it. Gottlieb noted that GoVoteBot does not yet have all the information about polling stations, since not all states have shared their specific locations yet. However, R/GA’s technology director, Thomas Chan, said that the bot is flexible. "As soon we get updated information, we can make it directly available to the users," he said.

Although the bot is available to all users, R/GA and Ad Council said they are directly targeting Millennials. They were inspired by a May Pew Research Center analysis of U.S. Census Bureau data.

The study found that the number of Millennials (those 18-35) of voting age almost equal the amount of Baby Boomers (those 52-70). As of April, there were 69.2 million Millennials eligible to vote, versus 69.7 million Baby Boomers.

Getting those Millennials to the polls is a goal that a lot of other recently invented "voting bots" have in mind, though not all are quite so non-partisan.

"HelloVote" is a bot that people can connect with on Facebook Messenger by texting 384-387 or visiting the website Hello.vote. Created by cloud communications company Twilio and nonprofit Fight for the Future, it not only targets millennials, but also immigrants and people of color—two demographics expected to vote overwhelmingly against Trump. 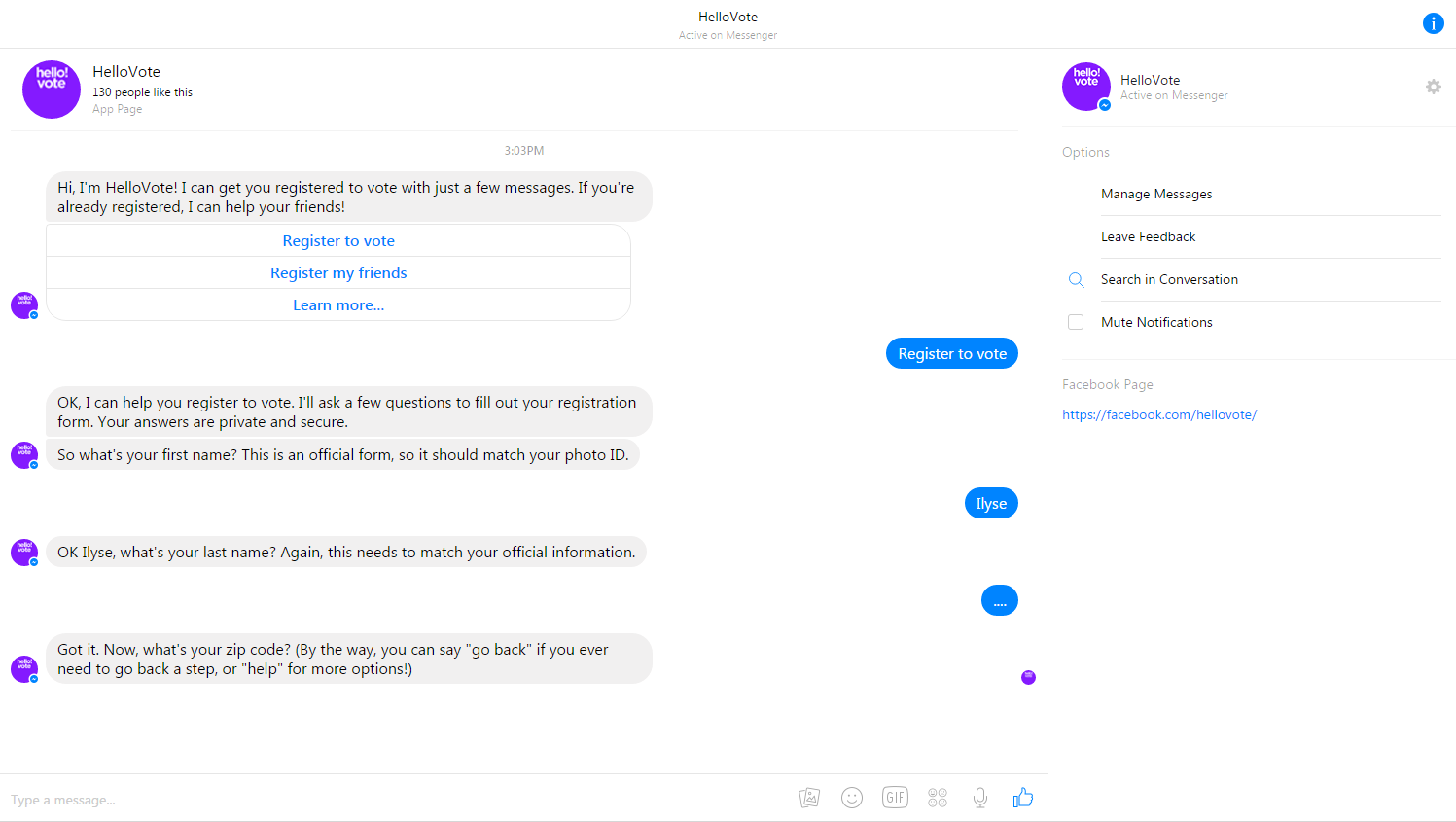 Then there is "BFF Trump," created by agency SS+K and developer Dexter. The bot sends Facebook users absurd Trump quote about topics ranging from Mexicans to abortion, and naturally, Trump himself. The quotes all come from Trump’s social feeds. The bot also directs people to articles about Trump’s controversial statements, such as "Every guy in the country wants to go out with my daughter," and "The point is that you can’t be too greedy." 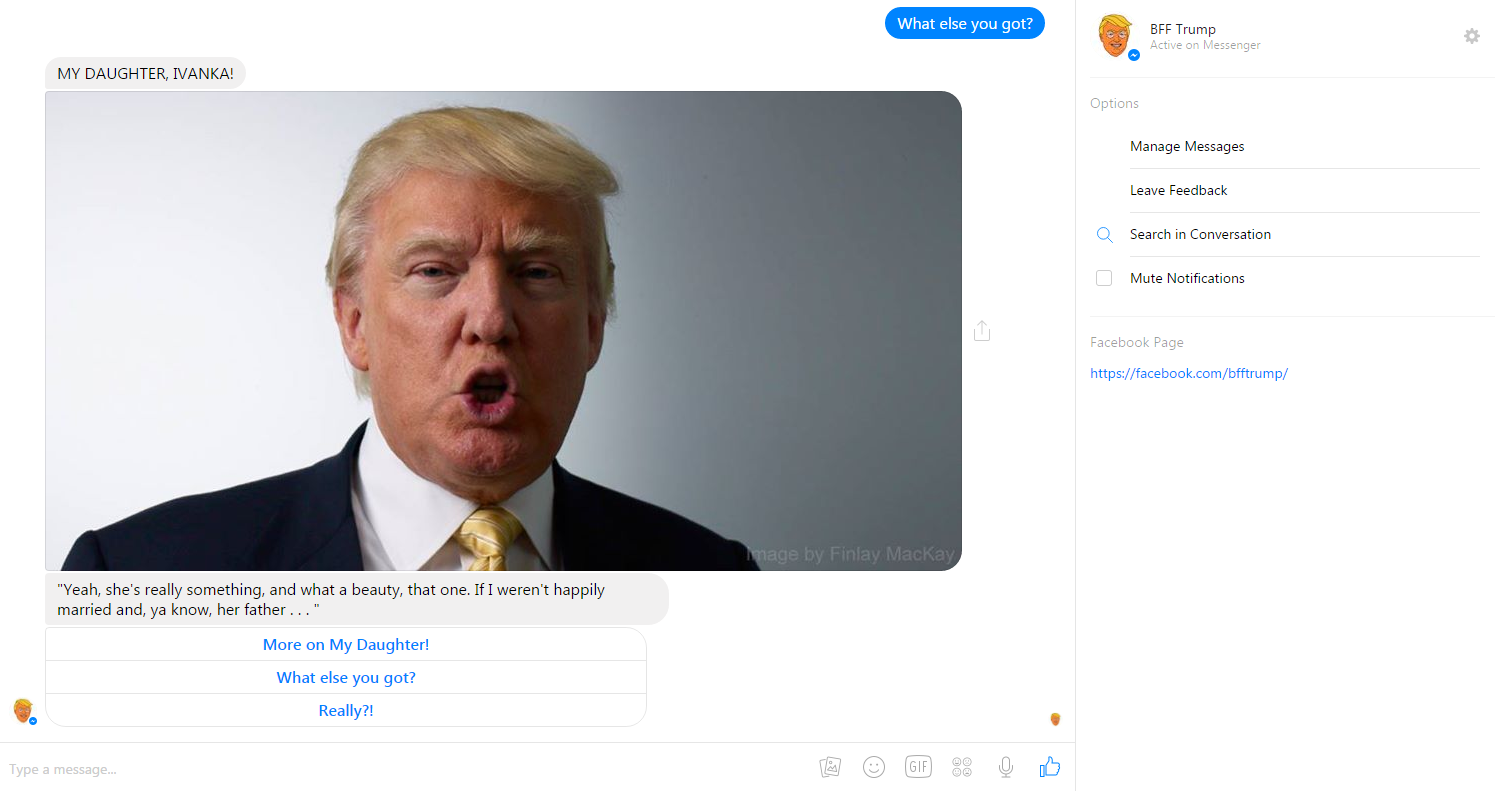 Though these bots are obviously of limited use—they become obsolete November 9th— the technology is well-suited enough to the task to justify the effort, said Brad Jacobson, experience strategist at R/GA, at least the information is getting out there.

"Everyone is looking for personal answers," he said, "and a chat conversation is a great way to surface only the information they need, at the time they want to hear it."

Last year, R/GA and Ad Council partnered together before for "Love Has No Labels," a campaign that worked to show that love can exist between all religions, races, disabilities. The work was the first PSA to ever win an Emmy for "Outstanding Commercial" at the Creative Arts Emmys.

AI will have bigger impact than social media: CMOs

The 'Moneyball' moment: Maximizing the final days before the election

Dearest America, have you learned nothing from Brexit?

Facebook study: 53% of consumers more likely to shop with a business they can message

How brands helped kill the app