Twitch.tv is taking the entertainment world by storm, yet it’s still not a household name for most. That’s about to change.

The video-streaming site, which focuses on live, gaming-related content, has leveled up immensely since its launch in 2011, right behind Netflix, Apple and Google in terms of peak Internet traffic in the US. While hot shows such as "Game of Thrones" might hit 8 million viewers for a season finale, more than 21 million people recently tuned in to watch Twitch’s coverage of major video game convention E3, and more than 100 million unique visitors spend time on the site every month.

The appeal of live-streamed gaming content, which is predominantly enjoyed by males 18 to 35, is fresh and readily available video coupled with a sidebar chatroom. Professional gamers; "speed runners" (those who play through games as quickly as possible); and game reviewers alike establish followings and often amass thousands of loyal viewers by sharing their personalities while they game. 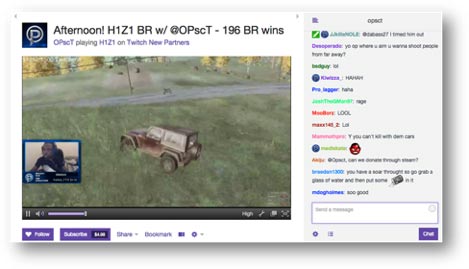 A typical Twitch stream: The video game is full screen while a webcam of the streamer is also visible. Chat is off to the right.

Naturally, as Twitch and other services become more popular, commercial opportunities and monetization strategies will start to crop up.

One of the more visible attempts into this space was the Old Spice Nature Adventure, a three-day promotion that invited Twitch viewers to control a man in the woods by typing actionable suggestions in the chat. Narrated by a witty Brit, hundreds of thousands of chatters helped navigate "Nature Man" through strange encounters and humorous woodland situations. The wacky outdoor gaming experience netted Old Spice 88,000 unique views per hour, plus millions of views of the event’s highlights and replays.

While this success shows promise for marketing to gamers on the platform, it’s worth noting that Old Spice did almost everything right here. Its demographic was on point, it seemed to genuinely understand the audience/culture, and its content was perfect for generating excitement.

For future advertisers to connect with this unique and highly coveted audience, several factors have to be considered. Read on to see how you can resonate with gamers, "360 no-scope"* the competition, and avoid being a "low ELO noob"** of the marketing world.

* A trick shot used in first-person shooter games that involves spinning around 360-degrees and shooting an opponent without the aid of a telescopic sight.
** An unskilled gamer who lacks knowledge of the game and consistently performs poorly.

Make your marketing interactive. This may be a bit obvious, but employing the unique interactive aspects of Twitch is paramount. What’s better than entertaining content? Content that you can personally affect while watching.

One of the main reasons why people go on Twitch is to communicate with the streamer and their fellow viewers, enjoying the opportunity to influence the stream and check out the content with a "room" of like-minded people. Common ways to grant some control to viewers include hosting votes/straw polls to make gaming decisions, inviting viewers to play with you online, and holding live giveaways and competitions. All of these examples could be commandeered by marketers to introduce interactivity into online video advertising.


Don’t take your brand too seriously. Perhaps due to the anonymity of the Internet or simply the maturity level of the demographic, Twitch chats are notoriously tumultuous places. There’s a lot going on, and viewers won’t hesitate to criticize content, hop on an opportunity to troll, or post endless nonsense in the chat.

If you can’t hack this culture, your brand might not be fit for the platform and will not be received well by viewers. Old Spice, with its quirky brand attributes and humor-laden offering, had no issue falling in line and playing nice with the community. But any brand coming in for a hard sell is likely to be met with some severe opposition. It takes a great deal of authenticity to win this crowd over, and toning things down with an informal approach is a great way to do it.

Support eSports. Electronic sports, or eSports for short, are organized multiplayer video game competitions. The notion of playing video games professionally may be met with skepticism, but don’t be fooled — pro gaming is serious business. An upcoming tournament for the battle arena game Dota 2 has a prize pool of over $15 million reserved for its competitors. The event will stream live to millions of global viewers from the sold out 17,000-seat KeyArena in Seattle.

Video games are no longer just for playing: Forty percent of all eSports viewers don’t even play any of the top eSports franchises, a sure sign that gaming is becoming a spectator sport. The promotional opportunities of eSports abound with traditional marketing options such as player sponsorship and event organization, along with new marketing possibilities afforded by technologies like live-streaming. If Twitch is the new TV, eSports are the new primetime programming.

Embrace "the grind" with consistent long-form content. Popular for streamers are "grind sessions," during which gamers will play for hours on end, working towards an ultimate goal that takes a lot of time and involves repetitive in-game executions. If you’re thinking about advertising on a live-streaming platform, expect to adapt to this construct. The ideal Twitch "ad" is a stream; not just a one-off video or media placement, but a long-form experience that can generate sustained interest for viewers.

Ready to fan the flames of marketing innovation? Here are how a few brand categories relevant to the demographic could potentially win over fans on Twitch.

Think you have a great idea for a Twitch campaign? We want to hear it!

Daniel Toth is a social content creator at Beeby Clark+Meyler.

Is esports a safe bet for advertisers?

For brands that know how to play the game, eSports could be a winner

Xbox touches up 'Gears of War' tattoos for new release

Mobile gaming stats: It's all about the moms

What Generation Z spells for brands

Creative v media agencies is beginning to get ugly