Laurence Green, a co-founder of 101, explains why he is weary of the "real-time" juggernaut.

"The test of a first-rate intelligence is the ability to hold two opposed ideas in mind at the same time and still retain the ability to function". So wrote F Scott Fitzgerald

I was reminded of those words as I sat down to prepare to speak at Thinkbox’s Think Big event last month. Because I’m as excited as the next (ad)man by the possibilities of "now", and specifically the new problem-solving opportunities it offers-up.

But I’m also wary that the "real-time" juggernaut may lead us astray as practitioners towards doing things just because they can be done. And, worse, far worse, that it may accidentally compound the troublesome drift of marketing from an art practised for the longer-term health of a brand and business, to a science lopsidedly focused on the short term.

These, then, are the opposed ideas I tried to navigate – enthusiasm for the now, laced with topnotes of caution.

In a departure from accepted presentational procedure, my first point is actually the most important. Because for all the roar of real-time, for all its claim on the modern marketeers’ imagination, we must remember some timeless stuff too.

Brand impressions are not generated in an instant, but developed over time. As Jeremy Bullmore famously put it, "people build brands like birds build nests – from the sticks and straws they chance upon." More importantly, those brand impressions pay back over time. (I am still buying The Guardian as the result of a TV commercial I saw 30 years ago).

With due exception made for what used to be called classified advertising (or "stuff I am in the market for right now"), most advertising does not pay back in the short term. But it does so heroically over the long term by creating powerful, defensible brand franchises. By tilting the pitch towards your brand rather than your competitors as a result of trade goodwill, consumer preference (however vague), organisational focus or indeed all of the above.

That it does so by supporting prices rather than just by driving volumes or share – but takes time to do so, as pricing effects are slower to crystallise than volume effects – has been expertly demonstrated by Peter Field and Les Binet in the IPA’s excellent research report 'The Long And The Short Of It'.

I worry that in our rush to execute in real-time – and see real-time results, which is at least part of its appeal – we are rowing at odds with this understanding, or must at least calibrate expectations accordingly: advertise, but not monetise, in real time.

My second beef, my second bulwark against too giddy an adoption of "now", is that the quality of your creative idea remains prime.

British Airways’ "magic of flying" poster is a sublime example of how to do it. (A rare example of advertising quite literally writing itself. Once it had been written, that is). But while it was paying its excess luggage fee on return from Cannes, copywriters elsewhere were crying hot tears onto their keyboards as they attempted to write "real-time" copy for Carling based on England’s performance at the World Cup. (I know because I saw them. The posters, not the copywriters.) 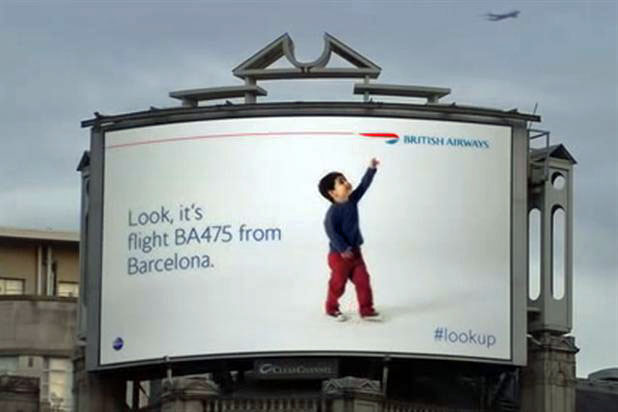 Going home after having watched Andy Murray’s unusually feckless exit from Wimbledon, I was served a poster – no pun intended – bearing his image and the proud but now misplaced boast: "Standard Life. Official Sponsors of Resilience."

As is the case with anything we do in real time, we need to embrace the upsides but be alert to the new risks it brings. Google "worst company tweets" if the latter requires evidencing, or picture Ed Miliband holding up a copy of The Sun newspaper. One way to mitigate that risk (thus bringing me on neatly to my next point) is of course a clear sense of your brand as "organising idea".

The faster you are going to execute, the more precise and commonly understood your direction of travel must be. Pace is only an asset, warned Arsene Wenger as he introduced Theo Walcott, if you know where to run. Hold the great Frenchman’s thoughts in mind as your answer the ever more urgent call to seize the day, to answer to now.

Nurture and cherish your purpose and values, those long-running immutable things, as these are the foundation stones of success in real-time, not their opposite. In a world where too many conversations prioritise media and channels, find a space for brand: the true parent and beneficiary of everything you do.

The story so far? Think long, even as you act short. Don’t let media choices annul creativity (sometimes it’s better that everyone sees the same, brilliant copy rather than their own personal fragment – the jigsaw picture not the jigsaw piece). Seat brand at top table.

And so to two more prosaic suggestions. Find a precise role for "now" in your marketing mix, and socialise it. There’s some stuff it can do and some it can’t. One of the big tensions around "Big Data" (aka our digital exhaust) is that companies will tend to have more data about their existing customers than they do their prospects.

Yet we know from the likes of Byron Sharp that most brands grow by acquiring more customers rather than chasing illusory loyalty. So against at least some marketing tasks, mass reach media will still beat personalised and the passage of time serve us better than real time.

Likewise, do not underestimate the organisational change that many companies will have to undergo to equip themselves to market in real time, let alone trade in real time. The response of most people in advertising to Oreo’s Super Bowl tweet was at least partially: "How did that get approved so quickly?"

Two concluding thoughts, then, both borrowed. One of the better Cannes overviews is always produced by Julian Boulding of thenetworkone, who observed that this year’s festival underscored the brand building benefits of both going further and going slower. He predicts a new "faultline" between agencies serving the modern marketplace, a distinction between strategists and tacticians.

But the last word belongs to Warren Buffett. The "Sage of Omaha" has made his investors exceptionally wealthy over the years by investing in exactly the kind of brands – managed for the long run – which I alluded to earlier.

Buffett famously sees the stock market as a voting machine in the short run, but a weighing machine in the long. I see parallels in our industry. We need to get better at weighing our contribution to our clients and their brands over time, and make choices accordingly, even when – perhaps especially when – there is a clamour to "vote now".