Jonathan Durden overcame his insecurities about re-entering the advertising world in his late fifties. He urges others to do the same and calls on the industry to urgently address its ageism.

The communications industry is clearly trying to change its attitudes regarding equality, sexism and transparency. Witness the efforts of the Advertising Association, which recently published a paper on sexual harassment, called "TimeTo".

But what of ageism? This topic is largely overlooked. In our business there has always been a strong bias towards employing young people – and it is well known that if you are in your forties, let alone fifties, you can effectively ditch any hopes of a long and fruitful career in advertising.

Older applicants will write themselves off for fear of being seen as past a predicted sell-by date, well before they set foot in an interview room.

I believe this becomes a self-fulfilling prophecy and that mature and experienced talent should at least meet the challenge half way before condemning themselves to the scrapheap. One route is to mentally reboot – to shut up the noisy voices lodged in the frontal lobes of one’s brain. The ones that keep you awake at night, relentlessly telling you that you are no good and on the verge of being found out as a fraud.

When I was 57, I returned to the UK after a three-year sabbatical up a mountain in Spain with my wife and baby. But I was scared; fearful that life had moved on, afraid of what I had missed and of how others would see me – as an older man who was out of touch.

So, I decided to mentally reboot myself. By facing things that were way outside my comfort zone, I hoped I might at least meet life half way by banishing my self-destructive, "let’s look for a landmine to jump on" paranoia.

So I made a list. A list of all my fears, no matter how random. These included holding other people’s babies, mosquitoes, crying in public, being a passenger in a car, experiencing extreme poverty, witnessing injustice and general violence.

This process of making a list has the effect of alerting one’s head to the relevant, itemised things that randomly cross one’s path in the course of a day.

Almost immediately, I was lucky enough to meet Lucy Buck of the Child’s i Foundation. This is an organisation based in Uganda that reunites abandoned babies, often infected with Aids, with their families, or reintegrates them into their local communities.

There was nothing about this that I found appealing but it ticked almost every box on my terror list. To be clear, I was not trying to save the world but, as usual, it was all about me.

In fact, my greatest worry was that I would get in the way or open my gob and offer opinions that hampered the efforts of truly useful carers.

In return for Lucy’s generous offer to take me along, my mission was to help her team find new ways to trace relatives and recruit suitable families to take the kids back into a loving society. Media stuff .

Three weeks later, I found myself landing at Entebbe airport with Lucy. A driver was there to take us to Kampala for a glamorous stint of sleeping on the floor with many other volunteers, shrouded only in a mosquito net.

Terrifying enough. However, the driving experience from the airport is best described as Mad Max meets Scrapyard Challenge. There are no rules whatsoever. No manners, no mercy. Not even Tarmac, just pitted, gaping craters flanked by deep ditches on either side of the so-called "road".

The taxis are, in fact, mopeds called boda bodas, which carry up to four people. The helmet-free riders weave and dart between lorries and cattle, oblivious to any traffic lights or defined lanes.

As a pedestrian, you have two choices. To walk facing oncoming vehicles and see your own death coming, or to cross over and let it be a welcome surprise. 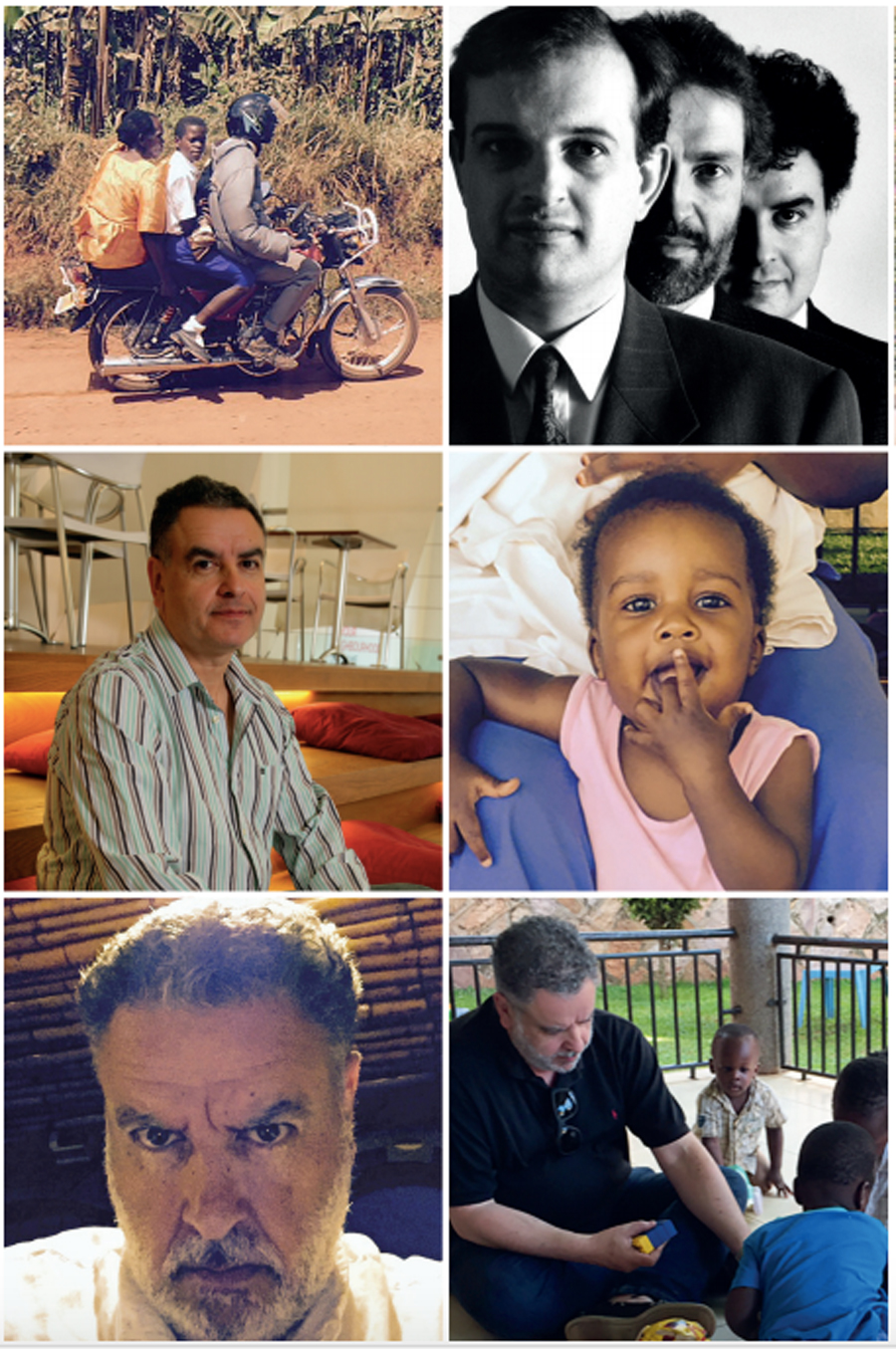 It was 1.30am and we had barely travelled any distance through Kampala when John, our driver, spotted a boy running barefoot on the road. We pulled up. Eight-year-old William said his father had sent him on an errand to pick up some money from a man in a bar some miles away.

We took him on board and drove to a police station. Faced with leaving this lad to a night in a police cell, we asked whether we could transport him to the Child’s i home for the night. The police agreed with our request.

En route we stopped at a street market, which was in full swing at 3am. It resembled Petticoat Lane after a gas mains explosion. William was fed with a hot meal and dropped safely at the home.

Eventually we arrived at the sleeping quarters at 3.30am, where the church next door was still banging out gospel songs to enthusiastic but deafening drumming. Welcome to Uganda!

After a sleep interrupted by fear of being bitten by insects, next morning I explored the facility. Three four-year-old boys all greeted me loudly with "Hello Daddy!" They are the best marketers I have ever met – wow.

On day two, we were off to some isolated villages far outside the city, with highly professional social workers, to witness some of the newly reunited or adopting families.

Removing our shoes upon entry, I was astounded by how little the people had. Not even running water or electricity in some cases. They lived mostly in one room, without any windows and just a curtain to define the shared sleeping area.

One dwelling housed three sets of twins, whose mother had tragically passed away. Their aunt was therefore mothering the toddlers single-handedly. She was a joyous and optimistic person, far from the desperate wreck I had expected. Meeting her was an incredible and humbling experience.

And so the fortnight unfolded, with shocks and surprises on a minute-by-minute basis. I sat, listened and took it all in. No tears, no disrespectful cash handouts that might undermine the incredible dedication of the team. And no pity.

I was awestruck. I walked away from this self-inflicted tale of horror and duly rebooted. The noisy idiot in my head was silenced, utterly in shock, leaving the rest of my brain to sort out my own tiny fears and face my new world.

I returned and have never looked back. This idiot is now overrun with amazing opportunities, which I would have self-sabotaged without this mental reboot. They include LADbible, Digital Cinema Media, the7stars, ITV and an array of incredible start-ups. So, while this is not the only route, I do say at least meet half way the horror of exploring your dreams.

Make an effort. Release yourself and all the wisdom and experience that you have to offer. No-one is looking to humiliate or expose you. It’s all in you.

I am inspired by the fact that ambitious and talented people are keen to learn from you if you are freed from your own misgivings. Make a list.

And to young people in positions of enterprise or power, please do not judge people by their outer vessels. The Paralympics, and even the excellent Maltesers ads, have forced us all to reassess the similarities we share and not focus on the differences.

Ageism is in the same category. It’s a waste. So is being judged for being overweight, generally unattractive or even having unwisely placed tattoos. That’s the vessel, not the talent.

And don’t get me started on the lack of celebration of modern men. My partners and I have launched, and self-funded, a male-targeted brand called Below the Belt Grooming, which champions the unanswered needs of men.

So many causes, so much to do. Finally, the message from me is to at least meet people half way, instead of just lazily moaning from the sidelines or judging on physical appearances. People are good.

Jonathan Durden is a creative consultant and strategic advisor, who is also a co-founder of PHD and Below the Belt Grooming.

'Invisible and expensive': what ageism looks like in adland

Fake news is widespread in media too

What's in it for you?

Attitudes to ageing are getting old

Growing up in adland: Why we should embrace age diversity