There was a strong recovery for almost all media adspend in Q2, according to the AA/Warc report.

Total UK adspend is due to soar to £29.3bn in 2021, higher than the predicted £27.8bn earlier this year, with record figures expected for Christmas, according to the latest Advertising Association/Warc Expenditure Report.

The report estimates UK adspend will grow by 24.8% – the largest annual rise on record – with total investment for Q4, including the festive period, forecast at a record-breaking £7.9bn, almost £1bn higher than in Q4 2020.

This follows a strong year-on-year recovery in Q2 for almost all media in which actual figures show adpsend for out of home almost quadrupled and digital magazine brands more than doubled as the UK emerged from a third national lockdown.

Meanwhile, overall figures for 2022 suggest spending will rise to more than £31.5bn, a 7.7% annual increase. Growth across most media is not expected to match this year’s, apart from cinema and out of home, where spending is predicted to rise sharply again.

Experts behind the forecasting said the data showed “bullish trade” for UK advertising, noting TV and search were set for a strong Q4, suggesting “it will be largely business as usual for the industry this year”. 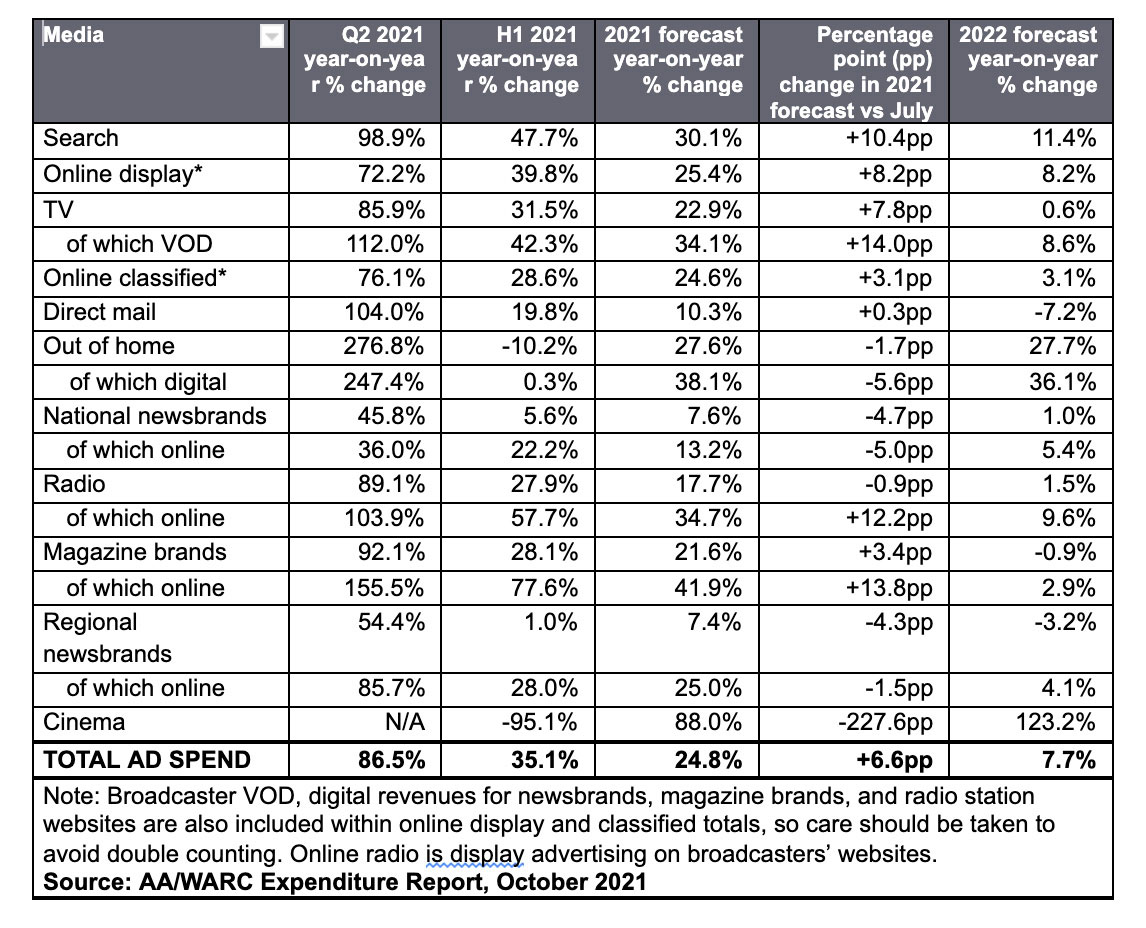 “Adspend is set to grow by 24.8% to a record £29.3bn, proving advertising’s role as a vital engine for growth in the UK economy, particularly during the upcoming Christmas period. The forecast of strong online performance is further evidence of the UK’s position as the world’s most digitally advanced advertising market and Europe’s biggest.”

James McDonald, head of data content at Warc, added: “The latest data demonstrate bullish trade in the UK’s advertising sector, despite potential inflationary headwinds and supply chain disruption in the run-up to Christmas.

“Strong fourth-quarter projections for TV – a medium heavily leveraged by retailers during the golden quarter – and search, which encompasses activity on ecommerce platforms, suggest it will be largely business as usual for the industry this year.”

Travel adspend recovery stalled until 2023 despite 36% boost next year