Is it an ad, branded content, an event, a partnership, the ultimate PR stunt or a piece of history?

It doesn’t really matter. All I know is: #IwishIddonethat.

On 14 October 2012, Felix Baumgartner jumped 119,846 feet, reaching 834.4mph, with a total free-fall time of four minutes, 19 seconds. Every second was captured using 135 cameras. And one is hard-pressed to find a shot where there isn’t evidence of a Red Bull logo.

Imagine going to the client with this proposal: "So, the idea we want to recommend is taking this slightly mad, relatively unknown dude who has a penchant for base jumping. We’re going to partner with him, and spend a lot of time and effort forming a specialised team. After years of prep, we’ll then have him jump from space, so he reaches sonic speed. And we’re going to perform this live. Yes, live. Hopefully, he won’t die."

The bravery of this idea and client must be applauded. But also the genius of it. It has human endeavour, a potential world record, the risk of death, drama, anticipation, a great location and great casting with Felix – who not only looks the part, he gives a great performance. It has all the magic ingredients of the ultimate story. 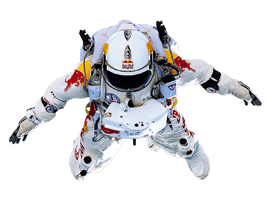 Plus, there was all the social media content that came from us being able to genuinely feel part of the action, moment by moment. In the three-hour delay before lift-off, we were enticed into playing games to guess where Felix would land, encouraged to send in Tweets (some of which were retweeted by Red Bull Stratos itself) and, of course, there was the back catalogue of Red Bull videos to watch on YouTube if we got a little bored for more than three seconds.

It’s still too easy for agencies to come up with an ad as a solution. I’m feeling more than a nudge with Red Bull Stratos – it’s a proper kick from behind to remember to be brave and do ideas, not just ads. A Leo Burnett wisely said: "If you always reach for the stars, you may not quite get one, but you won’t end up with a handful of mud either."

Red Bull reached for the stars and not only grabbed them, it ripped them back down to earth at the speed of sound to perform the ultimate execution of "Red Bull gives you wings".