Her new platform Noon aims to empower older women, who are often overlooked by both the mainstream media and advertisers.

Last year, Eleanor Mills, former editorial director of The Sunday Times, found herself at a crossroads. She had left a big job after more than two decades at the newspaper and begun to wonder, “‘Who am I, what am I, if I’m not this lady at The Sunday Times?”

At the same time as her career change, an empty nest was looming as her eldest daughter was applying for university. Then, early on in the pandemic, she came down with Covid.

“I suddenly had this massive sense of life being in flux. All of these things that had been certain were suddenly up in the air and I felt like I was in free fall,” she recalls. “It was a real transitional moment for me.”

Mills did what many others do when faced with uncertainty and seeking answers: she went online. But she found “there was practically nothing out there to help women like me”.

She talked to her friends, including her sister-in-law Ella Mills (aka food blogger Deliciously Ella) and Facebook EMEA vice-president Nicola Mendelsohn, and they all agreed: “The lifestyle space for millennial women is absolutely saturated but for my generation – Generation X, women in midlife between 45 and 60 – there’s very little out there. It’s a massively underserved demographic.”

It dawned on Mills that “in many ways older women are one of last bastions of the diversity conversation. Ageing has been a real taboo and we’re really sidelined.” 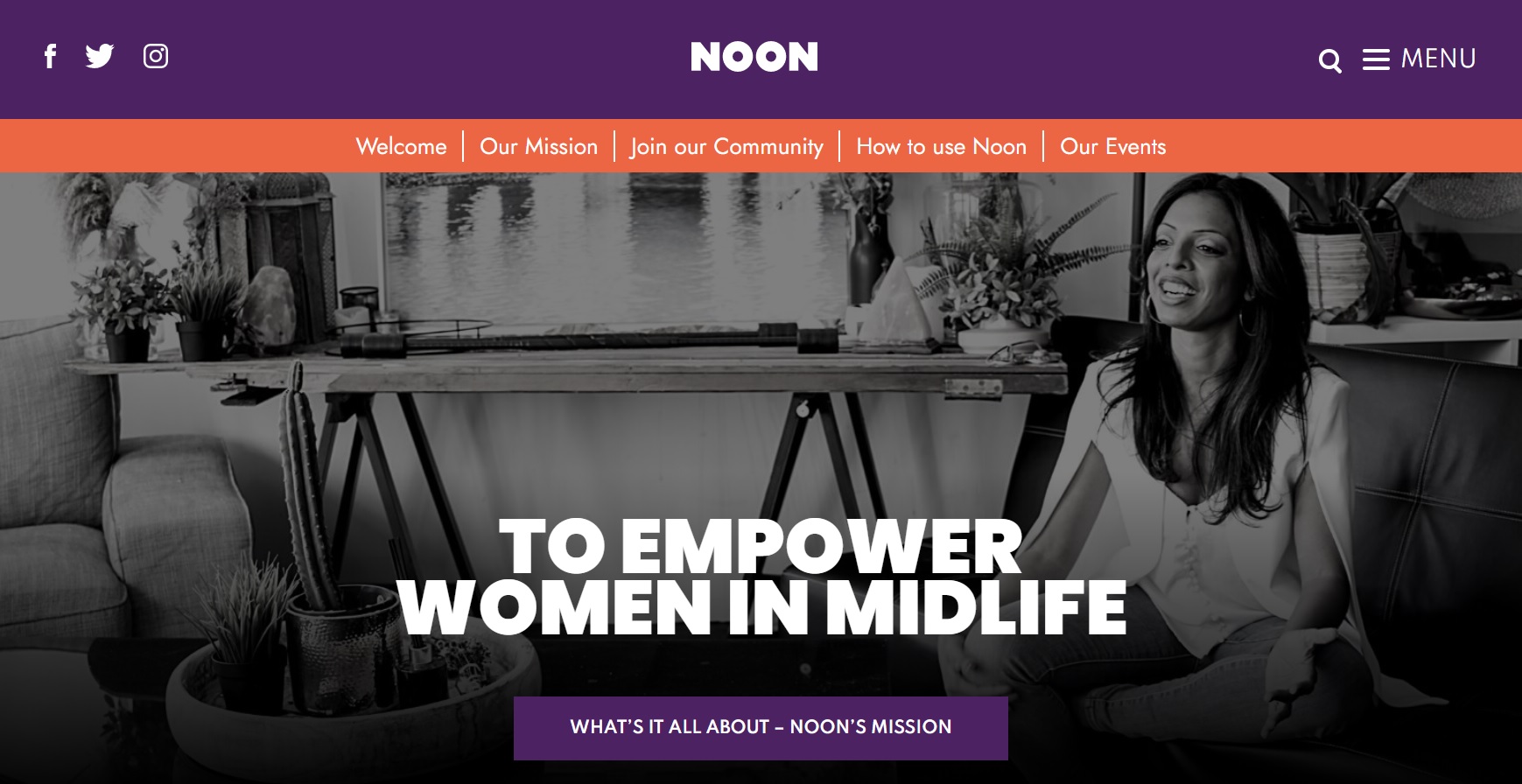 Mills' new venture is trying to smash that taboo by putting the voices of older women front and centre. Launched at midday on International Women’s Day (8 March), Noon is an online media platform “to empower women in midlife”. In a blog published on the Society of Editors’ website, Mills described Noon as “Refinery49 not 29.”

Noon aims to be both a media platform and a community that will “help women with this perfect storm of stresses that hit you in midlife”, Mills says. It has assembled expert contributors to talk about subjects ranging from finance to health to marriage and divorce, and has an advisory board including financier and campaigner Baroness Helena Morrissey, top divorce lawyer Helen Ward and women’s health specialist Dr Nighat Arif.

As well as publishing editorial content about issues facing older women, it will host online events, masterclasses, groups and in-person retreats. Its first retreat, scheduled for June, is entitled “Do you think about drink?” and will feature journalist and presenter Susannah Constantine discussing drinking habits and mindfulness.

“It’s not enough just to read an article. People wanted to be more involved. We call it positive journalism – journalism which actually engenders activity. That’s the model I’m taking to Noon,” Mills says.

These community components make Noon a different type of media model from what Mills was accustomed to in her 23 years at the Times.

“In the ‘90s and early 2000s, newspapers were the centre of culture. What I’ve realised since is newspapers don’t have that platform now. Celebrities don’t have to give an interview to The Sunday Times – they can speak directly to their followers,” Mills says.

“Newspapers are a bundle – they’re a collision of lots of different things and a spectrum of people. But the way the world is going is all about the niche. It’s about understanding your niche and building a community around their shared interests. I want that community to grow outwards.”

This particular community has long been neglected by the media, according to Mills. She wrote in her Society of Editors blog: “Older women are very much the demographic the mainstream media forgot.” As a journalist at the Times, she sometimes struggled to get coverage for subjects that were important to older women, she says.

But none of that will be off limits at Noon. Recent article headlines include: “I feel sexier at 55 than at 29”, “How I became a comedian at 60” and “My menopause: not a journey but a full-on car crash”.

On the latter subject, Mills commends the fact that people and businesses are becoming more aware of the menopause and its effects on older women. High-profile women such as Kirsty Wark and Mariella Frostrup have spoken up about their experiences, and last week, the advertising holding company Publicis Groupe unveiled a plan to roll out a formal menopause policy across its agencies.

However, “I don’t want to be defined by whether I’m menopausal or not”, Mills says. “Part of feminism is really redefining women so they’re not defined by their biology. We’re not going to put menopause front and centre – it’s just one of the aspects.”

Instead, Noon readers can expect articles, videos and personal stories on topics rarely examined from the perspectives of older women, such as sex and dating, health and beauty, finance and investing, fertility grief and more. “We’re really beginning to highlight some of these massive structural and cultural issues,” Mills adds.

It is not only the media that has largely forgotten older women – brands are guilty of overlooking them, too, Mills says. And this is a massive blind spot for advertisers, which often underestimate this group’s spending power.

Mills cites research showing that women aged 40 to 60 years old spend £92bn annually and 93% make all or most of the purchasing decisions in their household, while half are the chief income earner. Women in that age bracket are also 90% more likely than women under 40 to earn more than £40,000, and for the first time, women in their 40s are now earning more than those in their 30s.

“I turn 50 this year, but the only things that brands try to sell me are anti-wrinkle cream, incontinence pads or maybe some flooring to put my yoga mat on. A lot of women my age are running big organisations, have more money or are really stepping into their power. Yet no brands are thinking about us as this incredibly powerful market,” Mills says.

Digital media for women has previously been a tough nut to crack commercially, with other female-focused platforms such as The Pool going bust. Perhaps some of those weren’t able to make their commercial case strongly enough to advertisers, but Mills is hoping to change that. “It’s completely crazy that brands and advertisers are not talking to these women and are not even taking steps to talk to them,” she says.

Noon’s business model is “not just to make money out of journalism but to run paid-for events”, Mills explains. “I don’t think an online magazine that is dependent on display advertising has got any legs. But an online venture that pulls together a community and can sell them events and activities, and also be an opportunity to work with brands in partnerships – we can do a lot of that.”

Noon’s aim is to have six key brand partnerships across segments, such as finance, automotive, health, beauty and travel, to develop branded content and “help them evolve their conversation with this valuable market”, Mills says. It is already in talks with three brands to do this. It could also undertake consulting work with other brands beyond its six main partners, she adds.

The challenges of building a sustainable digital media business will be steep, but Mills’ vision has clearly hit a nerve. Since announcing Noon, she says she has received an outpouring of support on social media, which, in itself, is evidence of the large appetite for content serving this “forgotten” audience.

“I want to change the way people perceive women in midlife. Women like me are just getting started and we can really boss it. And yet the world and media haven’t quite caught up with that. Nobody’s speaking to us or reflecting our interests,” Mills says.

“We’re a different kind of generation – we don’t want to have our mother’s midlife. We want to do it differently. There’s no map, but I want Noon to be a map for what the future might look like.”

Campaign podcast: Ageism row in adland and marketers open up about Covid struggles