If your metrics are not delivering data that makes your marketing more effective and accountable, you're likely asking the wrong questions. It's time to reappraise your strategy.

Back in the 19th century, natural philosophers were confounded by the nature of fire. The prevailing theory at the time told them that the element was one of four fundamental building blocks of matter, along with earth, water and air. They called this fire element phlogiston. Yet, no matter how hard they tried or how ingenious their experiments, they could not pin it down.

It was only later, thanks to despised tax collector Antoine Lavoisier, who met his death during the French Revolution, that the problem was cracked. 'There is no fire element,' Lavoisier declared, 'so no matter how hard we look, we will never find it inside the thing that burns.' Instead, he argued, fire was a reaction between a particular constituent of the surrounding atmosphere ('oxygen') and a particular constituent of the burning object (now known as carbon).

Because the natural philosophers had framed their question in a way that generated confusion, they spent 100 years looking for the wrong thing in the wrong place. Even with the most exquisite, sophisticated experiments, the brightest minds could not distinguish truth from error, so they made the same mistakes time and again.

Something similar is happening with marketing metrics. To see what is wrong, we have to look at how the metrics problem is currently framed.

Our current theory goes something like this. 'The consumer' is a sort of stimulus-response machine, responding in predictable ways to the stimuli it receives from its environment. As machines go, it is very complicated, involving all sorts of conscious and unconscious emotions, thoughts, impulses and associations, but, ultimately, given generous helpings of a magical ingredient called 'insight', its inner workings can be exposed to reveal a series of internal triggers, buttons and levers.

With the right insight, marketers can then design stimuli that act as inputs, pushing these buttons and pulling these triggers to generate outputs in the form of desirable 'changes' in consumer attitudes and behaviours.

Because the machine is very complicated, we rarely generate perfect insights leading to perfect stimuli and therefore perfect responses. However, by carefully measuring the changes our stimuli induce, we can identify which stimuli are 'effective' in triggering the changes we want, and which are not.

By setting the costs of these stimuli against the benefits of the changes they trigger, we can also demonstrate ROI and therefore 'accountability' - not to the consumer/machine, of course, but to the corporation seeking to influence/change/control the machine's behaviour.

Of course, actually disentangling the effects of our stimuli from all the other stimuli in the consumer's environment is very difficult, especially if you factor in time delays between incoming stimuli and outgoing responses via mechanisms such as memory and 'brand associations'. In principle, though, it should be possible. With careful measurement, therefore, the most effective stimuli can be discovered, thereby leading to more effective and accountable marketing.

The chart that appears on the opposite page, taken from a US Marketing Science Institute project to sum up 'what we know' about marketing metrics*, illustrates this theory perfectly. It looks pretty impressive and scientific, but take a closer look. In human affairs, have you ever come across a situation where the arrows of causation all flow in one direction only?

Take a simple conversation. A says something to B, causing B to respond. B's response then causes A to respond. So A doesn't only cause B, B also causes A. Yet, in this diagram, 'marketing spending' appears as an all-powerful prime mover, causing a series of consumer states and behaviours (awareness, preference, loyalty, satisfaction), with the consumer playing no part at all.

Doesn't that strike you as a bit odd? This 'behaviourist' theory - one that sees the human mind as a black box which simply turns 'inputs' into 'outputs' - had all the respectability of scientific orthodoxy in the mid-20th century, which is when most of today's theories of marketing were being formulated.

Nowadays, however, psychology researchers think the opposite is true. Far from being impressionable pieces of putty just waiting to be moulded and 'branded' by outside influences, human beings pretty much set their own (emotion-ally- and endogenously driven-) agendas and are incredibly hard to divert from them.

As autonomous goal-seeking agents, consumers are always actively scanning their environment for opportunities to help them to achieve these goals or threats that could under-mine them. They filter and edit everything they come across according to this pre-existing agenda, discarding anything that does not fit.

Consider some of the differences this 'active consumer' perspective creates. The stimulus-response theory tells us to look for and measure 'changes' in consumer attitudes and behaviours. The alternative theory suggests that consumers will continue on the course they have chosen, regardless of what stimuli you throw at them, and that they pick and use only those stimuli that fit their value agendas.

Superficially, the resulting metric might look exactly the same, but how we interpret this metric might be very different. Does the sales spike following a price promotion represent 'success' in changing consumer behaviour? Or does it represent success in aligning to what the consumer intended to do anyway - buy the best-value product?

If the alternative theory is correct, the marketing metrics you use today are almost certainly not measuring what you think they are measuring. They are probably not, for example, telling you how effective you have been in 'changing' your customers' attitudes or behaviours.

In fact, if the alternative theory is correct, the most important metric in marketing is the value it delivers customers - because it's this that drives their 'response'. Yet the traditional model doesn't even recognise this as a consideration.

And, of course, metrics influence actions. If you believe that marketing's job is to 'change' consumer attitudes and behaviours, then you will invest your resources trying to find more 'effective' and powerful stimuli - seeing every consumer touchpoint, for example, as an opportunity to deliver mind-altering brand messages. If, on the other hand, you believe that consumers are always scanning their surroundings in search of value opportunities, you will see every touchpoint as a chance to present one. Practically speaking, they are like chalk and cheese.

Of course, things aren't as simple as this. There is a lot of noise, and there are countervailing factors.

Take the role of awareness. This is an involuntary act. You cannot decide to become unaware of something of which you have already been made aware. To this degree, specifically with regard to awareness, stimulus-response theories of marketing are spot-on.

Awareness is not the same as persuasion, though, and once you are aware of something, more awareness is pointless.

to induce consumers into making decisions that are bad for them, but good for the marketer.

In such a case, what is your marketing metric actually telling you? Measuring 'changes' in isolation doesn't help you distinguish activities that add consumer value and those that destroy value. Without this, your metric may actually introduce new confusion.

The bottom line is this: the way in which the metrics debate has been framed so far smuggles in a mental model that sees marketing as a unilateral, manufacturing process of effecting changes on passive objects, bending and shaping them to the manufacturer's wishes. This metrics agenda focuses on measuring 'changes'.

The alternative approach sees marketing in terms of mutual relationships - the need to identify and generate win-wins. For this to happen, we must be able to measure what these wins look like from both sides' point of view. The two metrics' agendas are completely different.

If you cannot answer these questions, it might be because you are stuck in a phlogiston hunt.

Alan Mitchell is a respected author and a founder of Ctrl-Shift and Mydex. 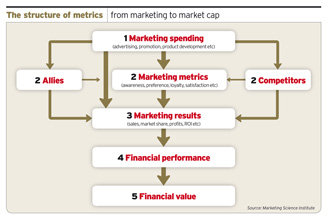 Alan Mitchell: Reinventing marketing - Brands should embrace a role as providers of information

Reinventing marketing: Alan Mitchell asks if marketers are prepared for the era of volunteered personal information