The lipstick effect has become a defining cliche of the fallout from the recession. From biscuits to scented candles, it has been applied by FMCG brands to describe the inexpensive treats that people want.

For Revlon, the company that can lay claim to inventing nail enamel 80 years ago, however, the 'lipstick and nail effect' is in action in the literal sense.

'Lips and tips' - a phrase Revlon's founder, Charles Revson, was not afraid to use when offering glamour advice to strangers in the 30s - has proven a solid business, at least in the latter part of this economic crisis.

'Revson used to say that in the factory we make cosmetics, and in the drugstore we sell hope,' explains Julia Goldin, global chief marketing officer of Revlon, in a meeting with Marketing during a flying visit to the UK from the company's New York base.

'He believed in encouraging women to express their fabulous femininity, right from the first thing he did, by creating nail enamel - lips and tips should match.'

Goldin, who was a Coca-Cola marketer for 13 years, argues that consumers are 'embracing little indulgences and becoming more impulsive when it comes to beauty'. This has opened opportunities for Revlon, with a string of new products hitting shelves this year. It is Goldin's job to tap into that consumer mood by ensuring everything Revlon does is about pampering women.

However, this recessionary effect did not create an instant win for the brand. The performance of its European arm dragged down Revlon's global results in 2008 and 2009. The brand was being 'left behind, out-shouted and out-innovated', according to then Sara Lee marketing director, Margaret Jobling, writing in this magazine at the time.

A back-to-basics approach was called for, and that was precisely the strategy adopted by Goldin, who became Revlon's first global chief marketing officer 18 months ago. The Russian-born marketer, who moved to the US in her teens, now wields an estimated annual advertising budget of £160m.

The company's recent growth is, of course, not just down to Goldin's arrival. Nonetheless, Revlon's president, Alan T Ennis, has spoken of the importance of marketing's role. 'Our emphasis on effective brand communication and strong in-store execution drove our positive performance,' he said last month, as he announced that 2011 global sales were up 4.5%.

Ennis has also described Goldin as a 'marketing visionary' and this trait, she says, has been integral to Revlon's marketing. 'Being a visionary doesn't mean you are clairvoyant, but a vision is what drives global success and consistency; it's very much the role of the leader. Putting the vision on a piece of paper - here's who we are and this is where we need to go - sets the organisation on a track. People then get inspired by the vision, and they do great things as a result.'

Goldin's vision involves recapturing what originally made Revlon a global brand. Its 'Fire & Ice' print ad of 1952, for example, was considered 'too racy' and banned by publications because it featured a curvaceous woman in a provocative pose, alongside questions such as 'Do you close your eyes when you're kissed?'

Rather than reinventing Revlon, Goldin's ambition is for it to reconnect with women worldwide. Its marketing team spoke to 1000 women worldwide last year, asking the simple question: 'what do you want?' Beauty and sex appeal came bottom of the list; intelligence and charisma were, according to respondents, 10 times more important. What was most desired, Goldin explains, was confidence. 'Women are not looking at superficial attributes any more. They are looking at the whole of the person; what I feel like and how I project myself. This has become the heart of what we want to deliver.'

The result of Goldin and her team's work - she oversees almost 70 people in New York and 'hundreds' in Revlon's divisions across the world - is a storytelling campaign.

Starring the brand's latest Hollywood sign-ups, Olivia Wilde and Emma Stone, and stalwart Halle Berry, the campaign makes its UK debut next month. 'We wanted to create a world that's inspirational and accessible. It's not just "here's a model"; consumers can watch a story as it explains the product and places it into the life of a modern woman.'

One ad shows Wilde wearing the new ColorStay 16-hour eye shadow, following her as her make-up stays in place on a night out that continues into the early hours.

The campaign is the result of Revlon's agency relationship with Y&R, which picked up the account last summer. RKCR/Y&R is one of the agencies behind the campaign, and MediaCom was recently appointed to the global media account. While Goldin says the company had been experiencing 'strong, healthy growth in terms of financials', there was a need to 'accelerate the top line'.

'This is really why I came in; building strong brands should be at the heart of where the company goes. My remit was to reignite the brand to help global growth,' she adds.

'I had a real desire to see how much we could do. Making sure the point of view gets translated into the product, packaging, communication, the way we go to market in every country, was a great opportunity for me as a marketer.' 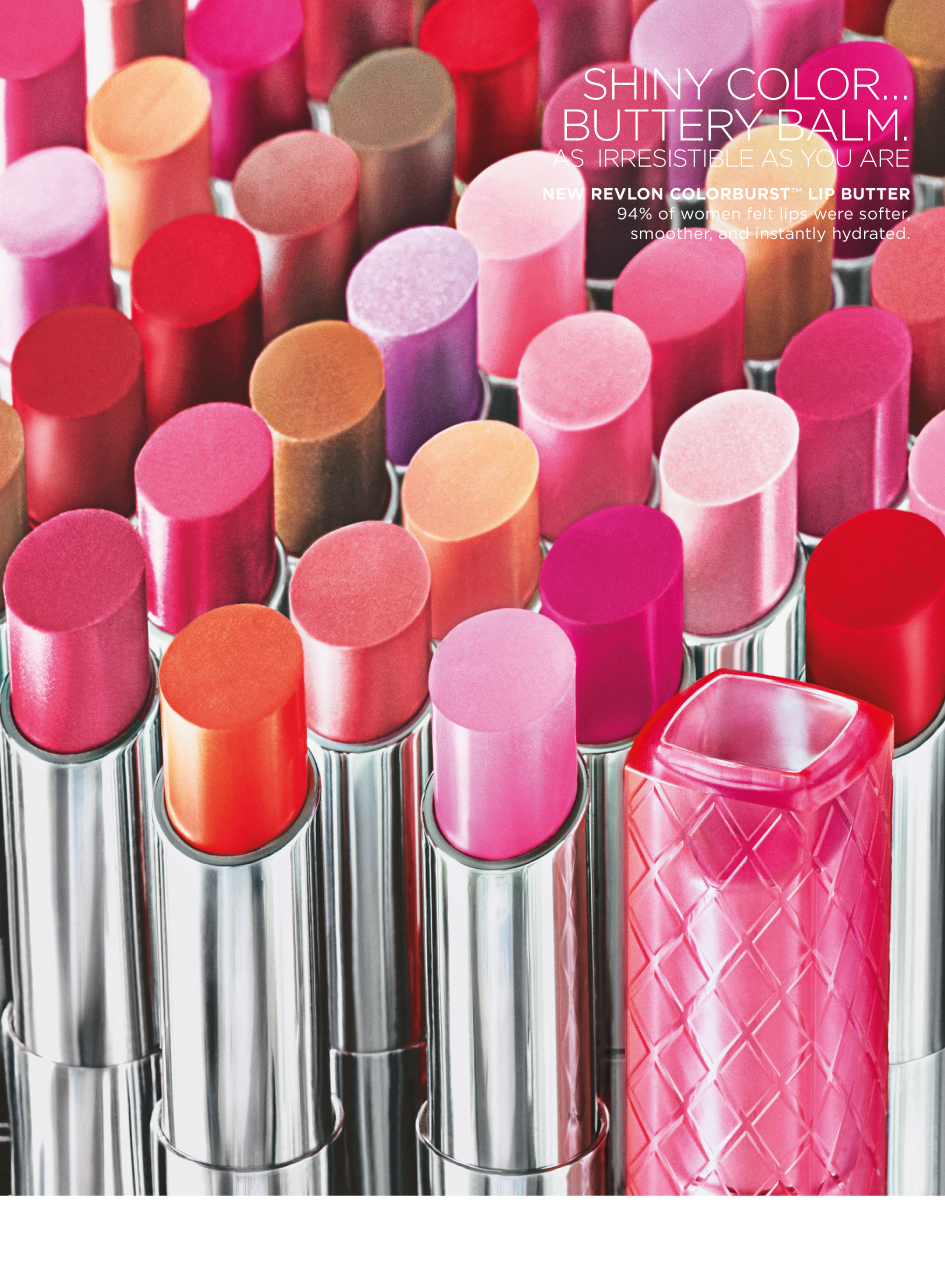 As testament to Goldin's approach, one of Revlon's new lines, Lip Butter, already has a waiting list in the UK ahead of its May release date, thanks to the social-media buzz initiated in the US. This has never happened for the brand before.

According to its own figures, Revlon has been one of the fastest-growing cosmetics brands in the UK in the past two years. The cosmetics market grew by 7% and 7.3% in 2010 and 2011, respectively; Goldin says Revlon's sales increased by 13.8% and 10.6% over the same period. 'No other brand has grown consistently ahead of the market like Revlon,' she claims.

The brand returned to TV in the UK only recently, but 2012 will mark its biggest ad investment for many years. Goldin pledges that Revlon's marketing spend will grow with the UK market.

'This is a really important market, so we want to regain the strength we had here,' she says. 'We have been focused on investing in the UK, bringing more innovation and communication here, doing more to connect with consumers - and that is paying dividends. This is why we have this stepchange in our overall communication, also with a strong focus on press and digital.'

Revlon has identified social media as a 'huge touchpoint'; it has 150,000 Facebook 'likes' in the UK. One of the biggest influencers for women is 'advice from strangers who have experience', says Goldin.

Blogging - particularly using the credibility of celebrity make-up artist Gucci Westman - and creating communities have thus been key strands of Revlon's marketing. 'It's not about shifting from TV to digital, but about the importance of each. Community creation is a huge role for a brand.' 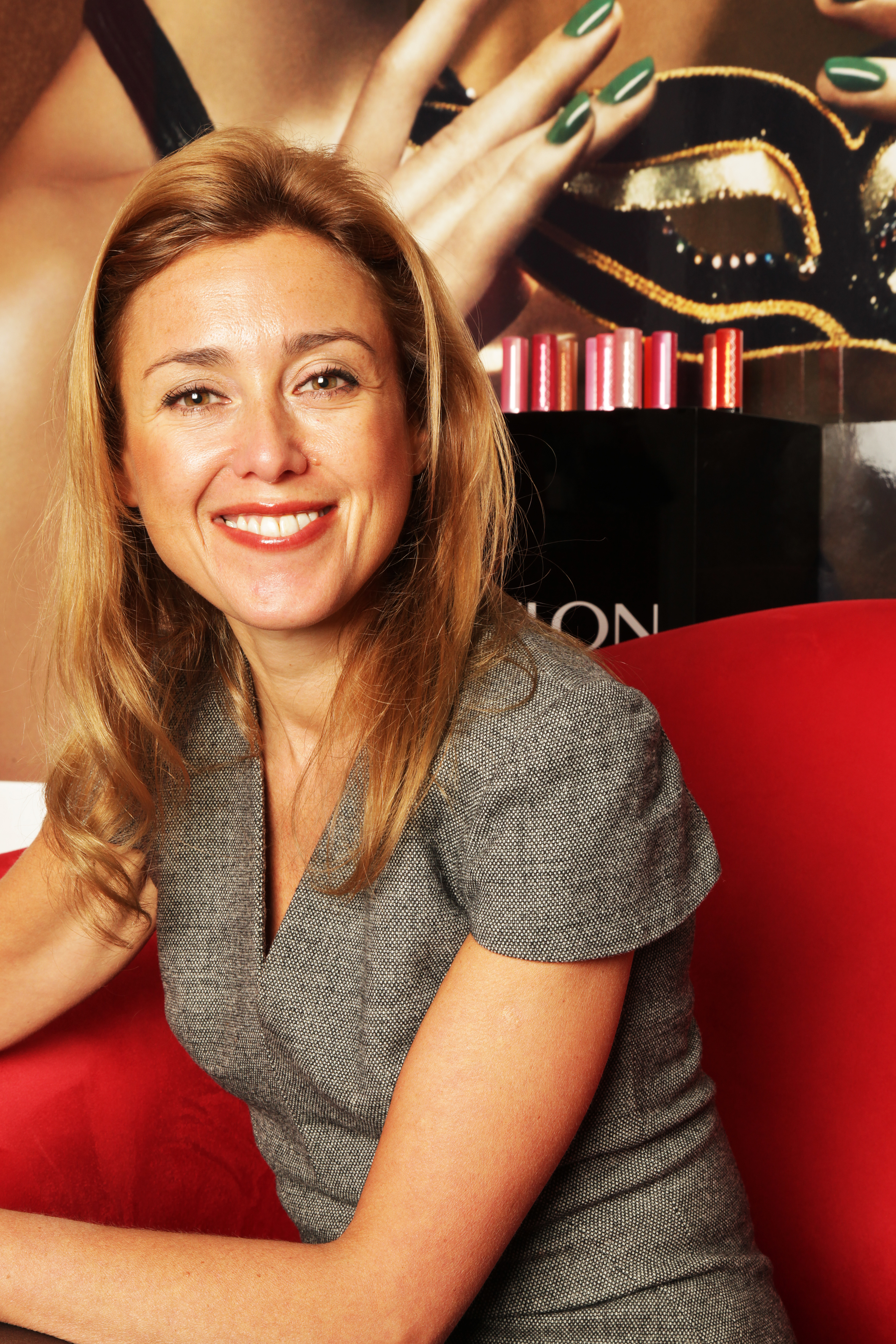 Goldin is a believer that marketers must understand modern technologies and not rely on their teams or agencies. When she lived in Japan, she saw many early examples of technology that are only now catching on in the West. 'You could walk into a mall, touch your phone to a QR code and get a map of all the shops. You would see special offers relevant to you and special menus at restaurants, as it knew from your profile that you liked vegetarian food, for example. It was a customised experience,' she says.

'I saw this three years ago. My point is that you have to be open and see what is out there. Innovation in this space is coming so quickly.'

As she juggles the demands of her global role, Goldin expresses a wish that she had double the time. Top of the list would be to spend longer in the marketplace, even if her job already takes her to the UK, China, Australia, South Africa, India and Latin America at least once a year. 'I have a complex life, like our consumers. I can't be on the road all the time as I have two boys at home; you have to live a life,' she adds.

Goldin does not view herself as 'just a marketer'. While 'people from finance and sales bring their strengths to general management', she says marketers must believe their skills are also suited to the top job.

'I am also responsible for the results of the business. My strength is creating a brand vision and inspiring products, communications and proposition. That doesn't preclude me from being connected to the business. Marketers have to see themselves as business leaders. This means translating your marketing into great results,' she adds.

After meeting the glamorous Goldin, there is no doubt that her 'vision' - a word that regularly punctuates our interview - is setting Revlon on a solid track to winning over consumers in the UK and beyond, looking for their own lipstick effect.

- To ensure the latest campaign is executed to plan in all countries, right through to in-store.

- To make Revlon more than a mid-market brand, while also fighting competition from cheaper and premium rivals.

- To create 'authentic' communities online that women want to be a part of. 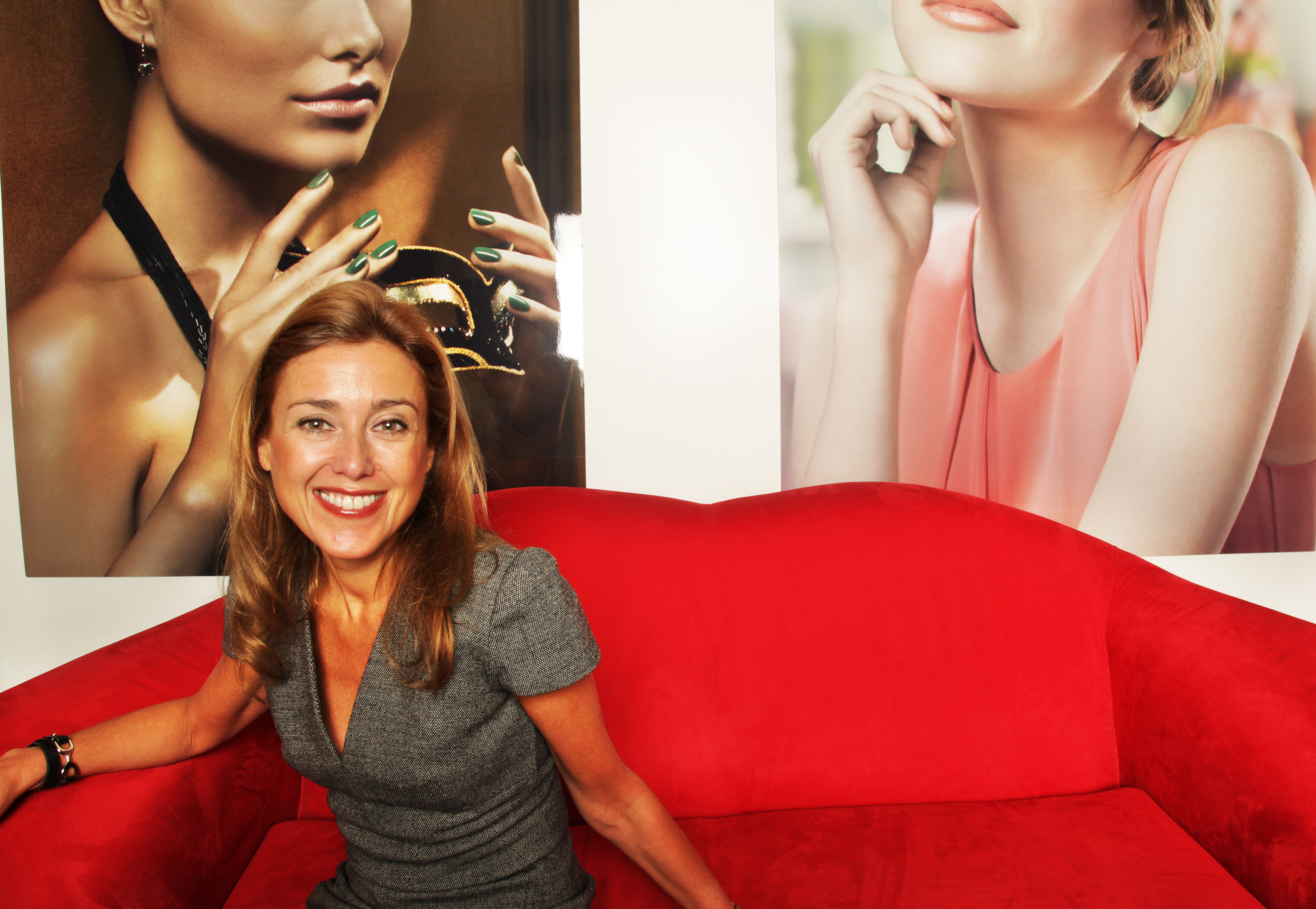 Favourite brand you have worked on (apart from Revlon): 'Diet Coke. It really answered consumer need at the time.'

'Most of my time outside work is spent with my family, especially my children. I love to cook dinner for the entire family whenever I can.

'I'd like to travel more and go scuba-diving, play piano, hiking, reading more books. There's just never enough time to do everything.'

Do you ever go back to Russia?

'Through my professional experiences, I have become a global person. I love New York's mix of global influences, trends and cultures. I have been back to Russia several times since living there and, in fact, I'll be there again soon on business. It is in my DNA to be open to the world.' 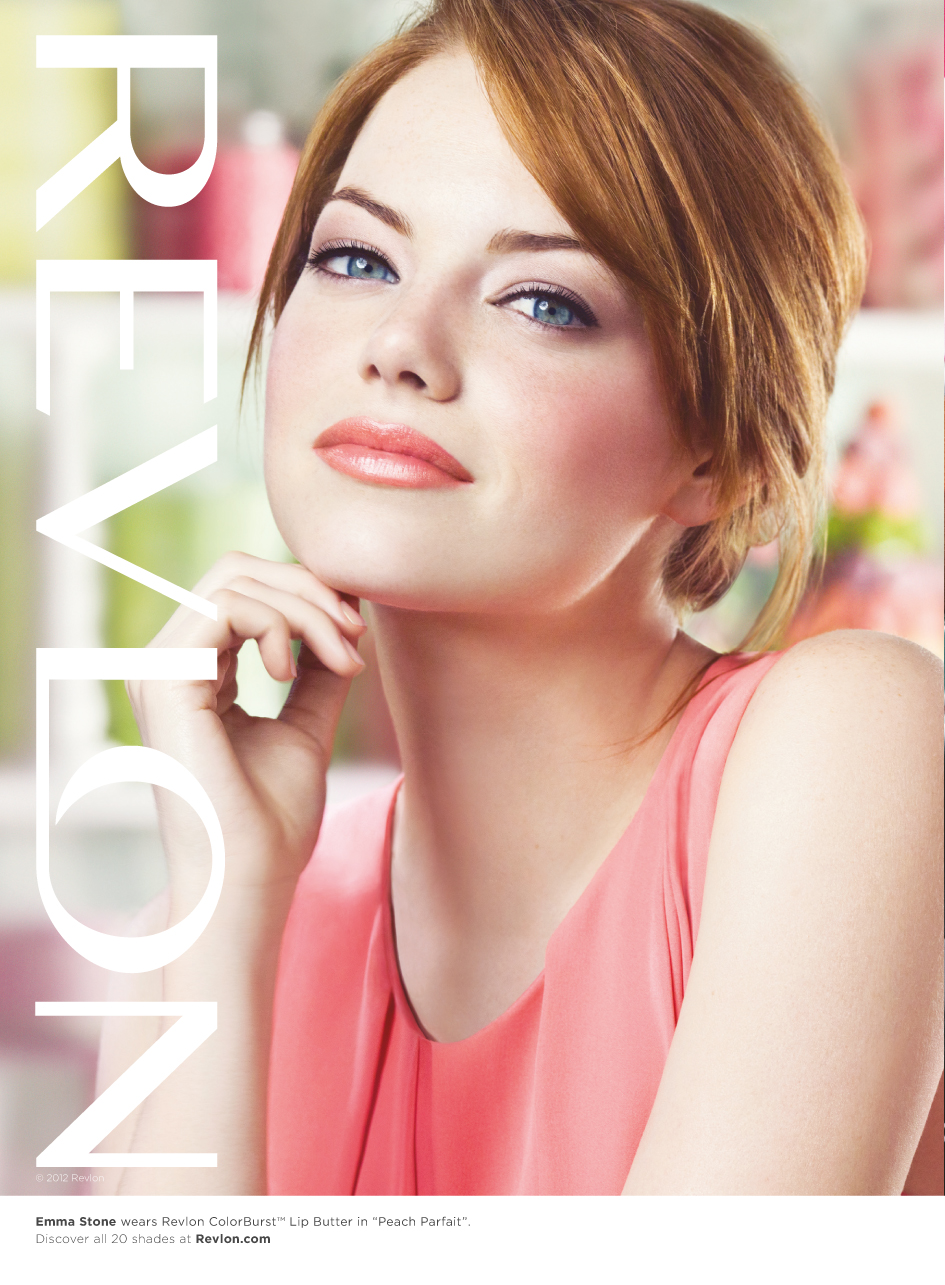 Revlon is kicking off the first ad in its new-look campaign from next month. The ads will feature Hollywood stars Olivia Wilde and Emma Stone, both of whom were signed up as brand ambassadors late last year, as well as Halle Berry, who has been a face of the brand for 15 years.

The first ad will focus on new foundation brand PhotoReady Airbrush, featuring Stone. The actress, who starred in Oscar-winning film The Help, will also appear in ads for Revlon's new Lip Butter range, out in May.

Wilde, who appeared in Tron: Legacy and played a young doctor in House, will front ads for new range ColorStay 16-hour eye shadow and PhotoReady 3D Volume mascara. The campaign marks the first time that Revlon has used one consistent creative for all its brands. Each ad has its own storyline, intended to connect the stars to realistic situations and stages of a woman's life.