The days of buying banner placements in blocks of thousands or millions of impressions could be numbered. With real-time bidding, brands are targeting specific online audiences on web pages as they browse.

The quickest-growing transaction in online digital display happens three times faster than the blink of an eye. It takes only 150 milliseconds for real-time bidding (RTB) to offer up a set of eyeballs to competing advertisers, hold an auction to decide who gets the impression, and then serve the winning ad.

RTB has been around for a few years, but it is only in the past 12 months that brands and agencies have been waking up to its possibilities. Financial services brands such as Allianz have been trialling the medium, including split tests across targeting segments and placements, varied creative and landing pages, time targeting, multi-channel attribution, and varying re-targeting tactics, all of which is delivered in split seconds. These have been delivered across sites including Top Gear.

Elsewhere, mobile operator 3 claims RTB has brought a 50% drop in cost per acquisition, because it has been able to test and evaluate its creative more frequently. Broadcaster Sky, meanwhile, is looking to invest more in RTB (see box, opposite page).

Researcher IDC predicts that RTB in the US will grow at a compound annual growth rate of 66% between 2010 and 2015, by which point it would account for more than a quarter of online display spend. In a study by Econsultancy with The Rubicon Project - which provides RTB for publishers such as Trinity Mirror and The Guardian - 48% of respondents said improved performance was a benefit of RTB. Among advertisers, 42% pointed to reduced media 'wastage', better targeting and lower cost per acquisition. 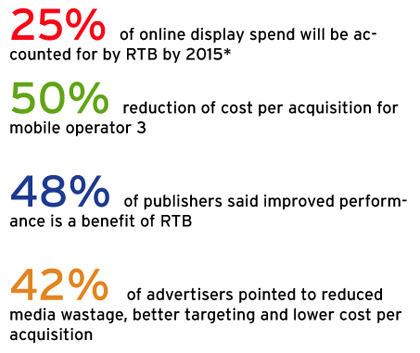 Hitherto, media buying has been a relatively analogue procedure involving picking up a phone, providing details about the target audience and negotiating a price. This would hit some of the target, but there was a lot of waste. RTB has changed the process of planning and buying media by automating large parts of it, including the creative element that is served. Crucially, it allows advertisers to buy on an impression-by-impression basis. As a page loads, information about who is viewing it is passed to the publisher, who offers it to a number of brands. The beauty of RTB is that it can combine the data that a publisher has about somebody on a website with the data held by a brand. This promises to give advert

isers a much more targeted ad, and one that is infinitely more valuable.

Consequently, ads served through RTB come at a premium compared with the commoditised inventory that is sold off on ad networks. 'RTB has the potential to massively reduce wastage,' says Martin Kelly, managing partner of Infectious Media, an agency specialising in the medium. 'It puts the value of an ad back into the hands of the buyer as they decide what it is really worth to them.'

For advertisers, RTB promises to make it easier to buy a campaign in the fragmented online space, says Nigel Gilbert, UK country manager at real-time ad technology firm AppNexus, which Microsoft is using for its RTB service. 'Operationally, it's a problem to buy from 400 companies with all the associated invoicing, individual campaigns and tagging - there is a big opportunity within online display,' he adds. 'In social and search you are essentially dealing with Facebook and Google. Agencies like that simplicity.'

Although RTB seems to fall into the ambit of the data analyst, it permits a different creative message to be delivered to each impression, says Kelly. 'For a company like Groupon, we can see the location of a person and pull in local ads suited to them,' he adds.

The context of the ad is also less important. Traditionally, a credit card company, say, would target ads specifically to finance sites, but RTB allows you to 'buy the audience' and serve up an ad to prospects on various websites. This obviously is of growing interest to publishers, too, who now have a tool with which to help brands target their audiences. It's a way of commercialising the data they hold, at a time when the free content model many adhere to is under pressure.

Jay Stevens, vice-president and general manager, international at The Rubicon Project, says it offers around 14bn impressions a month. 'We are the Sotheby's of digital media, running the auction on their behalf,' he adds.

For publishers, RTB presents an opportunity to improve the yield on their long-tail ad inventory.

These are the ads that are not sold by the direct sales team and which are currently offered through ad networks at discounted rates. With RTB, publishers can claim to offer a more targeted proposition than impressions bought blind.

According to Stevens, RTB has the potential to open up a new market, particularly at a local level, because it does away with many of the barriers to entry for smaller businesses. Search produced a new category of advertisers with millions of businesses that might previously not have thought of themselves as such. RTB could have a similar effect on the display market, he says.

'In the past, to be an advertiser you had to have an agency, a big enough budget, and you had to build creative. In the next 12-24 months the number of advertisers in the marketplace will grow through RTB,' he adds. Stevens suggests that search will be one of the losers to this growth. 'It's largely tapped out. When you talk to advertisers, the cost of search is enormous and it's getting to a point where there's saturation. The ROI does not pay off any more. For digital to continue to grow it has to look to other channels,' he explains.

It's not all rosy in the garden, though. RTB is in its infancy and there are challenges for advertisers, says Ben Downing, head of biddable media at Arena Media. 'It's extremely difficult for brands to get full transparency. Some agency trading desks are obscuring the true impression cost and offering no more transparency than blind networks,' he claims.

Delivering premium ad formats such as expandable ads, video and homepage takeovers is also difficult, he says, although this should change as publishers become more comfortable with RTB and give over more of their inventory to it.

Nicolle Pangis, president of 24/7 Real Media Europe, also urges caution about what RTB can deliver. 'Some people think it will take over 100% of the market, but I'm not that bullish. There will always be a place for reserved media. We'll find out over the next three to five years what the proportion will be,' she says. The company has just launched RTB functionality on its ad-management system Open AdStream. It aims to give publishers greater control over their inventory, in the process providing advertisers with top-tier inventory - a win-win for both sides of the equation, says Pangis.

24/7 Real Media Europe is just the latest arrival in a sector where multiple players are offering various flavours of RTB. There are huge areas of overlap in the RTB ecosystem and consolidation seems inevitable, argues Rob Griffin, global director of product development at Havas Digital. 'Everybody is hedging their bets at the moment to see where consolidation will happen, but they know it is coming. It is a confused ecosystem,' he says.

Such teething problems may be merely the inevitable outcome of any fledgling sector. What is clear is that advertisers are responding favourably to the promise of better targeting, validation of ads and customised creativity that RTB offers. And like everything else to do with RTB, it's happening fast.

BRAND VERDICT - Joel Christie is marketing controller at Sky Online. RTB accounts for around 15% of its sales.

'At present we use RTB primarily for direct-response-based advertising, but we have been looking into using it for brand campaigns, and increasingly for video on demand in the brand space. In the UK the trading desk model is still going through a state of change whereby everyone is finding their feet. We operate through our agency Mediacom's trading desk, and through others such as Infectious.

'When we went through the agency pitch process last year, the technical capability of our agency to operate in this space was of paramount importance to us. Also, by working closely with partners like Infectious, we are afforded far more control of our marketing both in terms of placement and bid management.

'RTB gives us a level of insight that we weren't typically getting before through our network buys. It can also enable us to be far more detailed around specific audience groups we want to target, meaning we can ringfence the group, put together some messaging we want to put in front of them and then go out and buy them. We have a universal product so mass marketing works for us, but for some of the products that need more detailed, rational messages, we can use digital, and RTB specifically, to put together a strategy to reach our target market.

'One of the main challenges is the visibility into the sites we are appearing on. We have trialled products which help with brand safety, but in some instances it caused issues with publishers, and affected performance. We took the view that until these anomalies are ironed out, we would focus instead on a list of blacklisted sites that we couldn't run on. That list is getting pretty long now, and will continue to do so at a very fast pace - so we really need to investigate the "ad safe"-style products and find a solution.

FIVE THINGS TO KNOW ABOUT RTB

- RTB is challenging the traditional way of buying display. Buying ads on an impression-by-impression basis will replace buying blocks of thousands of placements, offering greater transparency and control for brands.

- Those brands investing in search could have a head start with RTB as the disciplines share certain similarities. Both are data-centric, they enable bidding at the keyword level, and both need analysis and fine-tuning for optimal performance.

- Brand reputation is an important issue in this area. Brands must ensure that suppliers are using appropriate safeguards so that ads appear on sites that match both campaign and brand goals.

- The quality of ad inventory is still an issue, but this will change as publishers become more comfortable with RTB and use if for more than simply offloading unsold inventory. Private exchanges will also help brands forge closer links with individual publishers.

- Don't believe the hype. RTB is a fast-growing area, but it is still in its infancy and there will be twists and turns to come. Think of it as a useful new display tool and not a panacea for all online marketing challenges.

Think BR: Ad technology has boomed, now it must consolidate

Facebook plans to raise £6.5bn in IPO this month

Revolution: Special Report - Third parties make the most of mobile