Half of deal site purchasers admit to buying something they previously had no intention of buying, writes Ralph Risk, European marketing director, Lightspeed Research.

Lightspeed Research ran a survey on its UK online panel in June in order to understand how consumers are interacting with daily deal sites - what they think of them, and what, if anything they purchase. The results are based on 1,000 respondents.


The research showed that online consumers are widely familiar with daily deal sites - with 72% having heard of at least one.

Only 8% had registered on LivingSocial, with registrations on other deal sites at 6% or less.

Among those who have registered on a deal site, purchases were most likely to have been made from Groupon (29%) and eBay daily deals (19%) - not surprising, as these sites had the highest registration levels amongst respondents.

Overall, 54% of respondents who had registered on a deal site had made at least one purchase. 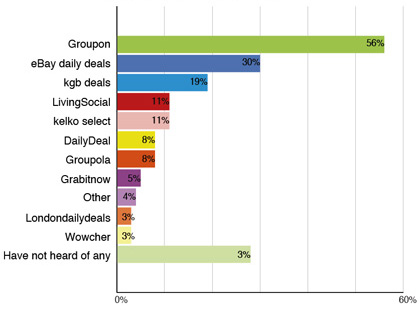 Deal websites where respondents have registered 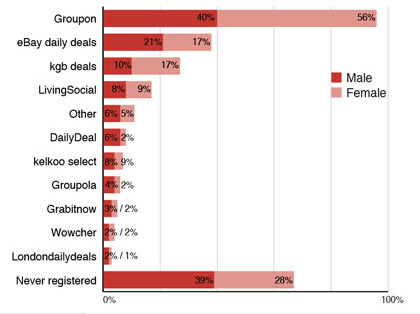 Among those who have registered but not purchased from a deal site, the main reason for most (59%) is that there haven't been any deals worth participating in.

A lack of funds and deal location were other reasons for not taking up offers (see Chart 3). 18-34 year olds are more likely to say they don't have the money, while those aged 35+ are more likely say that they haven't seen any deals worth participating in.

Main reason for not purchasing from a deal website

Source: Lightspeed Research, UK data
Base: Respondents who have registered at a daily deal site but have not purchased


Entertainment? It's a deal


Most (63%) of those that have bought from deal sites have made one to three purchases in the past 12 months, with buyers most likely to have made one (25%) or two (22%) purchases.

Men tend to be the biggest deal shoppers, with 10% saying they had made 10 or more purchases in the last 12 months.

Entertainment and event ticket deals are the most popular – a third (34%) have bought these deals. Electronics (27%), clothing (26%) and dining (25%) are also popular. Furniture deals (7%) are the least likely to have been purchased.

Spa deals have been purchased by 21% - and it's not surprising to see that they are much more popular with women than with men (Chart 4). Consistent with the purchasing behaviour identified by the research, men are more likely to have purchased almost every other type of deal.

Types of deal ever purchased 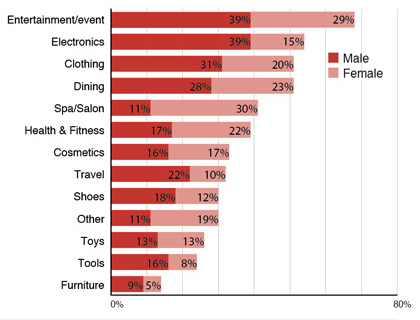 
Almost three quarters (64%) said they had been influenced by a deal to buy an item that they were undecided about - 18-34 year olds are particularly susceptible to the power of the deal (70%).

What's more, the influence of the deal doesn't end here - half (51%) of deal site purchasers admit to buying something they had no intention of purchasing due to a deal in their inbox. Once again 18-34 year olds were the most likely to succumb to temptation (59%) (Chart 5). 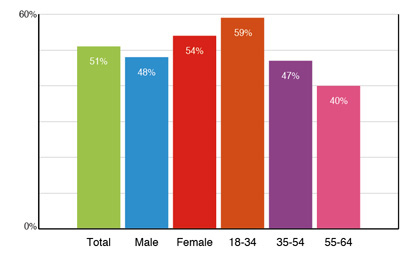 
Four out of 10 respondents who purchased a deal also bought from businesses near them geographically - increasing to 51% of 18-34 year olds.

And the value to the business making the offer isn't just in the deal sales - 51% of deal purchasers spent additional money with the business they got a deal from (58% of 18-34 year olds).

Men were more likely to spend additional money with a deal business than women (57% vs 46%). Almost half (46%) of those who bought a deal from a business have returned to use that business again - once again men are more likely  to do this than women (Chart 6). 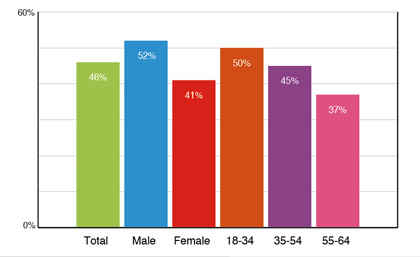 And deal buyers aren't just trying out new businesses - 41% have purchased deals for places where they have made full price purchases in the past.

Of those who have made a purchase on a deal site, only 16% have ever cancelled a deal site membership.

Ralph Risk, marketing director, Lightspeed Research Europe, says: "Everyone loves a bargain - and we know from the research we’ve already done in our series on e-commerce that a lot of online shopping is considered, and thoroughly researched.

"Seventy five percent of people check prices before buying what they are looking for and 87% do some sort of online research. Daily deal sites are different - the offers have a short shelf life and can be a little random.

"Our research shows that daily deals can encourage impulse buys on items consumers were either initially unsure of, or weren’t intending to purchase at all. There’s more work to do to raise awareness of daily deal sites, as well as to increase the appeal of offers that will help encourage more members to make a purchase."