The backlash from Murdoch's rivals to Jeremy Hunt's announcement to green light News Corp's proposed acquisition of BSkyB has been swift and firm with a joint statement describing the proposed undertakings as "smoke and mirrors".

The group has been lobbying the Department for Culture, Media and Sport since it took over responsibility for the decision from business secretary Vince Cable late last year.

Cable was stripped of the authority to preside over the outcome of the investigation after he was recorded saying he was 'going to war with Murdoch'.

In response to the DCMS announcement this morning, the group said: "It has been well-documented by former Murdoch editors that arrangements of this kind, including those put in place to protect the independence of the Sunday Times and Times, have proved wholly ineffective. Smoke and mirrors will not protect media plurality in the UK from the overweening influence of News Corporation.

"In addition, the undertaking does nothing to address the profound concerns that the takeover would give News Corporation greater power to restrict or distort competition through cross-promotion, bundling, banning rivals' advertisements and distorting the advertising market with cross-platform deals.

"We shall be vigorously contesting this whitewash of a proposal during the consultation period, as well examining all legal options."

News Corp's offer to spin off the channel into a separate company under the control of an independent board has sufficiently persuaded Hunt that issues over media plurality, the main concern upon which this final decision had to be made, have been suitably dealt with.

Opponents of the deal, who now have until 21 March to respond to Hunt on this specific undertaking, suggest it does little protect consumers from an enlarged News Corp operation, which already counts the UK’s leading newspapers among its assets.

Though the proposed takeover has cleared yet another hurdle, the media alliance said there was still an opportunity to have the deal referred to the Competition Commission, which would happen if Hunt decided the responses received within the consultation period successfully argued that the undertakings do not go far enough.

The lobbying group said it had repeatedly written to the secretary of state since the autumn to demand the negotiations not be conducted in the dark fearing it would result in a "perverse result", which it said had been delivered today.

Grassroots opposition is also being mobilised, with campaigning group Avaaz.org demonstrating at the Financial Times’ flagship Digital Media Conference this morning, where Jeremy Hunt and BSkyB chief executive Jeremy Darroch are both due to speak.

Reaction to today's announcement across the media has been equally vociferous.

How much exactly does the deal mean to Murdoch? According to the Today programme on BBC Radio 4, Andrew Neil put it like this: Rupert Murdoch "would have sold his granny to get the rest of BSkyB". 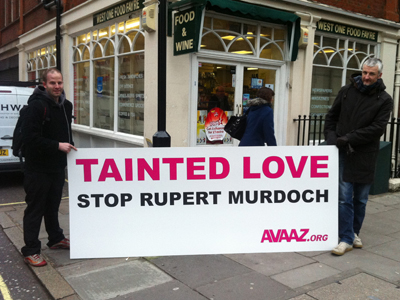 Protestors from Avaaz.org demonstrating at the Financial Times’ Digital Media Conference this morning