For the Financial Times, any debate surrounding print versus digital has moved on, and the 124 year old newspaper brand expects to be primarily a digital mobile experience by the time of the next Olympics, according to FT.com's leader, Rob Grimshaw. Media Week reports.

Speaking in the FT’s Southwark Bridge, London office the week after chief executive John Ridding called for staff travel to be restricted to "essential business" amid fears of a tightening advertising market, we can assume New York-based Grimshaw is not here for the pumpkin carvings.

Since becoming the managing director of FT.com in June 2008, Grimshaw has played a key role in positioning the Financial Times as a multimedia operation, and in developing cross-channel marketing opportunities for advertisers and agencies.

The business brand is often credited with having managed the digital transition better than most traditional publishers, with the launch of its re-imagined metered-model in September 2007 providing a template for paywall incarnations later adopted by the New York Times and, most recently, the Daily Telegraph overseas.

However, Grimshaw now believes the publisher faces its biggest challenge to-date as the speed of mobile adoption among one-time readers of print, driven primarily by iPad and iPhone usage, has forced digital strategies to be drastically revised.

When the FT released its first iPad app back in May 2010, ambitions were for it to receive perhaps 20,000 downloads in its first year. It smashed through that target in the first weekend – and that was before any marketing.

This momentum has continued, and since the FT’s pioneering, bold launch of its HTML5 app in June 2011, having decided Apple’s 30% cut and unwillingness to share subscriber data did not make good business sense, the app has attracted 3.3 million users. For Grimshaw, it signals nothing short of another seismic game-change.

The future is mobile 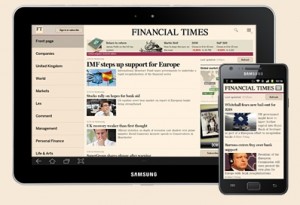 "My best guess is that mobile will be the lead channel for delivery within three to four years," he says. "Who knows, that could turn out to be conservative, this is moving at such speed."

"I think it would be complacent to say that we are ready for a change on such a scale. This is a really big deal. I think the switch to mobile is bigger in magnitude than the switch from print to desktop, in terms of what it means for the way people consume content, and it’s happening faster.

"So when faced with the prospect of moving every aspect of your business into a new channel in the space of a few years I would never be comfortable in saying that we are ready. But what I would say is that I think we are ahead of the marketplace."

Mobile already accounts for 25% of FT.com’s traffic and is said to be driving between 15%-20% of all new subscriptions, where iPad users lead the charge. Grimshaw suggests there is potential to grow this over the next year, when the brand will be celebrating an incredible 125 year milestone.

He says: "I don’t think we have fully optimised the experience yet. It still involves putting in credit card details and addresses and such. Someone buying a sub on a mobile device is not a trivial thing, so we’ve been surprised to see so much coming through so quickly.

"But we also see it on the usage side of things as well, so if you look at subscribers as a core audience, 30% of their pages views now are coming on mobile devices which is huge. Even if you look at the [user] base as a whole [including non subscribers], it’s over 20% now."

The FT’s success in attracting paying digital subscribers made industry headlines this summer, after digital surpassed the 299,000 print subscribers for the first time. Two weeks ago, in the publisher’s latest update, digital subscribers had reached 313,000 in September, up 26% year on year, cementing the brand’s position as a digitally driven operation. It helped lift FT Group sales by 7% for the first nine months of 2012, something of an antidote to the challenging ad market.

Grimshaw says: "We see that gap widening steadily over time. We continue to put great effort into the print side of the business, that’s got a lot of years left in it yet for sure, but the growth and the opportunity to extend the franchise is all on the digital side."

For marketers, the growing base of digital subscribers, and the more than five million registered users to FT.com, means a rich data pool of personal and business information on individuals. Increasingly sophisticated insights and analytics tools are being developed to help advertisers plan campaigns, like its proprietary Deep View. The latest addition is Smart Match, which enables clients to match content to relevant news stories on FT.com in real time using "semantic profiling".

The MD describes such targeting capabilities as "gold dust for marketers", and says media agencies remain "key" in helping them maximise its potential. He adds, however, that it’s becoming an increasingly complicated marketplace, involving more partnerships than ever before.

He notes: "There are instances now where we are putting together creative on behalf of clients, particularly around mobile, because they are finding their agencies unable to deliver either any mobile copy or great mobile copy, and we’ve kind of been rolling with that."

For his part, Grimshaw says he's "really proud" of what the FT has achieved in mobile so far, but his hope, like that of many publishers mass and niche, is that tablets in particular can live up to their potential of driving subscriptions and ad revenues.

As a specialist publisher the FT can charge higher CPMs than the general newspaper sites, but it too has struggled to make web ads alone pay the bills. This has to be a concern as print sales continue to ebb away, falling from more than 450,000 10 years ago to fewer than 290,000 today.

Nielsen figures track FT print revenues up 3% for the year to October 2012, to total £67.4 million. It's a solid performance in the prevailing climate, but remains 34% below the paper's pre-recession highs of £102 million in 2008. How much of this loss has been offset by online spend is impossible to ascertain given the brand's position nestled within parent group Pearson.

He is quick to stress that online ad revenues have increased "every single year, certainly since I’ve run FT.com", but admits that, like all publishers, they are up against "some gigantic competitive forces" in pure play digital operations, who collectively take two thirds of all display revenues in most developed markets.

"The two which are always front of mind are Google and Facebook, because they are smart and sophisticated with data," he admits. "This is the big thing with online advertising. What agencies and advertisers are trying to take advantage of is the ability of digital to put their creative right in front of their target audience, and what drives that is smart use of data to get the targeting absolutely spot on."

Breaking from the press industry's parochial tendency to consider its competitive set only in terms of rival publishers, he adds: "Facebook pulls a trillion page views per month, that makes them 1,500 time bigger than the New York Times. Google’s in a similar sort of league.

...What that means is it puts a cap on our growth potential with online advertising, we can grow it but we can’t scale it in the way that we’d like."

Tablets, with their longer dwell times, bigger screens and interactive ads should be an easier proposition commercially for a publisher positioning itself as a niche title driven by quality content. The publisher’s latest foray is its FT Windows 8 app which was available, pre-installed on some Sony and Samsung devices when it launched last week.

"There will be great ways to make money in the mobile space, I’m very confident about that," says Grimshaw, who also believes that the support offered by his management team will be "crucial" going forward.

"If you are to get the scale of change that you need in an organisation at times like this then you have to have real buy-in and backing from the Board," he says. "A big part of the success that we’ve had with FT.com has been buy-in from my colleagues round the board room table. We have at times had to take some very difficult choices and go down some difficult roads."

Difficult, but so far astute if the decision to come out of Apple’s iTune is any indication. Since the move the FT’s iPad and iPhone traffic has reportedly increased by 70%. Meanwhile, digital revenues are expected to represent "more than 30%" of FT's revenues by the end of the year. Proof perhaps, that sometimes it does pay to stand by your convictions.

Campaign and Newsworks team up to hold Tablet Media Summit